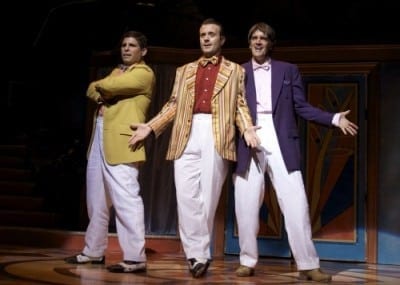 Georgia Shakespeare’s Shrew: The Musical transports Shakespearean comedy to a glitzy 1930s Miami setting, with Broadway-style singing and dancing and heart-aching, show-stopping ballads. Even longtime Georgia Shakes fans might be astonished at the result: a rousing, laugh-packed performance with all the talent and polish of a big New York show. To celebrate the company’s 25th summer, its familiar actors are showing audiences that they can sing and dance as well as act. Shrew: The Musical will continue through August 8, in repertory with Love’s Labour’s Lost (which opens June 24) and King Lear (opening July 8).

References to Gone With the Wind and Southern cooking mix with jokes about Miami, Cuba and Boston. Costume designer Doug Koertge’s vintage 1930s fashions and the pop-styled Broadway numbers give the production a Guys and Dolls atmosphere.

Park Krausen as Kate and Joe Knezevich as Petruchio generate the maximum electricity from the couple’s sexual and verbal conflicts. Married in real life, they display a graceful compatibility. Their comedic and musical grace helps soften the tedious plot points of a husband subjecting his wife to a series of humiliations. As Kate, the fiery and combative shrew “tamed” by Petruchio, Krausen finds emotional complexity in a character that could easily fall into stereotype. In two poignant solo ballads, “Dice of Love” and “Love Made a Fool,” Krausen smolders with passion, bewilderment and heartache. Her lovely singing voice breaks, quivers and rises, full of love’s torments. Later, when Kate finds joy and happiness with Petruchio, Krausen sings and dances with high-wattage exuberance. (Photos by Jen Hofstetter.)

Knezevich plays Petruchio with the right combination of cockiness, wit, insolence and masculine insecurity. Charting the character’s growth from superficial young buck to thoughtful, caring husband — with Shakespearean irony he is as “tamed” as Kate — Knezevich displays a full emotional range. His virtuoso dancing and hipster singing evoke the nonchalant style reminscent of American vocalists from Bing Crosby to Harry Connick Jr.

With music and lyrics by director John R. Riggs and Dennis West, Shrew: The Musical was first performed by Georgia Shakespeare in 1993. Paying homage to American songbook greats such as Harold Arlen, George Gershwin and Johnny Mercer, the show’s songs have a generic familiarity. The dance numbers, choreographed by Jen MacQueen, are high points. Georgia Shakespeare veteran Chris Kayser as Petruchio’s pal Grumio exhibits his signature comedic gifts. His and Knezevich’s perfectly modulated dance number up and down steps is a highlight early in the performance. (Bottom photo: Brian Kurlander as Hortensio, Joe Knezevich as Petruchio and Chris Kayser as Grumio.)

Neal A. Ghant, one of Atlanta’s most versatile actors, gives a mellow, sweetly nuanced performance as Lucentio, whose courtship of Kate’s sister Bianca unfolds as a contrasting parallel to the relationship of Kate and Petruchio. As Bianca, Georgia Shakespeare newcomer Ann Marie Gideon glows with perky musical talent and acting flair. Her tender duet with Ghant, “Dreamin’ of You,” stands out.

The performance closes with the heart-pounding, uplifting “Dancing With the One I Love,” in which the entire company swings. Their joyful affirmation of life and love recalls the musical numbers that reportedly closed even the most tragic of Shakespeare’s plays in Elizabethan times, an enduring spirit of entertainment that fills Shrew: The Musical.