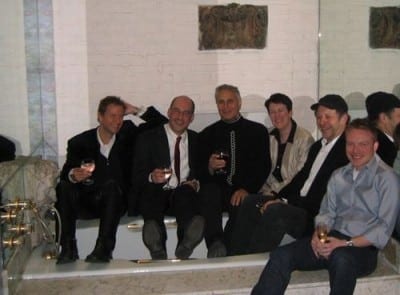 Eavesdropping on Facebook: “I’m sorry, saxes. You know I love you”

Update 6/16/2010: This piece was originally published by ArtsCriticATL.com in September 2009. It’s an example of classical musicians using social media in unexpected and successful ways — the topic of the panel discussion I’ll be on this week at the League of American Orchestras and Chorus America conference. — Pierre

Listening to a finished piece of music is a pleasure; the sausage-making elements of composition can be rewarding, too. Letters Mozart wrote to his father, Strauss wrote to Hoffmannstahl, or Stravinsky wrote to his publisher, detailing their thoughts during the act of creation, are illuminating documents. Exploring creativity is one part of it, but so is the advice that’s given, and the aesthetic, political or economic realities embedded in that advice.

With social media like Facebook, the exchanges can be savored from afar, and in real time. John Mackey, a fine composer who writes high-energy music for wind ensemble and lives in Austin, Texas, is writing a trombone concerto. He has the New York Philharmonic’s Joseph Alessi as soloist and a New Jersey concert band for the premiere, but he wants to give the concerto a longer life. Deadline is November. Already several weeks into it, he’s been posting updates to his Facebook friends.

Early this afternoon, he posted a new status update:

John Mackey can’t decide whether to put saxes in the Trombone Concerto. Was going to score it for “orchestral winds,” but I’m missing the sax section in the quiet sections.

There are no saxophones in standard orchestras, but the instrument’s unique sound, especially low and soft, is a powerful attraction. Within minutes, Mackey’s circle of contacts — he’s got almost 2,000 “friends” — started chiming in:

Friend 3: I say no. This way orchestras can do it without having to pay for 4 sax subs. And in this economy…

Friend 5: You certainly need no advice, but Stravinsky in his symphonies of wind instruments does some nice things in his softer passages, sans saxes. Maybe use him as a model? Or Schwanter perhaps?

Friend 6: I’m a bit of a purist and prefer heckelphones, ophicleides and sarrusophones to these new-fangled saxophones…

Friend 6 again: You could always generate parts for us saxes with all movements labeled “Tacet”. Wouldn’t be the first time…

Friend 7: Saxes = orchestras having to hire additional players. Optional, cued parts, maybe, but [Friend 3] is right – in this economy, to get performances, I would go without.

John Mackey: This is what I’m worried about. No saxes=anybody can play the piece — bands or orchestras. Saxes=only college performances. But man, no saxes, AND no contrabass clarinet AND no strings = a challenge that may not be worth the tiny chance that an orchestra would ever program the thing anyway, even if Joe Alessi were the soloist. And it’s tough to beat a pianissimo chord with just saxes and contrabass clarinet…

Three hours and some 35 messages later, Mackey returns with the definitive status update:

John Mackey: Well, an email this afternoon from one of the major orchestra conductors in the US confirms interest in the piece — if it’s scored for orchestral winds. I said “like the Stravinsky Concerto for Piano and Wind Instruments.” I think that helped. There’s obviously nothing to say that an orchestra will touch the piece with or without saxes, but without, they’ll at least look at it. I’m sorry, saxes. You know I love you.

NOW curiosity is piqued to hear how this concerto turns out. I don’t think Mackey was fishing for publicity when he posted on Facebook, but in collecting like-minded friends and posing an interesting question, he effortlessly drew his fans and colleague into a discussion that took a life of its own — on Facebook and on media outlets like ArtsCriticATL.com.

This is particularly interesting just now. Arts groups are desperate to engage potential patrons — and finally realizing that it’ll have to be on the audience’s terms. This is a radical shift in strategy, forced by several long-term factors and the miserable recession. Most arts institutions are so used to one-directional relationships with their audiences — we perform, we control the message; you buy tickets — that striking up an open-ended conversation via social media, and hoping it goes “viral,” seems like the start of an enlightened new era.

On an equally fascinating topic, Mackey’s Web site includes this bathtub party picture. Left to right: composer Mark Adamo, conductor Robert Spano, composers John Corigliano, Jennifer Higdon, Steve Reich and John Mackey. Read into it what you will … and post your opinions on your own Facebook page.