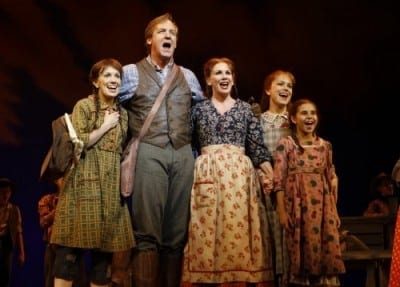 You couldn’t ask for a more family-friendly musical theater experience than “Little House on the Prairie: The Musical,” which is playing through June 20 at the Fox Theatre as the opener of Theater of the Stars’ 2010 season. Based on the beloved series of books by Laura Ingalls Wilder about 19th-century frontier life, with a hit TV series to stir the memories of baby boomers, it’s as corny as Kansas in August, but the perfect attraction for parents and daughters to see together, a G-for-gee-whiz-rated confection of inspiration, girl empowerment and quasi-history lesson.

You could, however, ask for better music. And lyrics. And a story that has even a whiff of dramatic tension. The musical aspects of “LHOP” — thanks go to composer Rachael Portman and lyricist Donna di Novelli — are thuddingly mundane and forgettable. But Francesca Zambello’s staging is so vital and the cast so pumped that they can lift up even mediocre material and connect with youngsters in the audience, if not so much with theater fans who appreciate that a good musical needs, well, memorable melodies and interesting lyrics. (Photos by Carol Rosegg)

The name-dropping gimmick here is that Melissa Gilbert (top photo, at center), who played young Laura on the Michael Landon TV series in the ‘70s, is now playing the role of Ma. Gilbert is fine, and clearly an audience favorite, but the show really belongs to Kara Lindsay (barefoot, above), who plays the teenaged Laura. Lindsay has spunk to spare, can belt with the best of them, but most importantly radiates joy at being who she is and where she is: a strong-willed tomboy with a lust for life as broad as the Dakota Territory sky under which she and her family are homesteading.

Her key relationship is not with her Ma (who’s the voice of common sense or a bit of a buzzkill, depending on the situation) but with her Pa (Steve Blanchard, with a soaring baritone), who tries to figure out how much rein to allow his headstrong daughter in their dangerous new location. And later with Alonzo Wilder (Kevin Massey), the young farmer who awkwardly courts her as she matures into a young woman. Also standing out: Kate Loprest (bottom photo, at center), who brings comic relief as Nellie Oleson, Laura’s nemesis/rival, a spoiled prairie princess who sparkles like Kristin Chenoweth every time she’s on.

These actors lead a strong ensemble that sings and dances for all they’re worth — and for more than the material is worth — calling to mind shows like “Seven Brides for Seven Brothers” and “Oklahoma!,” even though musically “LHOP” is not in their league. And the staging is very inventive, particularly the lighting, which is used to establish mood and changing seasons and frequently evokes the beautiful soft light of the heartland.

There aren’t a lot of memorable lines in “LHOP,” but early on, Laura is pleading with her Pa to drive his team of horses. “It scares me so much, I just have to try it,” she says, which is a pretty cool way to approach life. If you have a daughter who’ll perk up at a line like that, then “Little House” is worth a visit.