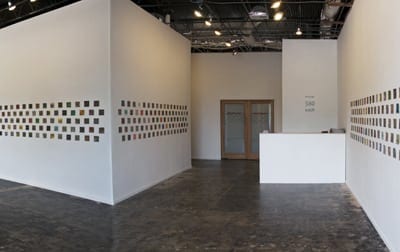 Andy Moon Wilson’s “Laserwarrior” at Get This! — the artist’s mind in 500 four-inch squares

Maybe little boys are made of snips and snails and puppy dog tails. Bigger boys, to judge by Andy Moon Wilson’s solo exhibition at Get This! Gallery, are made of comic-book grotesques and weapons and hallucinatory doodles in saturated colors.

Like a manic master jeweler, the Atlanta artist inscribes intricate line drawings, wily caricatures and dense complicated patterns on 4-by-4-inch squares of paper — 500 of them, to be exact — filling in with vivid color so that no millimeter of each tiny picture remains untouched. (Medievalists call this ”horror vacui”; today we might call it OCD.)

Perusing “Laserwarrior” is like paddling down Wilson’s stream of consciousness. Macho street talk, guitars and onion-dome roofs abut doses of dizzying  patterns. Except for the pixillated compositions that relate to his work as a carpet and rug designer, however, there are no references to his life as a husband and father.

Funny, Wilson, who is in his mid-30s, appears to be an adult when you meet him, and a soft-spoken one. Give him a pen and an teeny piece of paper, and he becomes a kid again.

Wilson will give an informal artist talk on Saturday, June 19, at noon.

Saturday is also your last chance to see Prema Murthy’s work at Saltworks next door. The former Atlanta artist’s exploration of the grid as a physical and symbolic construct comes to life in the installation “Breaking the Grid (Tarnac 9).”

Named for French anarchists on trial for disrupting the flow of electrical power (and, metaphorically, authority), the piece activates its corner of the gallery with a cat’s cradle of fuzzy black yarn strung into triangular patterns set against black triangles painted on the adjoining walls.