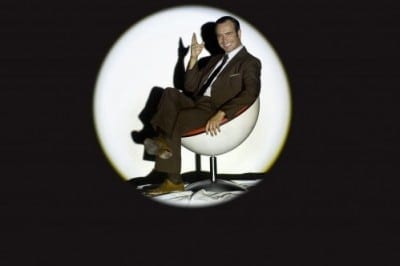 Parodying Agent 007 and cheesy 1960s flicks, Mike Myers’ groovy cryogenic spy beat this satirical French series to the punch onscreen. But on the page, Gallic pulp scribe Jean Bruce produced his first book in 1949, several years before Ian Fleming published the first James Bond title. Bruce’s secret agent, saddled with the name Hubert Bonisseur de La Bath, served as the hero in a handful of French movies from 1956 to 1970. (No, I haven’t seen any of them, either.)

Four years ago, director Michel Hazanavicius brought Hubert out of cinematic retirement, but with a postmodern (or is it meta?) twist: Rather than a suave, brilliant, multilingual agent, the guy is a clueless, sexist disaster. Um, yeah: Myers’ movies pulled the same trick. But the “OSS 117” films offer the illusion that they’re genuine artifacts from the 1960s.

That’s one of the best things about both “OSS” movies. With their faux-yellowed film stock, groovy split-screen imagery, clunky effects and fab-mod fashions, they’re a retro visual delight. The scripts, though, play the same joke over and over again, with no build or real payoff.

Still, “Lost in Rio” and “Nest of Spies” are worth a look for their spectacular secret weapon: star Jean Dujardin as Hubert. Blundering his way into 1967 Brazil, in search of a Nazi who’s blackmailing the French government, Dujardin manages to be both a complete, repulsive oaf and weirdly sexy. I would say that only the Gauls could pull off such a combination … but that would sound like the sort of reductive, stereotypical thing Hubert Bonisseur de La Bath might say.