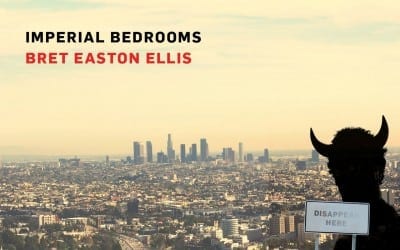 Review: Bret Easton Ellis’ “Imperial Bedrooms,” where the only thing real is what you desire

Hollywood has ever sold only one dream, endlessly and repeatedly, and that is sex. (Movie violence is its nightmare product, often subservient to the dream.) It is a dream that consumes the very people who produce the movies, write the stories, cast the beauties. The need for recognition warps them, in Bret Easton Ellis’ view of movieland, until there’s nothing left of them but their perversities.

The successful screenwriter Clay is the sex-questing anti-hero of “Imperial Bedrooms,” whose Elvis Costello-inspired title connects to “Less Than Zero,” Ellis’ 1985 debut fiction that this novel is a sequel to, catching up with Clay and his band of debauched rich-kid L.A. friends 25 years later. (Author photo by Jeff Burton)

Clay returns to his hometown after a brief stint in New York, becoming infatuated with a breathtaking unknown young actress he meets at a party. Drifting from party to party, buzzed, retreating to his skyscraper condo with its “epic view of the city,” taking or avoiding phone calls — everyone in Hollywood is addicted to their phones, their faces perpetually lit by the glow of their cells — he is intensely aware of the physical beauty and glamour of the people around him, at one with easy luxury.

Just as the reader settles into these beautiful surroundings, ready to be seduced — for Ellis’ style is one of minimalist hypnotic run-on sentences that dismiss punctuation and pull you along their rolling cadences — a noirish mystery envelops the situation. Clay is under the constant surveillance of someone in a blue Jeep. The creep keeps sending him disturbing anonymous text messages. Clay is puzzled and sometimes disturbed by this as he pursues the young actress, a wholesome, blond Midwestern chimera with the fake-pure name of Rain.

Clay puts into play the well-worn formula of the casting couch, holding out a promise to put Rain into the big movie he’s working on if she gives him what he wants. Immediately Rain signals her willingness, emailing him nude pictures of herself, acting for all she’s worth to convince middle-aged Clay of his desirability. Having enacted this tableau a thousand times before with others, Clay knows her attraction to him is just pretend and confides, “What keeps me interested — and it always does — is how can she be a bad actress on film but a good one in reality? This is where the suspense of it all usually lies.”

There is a script he has in mind that she needs to follow to please him, and when she veers off, disappears, stops answering his calls, he loses his cool and we begin to see the cracks in his façade. The mystery that he becomes entangled in involves Hollywood people tortured and executed by Mexican hit men connected to a drug cartel. And a prostitution ring. A seedy player named Rip, whose face deformed by facial surgery brings Mickey Rourke to mind — “it’s a face mimicking a face and it looks agonized” — shares Clay’s obsession with the untalented goddess Rain.

Slowly Clay is unmasked as something uglier and more ruthless than the smitten lover of Beauty he presents himself to be. In the unfolding mystery, he commits one of the worst acts of treachery.

And the ambitious Rain possesses a needy beauty devoid of goodness or grace or any of those lofty qualities we imagine to be true of the lovely. She already knows that the important thing in life is not love or loyalty; it’s the opportunity to become known, to have a movie career. The moralist in Ellis well knows how to spin a tale about the grotesque lives of the beautiful, and he does it in his own bracingly laconic way.