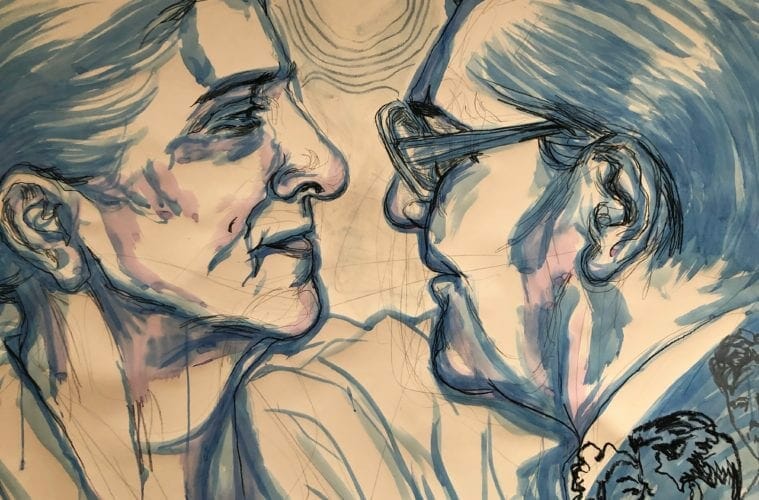 "Los Caldos del Sur" (2019) is part of "Of Origins and Belonging" at the High Museum of Art through September 29. (All images courtesy of the artist)

In the studio: Jessica Caldas on art, family heritage and women’s issues

Atlanta-based artist, advocate and activist Jessica Caldas uses drawing, collage, sculpture, installation and performance to create work inspired by the experiences and challenges of women. She doesn’t shy away from serious issues, addressing domestic violence and the trauma of sexual assault in such bodies of work as Carrying On, #3everyday and Four Letter Word. She has addressed gun violence and mental illness as well.

She’s moving to Florida in September but says she’ll be back every month. For now, you can see her work in From the Artist’s Collection (through August 31) at MINT gallery and in Of Origins and Belonging (through September 29) at the High Museum of Art. Artist, advocate and activist Jessica Caldas and daughter Aria visit her work at the High Museum.

Her five drawings at MINT capture an ominous tension with smiling portraits, layered text and dripping watercolor paint. At the High, she delves into her Puerto Rican heritage with a hand-drawn representation of a photograph depicting her grandparents dancing at their wedding-anniversary party.

Caldas, 32, recently graduated with an M.F.A. from Georgia State University, where, as an undergrad, she concentrated on printmaking. This puts her at a pivotal point in her career. Her work at the High, for example, introduces an investigation of the complex narratives, or myths, that make up her family history. The drawings are a respite from the often-stressful issues-based work she does. They grapple with how her identity is tied to her family’s migration from Puerto Rico.

She ponders how this heritage might shape 19-month-old daughter Aria’s identity too. “Many Americans deny that Puerto Ricans are Americans and do not know what’s going on [there] or why the island is in the state it’s in,” Caldas said during a recent studio visit with ArtsATL. “Visiting the exhibition again, there are definitely things I would like to do differently around this work in the future. I learned by making this piece . . . that [it] is going to grow and change over time.” Her studio in Georgia State University’s Ernest G. Welch School of Art and Design building was an open room with pieces from her Tired Bodies work suspended from the ceiling and drawings pinned to the walls. Rolls of paper rested beside the door as she prepared to move out. She plans to continue exploring her Puerto Rican heritage through her studio practice while acknowledging that much work remains to be done to promote gender equality and women’s rights.

Another pivotal point in Caldas’ career came in 2015—17, when she did the #3everyday series of guerrilla-style performances and connected with the women who would later form the Living Melody Collective. The women — including Haylee Anne, Angela Bortone, Danielle Deadwyler and Angela Davis Johnson — have their own practices as well.

They created the Live the Legacy II mural for the Center for Civil and Human Rights and painted a Hope for Georgia school bus to promote voter engagement during the 2018 midterm elections. The bus was parked outside The Bakery arts complex in southwest Atlanta and referenced the 1961 Freedom Riders as a form of civic intervention. The women also took part in February’s Tempus Projects residency in Tampa, Florida, creating the gallery show Notions of Saintly Flesh.

We’ll be watching for the next pivot in Caldas’ artistic life.