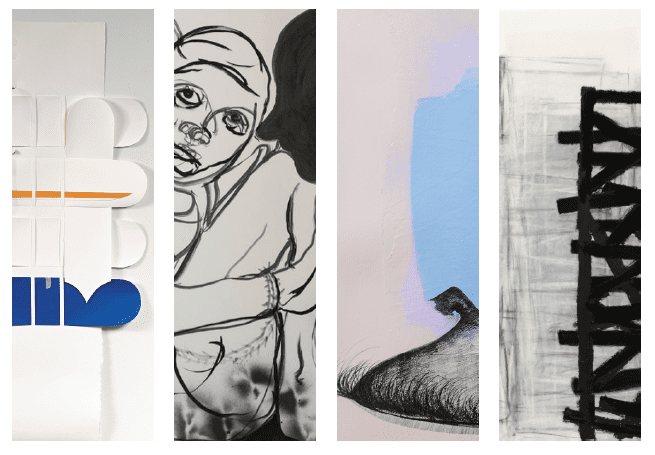 Work by Krista Clark (from left), William Downs, Yanique Norman and Rocio Rodriguez shares the space in Recent Drawings at Sandler Hudson Gallery. (All images courtesy of the gallery)

Review: In Sandler Hudson’s “Recent Drawings,” it’s sort of all in the family

Recent Drawings: Krista Clark, William Downs, Yanique Norman and Rocío Rodriguez, at Sandler Hudson Gallery through September 14, shows us how very different media can produce parallel visual effects, and how family resemblances can allow them all to be called “drawings.”

Krista Clark’s use of construction materials is the subject of a recent ARTS ATL feature and an August 13 artist’s talk at MOCA GA, so I’ll just say this: Her collages on paper violate so many rules of drawing that it’s tempting to call them collage or wall sculptures. Not only do the overlays and gaps take the work solidly into the three-dimensional realm, a thin cord linking two pieces makes it uncertain where one ends and another begins. This untitled 2019 piece by Krista Clark is made of paper, construction fencing and insulation. It measures 78 x 30 in.

As with her other construction materials’ work, an extraordinary number of visual metaphors can be read into them — psychologically, materially or in terms of economics.

For this exhibition, however, the wall that holds Clark’s works seems to interpret them primarily as pure form. Witness the parallels of shape between parts of these pieces and Rodriguez’s adjacent pastel-and-charcoal works on paper. Granted, the lines in Clark’s Untitled (2019) are made of construction fencing, and the rough-edged rectangles in Block by Block (2018) with insulation and roofing, graphite and pastel. The effects, however, are ultimately recognizably akin to the alterations of geometry that Rodriguez achieves with charcoal and pastel.

Rocío Rodriguez’s new work uses calendar dates as titles — ranging from December 31, 2018, to May 14, 2019 — but there isn’t a linear development of style or subject matter. The stripes/narrow bars overlaid on rectangles in one work are similar to those in another and later turn into a single intervention. This sense of multiplicity continues in William Downs’ drawings, made of ink wash and spray paint on large sheets of paper. It’s difficult not to think of the later refinements of African American sociologist W.E.B. Du Bois’ “double consciousness.” Today, the self is said to be multiple regardless of ethnic origins and inflected by gender and social position in a country still devoted to degrees of ethnic dominance. Unfortunately, this tangle of colliding ideas is so fluid, it reaches flood stage. If only Downs would give us more information about his works instead of just their provocative titles — Drawing spirits all night; Look at Ada; Tyson; Spirit and Presence. The flowing lines and overlaid faces suggest a great deal but deliver an ambiguous message.

The sense of mystery behind resonant titles is redoubled in Yanique Norman’s spectacular mixed-media works on paper (acrylic, gouache, matte medium, photocopy and collage for the most part). A search for the combination of words in Quashie Silences: Jade Pinkgill Reverbs #1 and Quashie Silences: Jade Pinkgill Reverbs #2 turns up no references to anything but the two works of art. Perhaps they peak for themselves, especially in the carnivalesque way they spill off rectangular sheets of paper onto the adjacent wall — much the way Clark’s construction materials break the rectangular space ordinarily allotted to drawings. There is clearly a meditation on the contemporary African American condition that could be extracted from a deeper study of this exhibition.

To paraphrase, Norman says her works incorporate inconspicuously found ethnographic and openly racist images that she neutralizes by treating them as (in her words) “fantastical fungus specimens” parallel to the Jade Pinkgill fungus.

“Quashie” refers to African American scholar Kevin Quashie, known for his “black quietude” theory, which challenges the double-consciousness claims of Du Bois. Quashie’s book The Sovereignty of Quiet: Beyond Resistance in Black Culture argues for a nuanced view of African American inner life and yields a complexity similar to that found in Norman’s visual aesthetic.

The work in Recent Drawings provides haunting visual clues and formal links that bring it full circle to its point of origin. That in itself is something worth exploring.