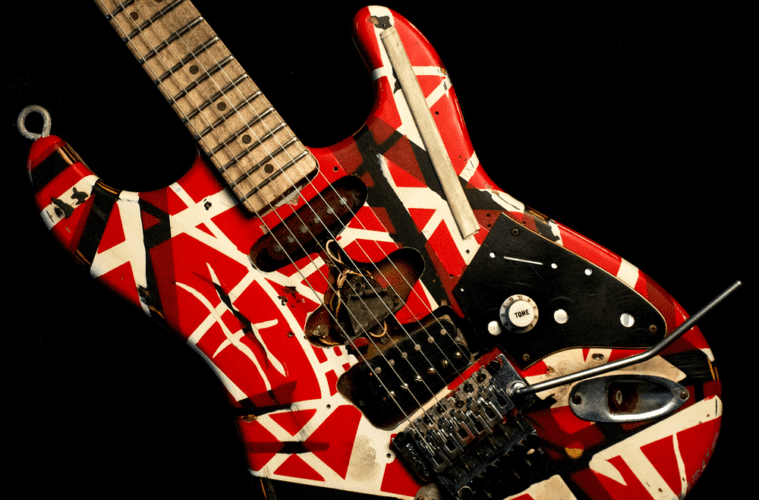 The Eddie Van Halen-designed Frankenstrat electric guitar is one of more than 10 on display in MODA's Wire & Wood exhibition through September 29. (Courtesy of the museum)

From the Artist’s Collection, MINT’s first-ever invitational exhibit and sale, will run through August 31 and include work from Caleb Jamel Brown, Jessica Caldas, Shanequa Gay, Charmaine Minniefield, Marryam Moma and Karen Tauches, among others. Influence will feature Amanda Grae Platner and Hasani Sahlehe, who will make art by taking turns creating and influencing each other without planning or speaking.

MINT, at 680 Murphy Avenue SW, dates to 2006, when undergraduate college students created a space for emerging artists and patrons to find their voices. Spelman College President Mary Schmidt Campbell has joined the board of trustees at the J. Paul Getty Trust in Los Angeles. The trust is a cultural and philanthropic institution dedicated to presenting, conserving and interpreting the world’s artistic legacy. Its components include the Getty Museum (European and American art from medieval times to the present) and the Getty Villa (7,000 years of ancient art, from the end of the Stone Age to the fall of the Roman Empire).

Campbell, an art historian, joined Spelman in 2015. She spent two decades as dean of New York University’s Tisch School of the Arts, 10 years as executive director of the Studio Museum in Harlem and was New York City’s cultural affairs commissioner for Mayor Ed Koch in the late 1980s.

According to trust president and CEO James Cuno, Campbell’s dedication and her work in developing the Getty’s African American Art History Initiative earned her a spot.

Atlanta has become one of the first U.S. cities to join the worldwide Fair Saturday Movement, a celebration of arts and culture supporting social causes that happens the last Saturday every November, the day after the shopping frenzy that is Black Friday.

According to the Mayor’s Office of Cultural Affairs, 13 local cultural organizations have committed to take part in the 2019 event. Others interested should contact Monica Prothro, Arts in Education Services program manager. Fair Saturday features thousands of artists and cultural organizations and every artistic discipline, amateur and professional.