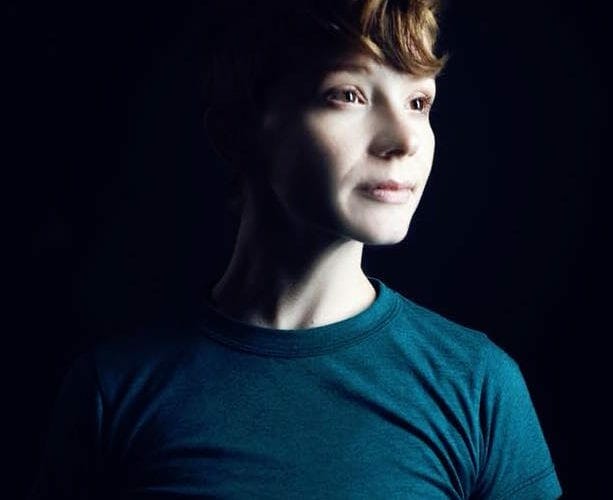 "Courage is knowing it might hurt and doing it anyway," Atlanta intimacy director Ash Anderson says on Facebook. "Stupidity is the same." (Photo by Ashley Earles-Bennett)

20 by 2020: When theater gets intimate, Ash Anderson keeps it safe

Vivian Lee-BoultonJuly 30, 2019
The LatestTheaterTheater - Featured
In the drama Blackbird, the character Una confronts her former lover 15 years after the end of their relationship. She was 12 when she became involved with Ray, who was 40. David Harrower’s 2005 script, staged earlier this month by the new production company Leading Ladies, includes sexual abuse and moments of intimacy. How does an acting company navigate this? They call an intimacy director like Ash Anderson.

If the name is familiar, you may recognize Anderson from stage roles at Actor’s Express (Cardboard Piano), the Alliance Theatre (Alice in Alice Between), Essential Theatre (Ada in Ada and the Memory Engine), Shakespeare Tavern Playhouse (Marc Antony in Julius Caesar) and Synchronicity Theatre (Nancy in Fancy Nancy). The Hero’s Wife at Synchronicity Theatre (with Rebeca Robles and Joe Sykes) is one of four recent projects for intimacy director Ash Anderson. The plot followed a damaged ex-Navy SEAL and his young wife. (Photo by Jerry Siegel)

Anderson, who’s 28 and uses the pronouns they/them, began training in 2018 with Intimacy Directors International, the first organization to codify a standard of practice around intimate scenes. It was cofounded in 2015 by Alicia Rodis, the intimacy coordinator at HBO and one of Anderson’s mentors.

Intimacy directors are relatively new in theater, film and television, their work made necessary as scripts continue to push the edges of sexual content and violence.

Anderson, one of very few intimacy directors in Atlanta, consulted on Slaying Holofernes (running through August 24 at Essential Theatre), Much Ado About Nothing for the new Wayfarer’s Ensemble (final performance at 9 tonight) and for the spring staging of Synchronicity’s The Hero’s Wife.

You’ll often find Anderson, a five-foot-tall crucible of energy and determination, doing business by phone while driving from one rehearsal to another after a day of teaching theater camp, or networking or fast-tracking a meal. It’s a calling. Intimacy Directors International, which certified Anderson, teaches its student in directing and the areas of consent, sexual harassment, Title IX rules and mental-health first aid. It established Five Pillars — Context, Consent, Communication, Choreography and Closure — to help them ensure a proper standard of care throughout rehearsals and performances.

The first pillar, Context, makes sure intimate scenes further the plot. “It’s just another kind of storytelling,” says Anderson. “You have to decide what you want the scene to say and have that be specific.”

With Blackbird, for example, Anderson began by speaking to the director to gauge his vision for the project, and then worked with each actor to see how the script’s intimate moments could help them build their characters.

Consent begins with rehearsals and includes checking in with every actor’s physical boundaries every day. “An ID is there to establish a safe space for dangerous work,” Anderson says. “It allows bravery to manifest within the rehearsal room, aided by the different methods of consent culture we use.”

Anderson advocates for the actor, director and stage managers as a neutral third party in uncomfortable situations. This is the Communication pillar. “It’s about establishing the way to speak to each other,” Anderson says. “You can pause and say, ‘Can I put my hand here?’ It gives people a voice.”

Anderson’s ability to communicate shines through in rehearsal. As opening night for Blackbird neared, nerves created tension among actors and members of the production team. Anderson slowed everyone down and took time to listen to each artist’s concerns before suggesting a solution. Ash Anderson provided intimacy direction for Blackbird, which had a three-night run earlier this month. (Courtesy of Leading Ladies)

Since Anderson grew up dancing in the small South Georgia town of Sparks (population: 2,016), the Choreography pillar is a natural fit. It gives actors strict and easy-to-follow guidelines, Anderson says. They make sure each actor is comfortable.

For example, some actors prefer specific directions (“Use your index finger to stroke from the top of the shoulder down the arm to the elbow”). Others want “containers” of consent areas (“Everything from shoulder to elbow is OK”) to allow for spontaneity.

Each rehearsal and performance ends with Closure. Anderson’s preference is a double high five and an acknowledgment of good work.

“We as actors learn through all of our career how to put on the mask,” Anderson says, “but who teaches you how to take it off? Especially with high moments of nonverbal communication, closing properly is so important.”

You can tell it’s a passion.

“We’re not just doing a job with intimacy direction,” Anderson says. “We’re also changing a culture. So, on the inside we can’t lead with self-righteousness. We need to lead with love and understanding.”