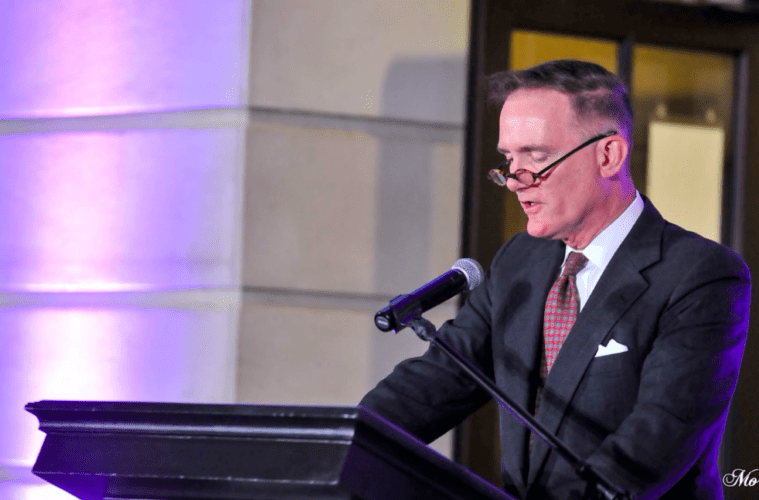 In Our Own Words: Rodney Mims Cook Jr., who leads National Monuments Foundation

Rodney Mims Cook Jr. is the founder and president of the National Monuments Foundation, which designed and built the Millennium Gate Museum at Atlantic Station. As a founding trustee of the Prince of Wales’ Foundation for Architecture, he helped organize the design and construction of the Prince’s Olympic Games Monument in Atlanta. His father, Rodney Mims Cook Sr., was a Republican state representative and Atlanta alderman. (Photo by Bonnie Moret)

My father’s friendship and work with Martin Luther King Jr. and Andrew Young during the civil rights movement led to meetings at our home, all attendees adamant that Atlanta remain peaceful. This was not always the case. My father made a speech in 1962 in the State Capitol rotunda to take down the Peyton Road barrier [in the Cascade Heights neighborhood] that was built to stop Blacks from moving into a White section of Atlanta. “Americans do not wall themselves off from fellow Americans,” he said.

It resulted in death threats and calls to kidnap my sisters and me. I remember being hustled to the third floor of our house and all the lights being turned off the night the KKK showed up. They ignited a cross on our front lawn to intimidate my father. I remember clinging to a rope ladder deployed from a rear window, climbing down and being warned not to drop my 2-year-old sister or she would die. I remember the screaming of police sirens and the Klan dispersing. I was 5 years old and barely spoke for a year after that night. But I found solace in books.

King’s colleague, C.T. Vivian, was sensitive to our situation and took an interest in me. He knew I wasn’t talking, so he cultivated our connection by lending me books from his 8,000-volume library, with books dating to the 18th century. My friendship with C.T. was re-established in adulthood, and he gifted his great library to the National Monuments Foundation, to be housed at Rodney Cook Sr. Peace Park.

I was honored to eulogize C.T. in the same State Capitol rotunda where my father made his speech. During my remembrance, I recalled C.T.’s wisdom that violence disempowers the cause of justice. He believed that yielding to hatred of one’s opponent only serves to intensify the existence of hate. He learned the hard way, in Selma and other battlegrounds, that nonviolent resistance is not a method for cowards. And he was resolute in his conviction that love would always prevail.