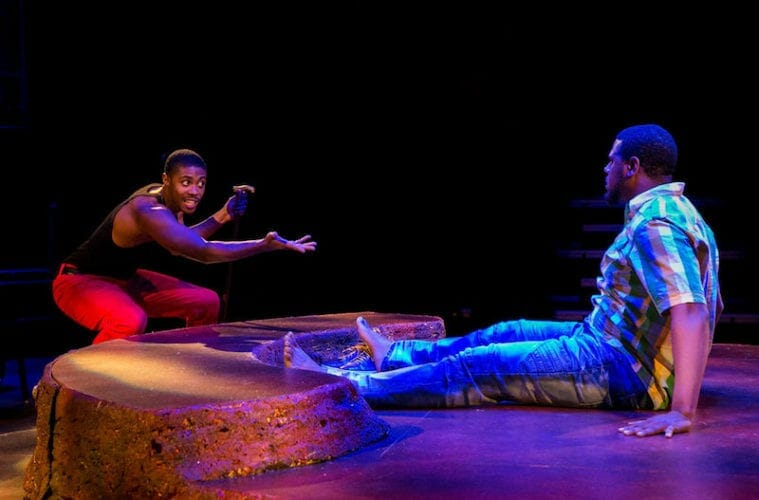 "The Brothers Size" with Ibraheem Farmer (left) and Terrance White was the last fully staged production at Actor's Express, which is now -- like many other companies -- producing virtual theater. (Photo by Casey Gardner Ford) The National New Play Network has granted Actor’s Express and Horizon Theatre producers in residence. Freelance director Amanda Washington is working with the Express and Nicole Palmietto, a director, producer and developer of new plays, is at Horizon.

NNPN is a national alliance of nonprofit theaters that champions the development, production and continued life of new plays. Its producer-in-residence program is designed to revolutionize how theaters support new plays by educating new leaders about collaboration, training early-career producers about successful models and providing connections. In May, Washington earned an M.F.A. in directing from the University of Southern Mississippi. She’s also working on her qualifications to become an intimacy director and choreographer. Washington is the creator of the YouTube Channel Theatre From My View.

Palmietto is the executive artistic director and cofounder of Found Stages, which works to build community through innovative storytelling and often performs outdoors. She has degrees in theater and public relations from the University of Texas at Austin, and is an alumna of Actor’s Express’ directing internship program.

She has worked as a director, assistant director, dramaturg and/or teaching artist with Actor’s Express, the Alliance Theatre, the Atlanta History Center, the Atlanta Musical Theatre Festival, Emory University, Georgia Shakespeare, Horizon, Out of Hand Theater, the Weird Sisters Theatre Project and Working Title Playwrights, among others.

The Coalition for Racial Equity in Atlanta Theatre is accepting applications  for the first round of its Sow & Grow Grants for African American/Black, Indigenous, Asian, Hispanic/Latinx, Middle Eastern, North African and South Asian contributors to metro Atlanta theater. In this round, its first, CREAT will award nine grants — four for $1,500 and five for $800. Sow & Grow Grants are seed investments in theater artists of color. They can be used to develop a project or for personal development, including workshop readings and classes or training. CREAT also encourages applicants to consider using the money for the rest and restorative self-care that feeds creativity.

In a press release, representatives said that although CREAT serves Black and non-Black artists of color, the present moment demands that it “center on Blackness.” More than 70% of first-round funding will go to Black artists. This is the first of at least three grant cycles.

Applications are open until 11:59 p.m. November 20. Grantees will be selected by lottery on November 30 and announced December 1 on a live broadcast. The Sow & Grow application is one-page long and can be completed in less than 10 minutes. Apply HERE.

Synchronicity Theatre has announced four productions for its 2020–21 Stripped Bare arts incubator project. They are gloria and minnie and the castle on the back lot by Dani Herd, Her Last Expedition by Daphne Mintz, I’m a Motherf*#%ing Super Star: So Where Are My Babies? by Valeka J Holt and Emmett + Trayvon + Suns of God by Sonhara Eastman.

Stripped Bare focuses on projects that emphasize words and ideas, and encourages artists to think about the essentials of theater “stripped of” intricate sets, lights, props, sound design and costumes. The focus is on actors, words, passion and ideas. Each project gets up to three days in Synchronicity’s performance space and each participant receives a technician, producer and/or facility manager, house manager and a box-office staffer.

GLORIA AND MINNIE AND THE CASTLE ON THE BACK LOT. Live performance: 7:30 p.m. November 18. Online viewing party: 7:30 p.m. November 25. The story: Welcome to Galactic Studios Theme Park and Resort. When you’re here, you’re a star. Plucky ride attendant Gloria dreams of giving the World Famous Studio Backlot Tour, but whenever she starts to describe Galactic’s contributions to the horror genre, she faints. The play asks: How do you keep moving forward when it seems like your dreams won’t come true?

HER LAST EXPEDITION. Live performance: 7:30 p.m. January 13. Online viewing party: 7:30 p.m. January 20. A psychological thriller and love story set in the isolated Arctic zone, a world where fantasy thrives and dementia beckons. A scientist there spends her life researching the whereabouts of Frankenstein’s monster  as an expression of devotion for her delusional lover. “2 The Left: A Tribute to the Life of Lisa ‘Left Eye’ Lopes” by Kerisse Hutchinson began as a Synchronicity Stripped Bare project. See it virtually through November 8 via Aurora Theatre. (Photo by Terrence Spive

I’M A MOTHERF#%ING SUPER STAR: SO WHERE ARE MY BABIES? Live performance: 7:30 p.m. April 14. Online viewing party: 7:30 p.m. April 21. An ambitious D.C. stage actor with dreams to take over Hollywood and Broadway is finally starting to see success, but her dream of motherhood is tick-tocking away. Who, and what, will she choose?

EMMETT + TRAYVON + SONS OF GOD. This piece delves into Emmett Till and Trayvon Martin’s last moments on Earth, re-examining the pain they endured in becoming synonymous with racial transgressions in America. Neither realizes it, but they both exist in the same space, craving earthly light, longing to be men and never getting the chance.

Performances are free and, with COVID-19’s cooperation, open to a live, socially distanced audience for one night at Synchronicity Theatre, 1545 Peachtree St. N.E. Each will receive one online viewing as well. Reservations required. Call 404.484.8636. Kenny Leon, the cofounder and artistic director emeritus of True Colors Theatre Company, has been nominated for a 2020 Tony Award for his direction of the Charles Fuller drama A Soldier’s Play, a revival that had 58 performances on Broadway before COVID-19 shut it all down.

The 2020 Tony awards, originally scheduled for June 7, 2021, will be held — virtually — sometime later in the year. Broadway theaters, of course, have been dark since mid-March.