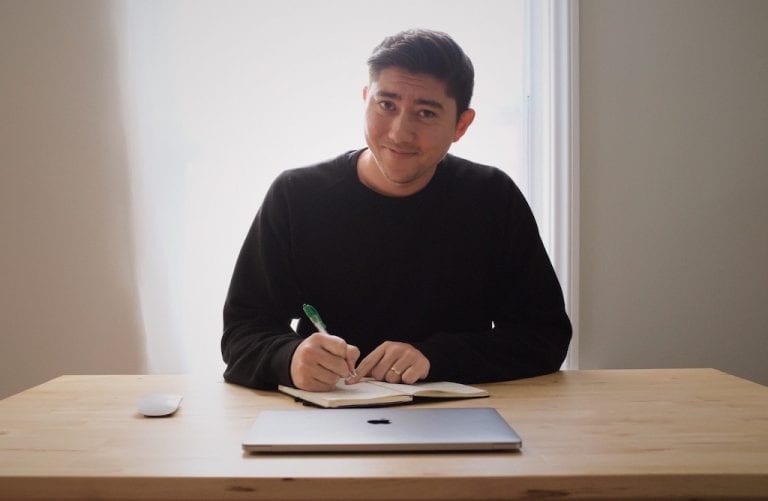 Takashi Doscher is a filmmaker and Georgia native whose work includes documentaries for ESPN and PBS and his latest award-winning feature film, Still. (Photo by Takashi Doscher)

Award-winning filmmaker Takashi Doscher may currently live on the West coast, but the Gwinnett native still considers Georgia his home. His latest project, the feature-length film Still, is set in North Georgia’s Appalachian Mountains and features Madeline Brewer (of The Handmaid’s Tale) as lost hiker Lily. Lily finds herself on the doorstep of a strange Appalachian couple who has decided to take her in. The closer she gets to their lives, the more tangled she becomes in a secret they’ve been hiding for years.

Still is being screened at the Plaza Theater this Friday, January 11, and will run through January 17. It premiered at the Atlanta Film Festival last April to sold-out audiences and earned Doscher a Georgia Film Award.

ARTS ATL: Tell us a bit about yourself and some of the projects we may know you from.

Takashi Doscher: I’m a film and commercial writer and director. I currently live in Los Angeles, but I grew up in Gwinnett County. My previous projects include the ESPN film A Fighting Chance, the PBS documentary Hear U and countless commercial productions, including the most recent tourism campaign for the state of Georgia.

ARTS ATL: There are so many different mediums available to tell a story. What was it about film that appealed to you?

Doscher: I never went to film school. I actually studied physics and English in college. But film always seemed like the perfect medium for me because it combines story and character with technology and science.

ARTS ATL: What films, directors or writers are inspiring you as you continue to grow in your craft?

ARTS ATL: You’ve written or directed promotional spots, documentaries and features on a wide variety of subjects. If there was a common thread that was woven through all your work, what do you think it would be?

Doscher: I feel like this is a question difficult for me to answer about my own work. Maybe someone else will tell me someday! I will say, however, that I try to take a very personal and humanistic approach to every project. Before I begin working on anything, I try to identify an emotional “north star.” How do I want an audience to feel after they have seen the film? What kind of things do I want them to think about or question? What aspect of the human experience am I trying to convey? I am certainly not always successful, but with every project I am trying to invoke authentic human emotion.

ARTS ATL: Let’s get into your film, Still, being released here in Atlanta this week. It’s about a female traveler who ends up on the doorstep of a strange couple in Appalachia, who seem to be from another time. Can you tell us how the project came to be and what made its story so compelling to you to tell?

Doscher: The initial inspiration for this film came as I was about to propose to my wife. For really the first time, I was forced to think about things in a much longer time frame, not just about the next day or month or year, but for the rest of our lives. Making a vow to another person is an incredibly beautiful and powerful gesture, but I’m not sure we often consider what it really means — the depth and seriousness of the promise, the length of time we are committing. As it stands now, as human beings, we have 90 or 100 years on this Earth, if we’re lucky. But what would happen if that time increased dramatically? If we lived for 200 years, 300 or 500? How would our views on vows and marriage and monogamy, even sexuality, start to change? I should say that I am very happily married, but these were some of the initial thoughts and questions that inspired the film.

ARTS ATL: Still is a very Georgia-centric film. It was made here. It’s set in Georgia, and it features local Georgia talent. What about the state made it the best backdrop for the story, both in terms of location and talent?

Doscher: The answer to this question is both sentimental and practical. Growing up in Georgia, I have fond memories of driving up to the North Georgia mountains to go camping and hiking. Appalachia has always held a beautiful yet haunting presence in my mind. Despite all of the modern development, the region still holds a sense of mystery. It continues to draw from its rich history in folklore and the supernatural. It’s easy to be inspired here.

When I moved to LA about four years ago, I always knew that I wanted to come back to Georgia to make movies.  As we all know, the state has transformed its filming infrastructure, continued to attract and grow very talented crew members, but most importantly, it hasn’t lost its sense of community. I wanted and needed to make my first narrative film with the people I’ve worked with for years, people I trusted and who believed in me. Because of the state’s commitment to this industry, I also got the opportunity to work with a new generation of talent, people who I have already worked with a second or third time since we wrapped Still. For so many reasons, this project would simply not exist if we tried to make it anywhere else.

ARTS ATL: Can you talk a bit about the film and your partnership with the Georgia Film Academy? What does that partnership entail?

Doscher: The Georgia Film Academy is a collaborative effort of the University System of Georgia and Technical College System of Georgia. They educate and train people looking to work in the film industry in Georgia. For a production like ours, in exchange for some of their equipment and resources, we brought 13 of their students onto our set to work as production assistants. Partnering with both the GFA and Columbus State University was one of the best decisions we ever made. Not only did our production benefit greatly from their resources, but the PAs became invaluable members of our crew. There was something really magical about seeing each student, who had never worked on a professional set before, lean in and embrace the experience. It was also tremendously rewarding to see our department heads and industry professionals take the students under their mentorship. We were able to capture a bit of lightning in a bottle.

ARTS ATL: What do you hope people take away from Still’s story?

Doscher: I think the story of the making of the film is just as important as the story of the film. I feel like the larger film industry gets a lot of press for its tremendous economic impact. This is an incredible thing, but I also hope our film shines a light on the indie film scene in Georgia. Unique stories by diverse filmmakers need to be told, and Georgia is an incredible place for that to happen. I hope our film will continue to encourage more Georgia-based investors to take some chances on independent filmmakers here in town.

ARTS ATL: What can we look forward to from you in the future in terms of your work?