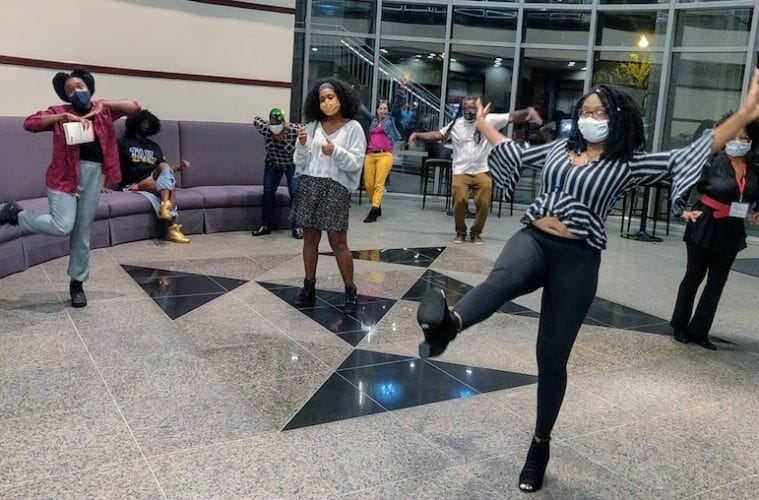 How do you solve a problem like COVID? With patience, connection, theater folk say

Sometimes the show must not go on. For Rachel May, artistic director of Synchronicity Theatre, that’s one central teaching from 2020 — and it’s no easy feat. For Atlanta’s performing arts community at large, that means undoing the tried-and-true muscle memory of hard work and perseverance in the face of adversity — of performing Shakespeare, for instance, with a 104-degree fever. Instead, surviving COVID-19 means staying home even if you’re just sniffling. It means keeping understudies, who’d typically shadow a leading actor’s every move in close proximity, as far away from that actor as possible.

“Everything is harder. Everything takes a lot more time,” May says. “You need to have a plan A, B, C, D, E and F and be ready and comfortable with shifting. Flexibility, patience and communication are essential.”

Managing director Alex Scollon remembers devising eight-week and 12-week plans for Actor’s Express early in the pandemic — just in case. “I remember thinking, ‘There’s no way it’ll go longer than 16 weeks,” he says, laughing. “Trying to think about what will happen is a bit of a fool’s errand at this point. But it means we’ve gotten more adaptive, which is kind of fun. Terrifying, but fun.”

Weekly meetings of the minds

In almost 10 months of uncertainty and constantly shifting realities, Atlanta’s artists and creative leaders have been learning how to rethink their budgets, seasons, rehearsal and audition processes, use of technology, communication with patrons and how to build camaraderie. They’ve also been leaning on one another, trading tips and funding applications and, if nothing else, commiserating. “You can’t just take what you do onstage and put it on-screen,” says Lara Smith of Dad’s Garage.

These exchanges have taken place in varied formats — from the well-established (the 5-year-old, Arthur Blank Foundation’s Audience Building Roundtable) to the decidedly more spontaneous and casual where anyone might drop in. Those are now more possible than ever because Zoom links don’t require travel.

In April, managing director Lara Smith at Dad’s Garage Theatre Company, surveyed more than 55 arts nonprofits and compiled data with the Atlanta Regional Commission about potential economic impacts from COVID-19. She says she saw an early opening for this kind of exchange and decided to launch a weekly meeting of the minds with her colleagues.

Initially, these calls were meant to discuss reopening, but as the pandemic wore on, it morphed and began covering a variety of topics, sometimes just “How are you coping?”

“I’ve been so grateful for how people are checking on each other, says actor–director Tinashe Kajese-Bolden, an artistic directing fellow at the Alliance Theatre. “We’re not waiting to do a show together to catch up. Mothers who are actors, Black directors, women writers, any group you want to check in with, trust me, they’ve got a group for that.”

Synchronicity’s May has been impressed by how much information colleagues have been willing to share about grants, especially since there’s a finite amount of money to go around. “Everyone is generous,” she says. “People aren’t like, ‘Hey, if you apply for this, I might not get it.’”

The upside of COVID-19, sort of

One “benefit” of Zoom is how home lives have seeped into work lives. “Zoom is a surprisingly personal way of meeting with people,” says Angela Harris, executive artistic director of Dance Canvas. “You get to see their kids run into the screen. You get to see their dogs. It makes for a stronger connection.”

If there’s a silver lining to the hardships, it may be that the same limitations on congregating in person have necessitated a constant state of innovation and creative problem-solving. “I’ve recently reflected on the reason my days feel more exhausting,” Smith says. “I think it’s because I don’t ever get a brain break. All my meetings are at my house.”

Synchronicity, which planned to end its 2020-21 season with an adaptation of the Toni Morrison novel The Bluest Eye, is holding a series of discussions and events called Toni Talks in partnership with Alpha Kappa Alpha sorority (Morrison was a member). A soft launch of the talks in October drew 80 people, May says. The Bluest Eye is now penciled in for next summer.

In addition, theaters are using guidelines developed last summer through a collaboration between Emory University’s Nell Hodgson Woodruff School of Nursing and 18 performing arts organizations, an initiative that the Express’ Scollon and wife Helen Baker, an assistant professor at the Woodruff School, envisioned and led.

And, for the first time ever, Atlanta Contemporary Art Center’s outdoor courtyard became the stage for Dance Canvas, which did limited-capacity (30 people max) performances of solo and duets.

One collaboration, it seems, begets the next. Georgia Tech professor Francesco Fedele and Dance Canvas choreographer–dancer Thulani Vereen met at that show. They’re now working on a dance film that explores the symbiotic relationship between science and art. It’s scheduled for release in early 2021. Another uniting factor: the reality that each theater company has been plunged into the filmmaking world. Even on the small screen that requires many new skills.

Dad’s Garage has done more than 770 hours of Twitch.tv programming, Smith says. That means an average of 26 hours per week of new video content. Now that the Dad’s team has streaming experience, it plans to focus more on quality than quantity.

“What we’ve learned is that you have to get to the core of who you are to serve a digital audience,” Smith says. “You can’t just take what you do onstage and put it on-screen if you’re going to have an engaged audience for nine months. That was working at the beginning of the pandemic, and it’s not now.”

Kajese-Bolden has done film and theater throughout her career (look for her in 2021’s sequel to 2016’s Suicide Squad). Those industries often run on separate tracks. Kajese-Bolden says her film experience came in handy with the Alliance’s  A Very Terry Christmas, which was shot in two weeks at locations throughout the city.

The shift online, however, has had Atlanta theaters competing with world-famous companies such as the Royal National Theatre in London. It recently launched an on-demand streaming platform that will let anyone watch Coriolanus with Tom Hiddleston or Medea with Helen McCrory and Michaela Coel for less than $15 a month.

Still, as Scollon sees it, even with major theaters accessible at any time from your living room, the streams will never duplicate seeing theater in person. “I cannot go see Hamlet with 300 other people in my living room,” he says. “Having that shared experience is what makes theater survive.”

Streaming does bring live theater to people who may not have had access otherwise, albeit with varying degrees of success.

The age of COVID also has seen a wider embrace of anti-racism work and civic engagements. It began with the murders of Ahmaud Arbury in Georgia in February and George Floyd in Minneapolis in May, among others, prompting an uptick in action from the #BlackLivesMatter movement and its allies. “I’ve been so grateful for how people are checking on each other, says actor-director Tinashe Kajese-Bolden.

Atlanta theater artists seized the moment to again bring attention to what they call stark inequity and marginalization of Black, Indigenous and other people of color by White establishment gatekeepers.

Dance Canvas’ Harris, who’s lived in Atlanta for two decades, says that the resulting discussions were a good start, the operative word being “start.”

“If we’re going to dive into the tough conversations,” she says, “we have to dive in. We can’t sugarcoat things. Otherwise, nothing will change.”

Toward that end, CREAT (the Coalition for Racial Equity in Atlanta Theatre) and BLACT (Black Leaders Advocating Cultural Theatre) became more public and active, Theatrical Outfit helped organize a #BlackLivesMatter march and street protest, Dad’s Garage and the High Museum of Art became early-voting locations, and Out of Hand Theater moved its Equitable Dinners — which include a short theater piece and moderated conversations about race and equity — from dining tables to the virtual world.

“There’s a unique opportunity to broaden our impact on the arts by centering strong foundations for BIPOC artists, and there are many ways we can do it,” Kajese-Bolden says. “This includes cultivating a wider range of stories and keeping the curiosity in seeing the whole person within the community. The curiosity in seeing the 360 [degrees] of the Black experience, the 360 of Indigenous experience, the 360 of the essential worker. That we are not just focusing on exploiting the pain but also telling the joy.”