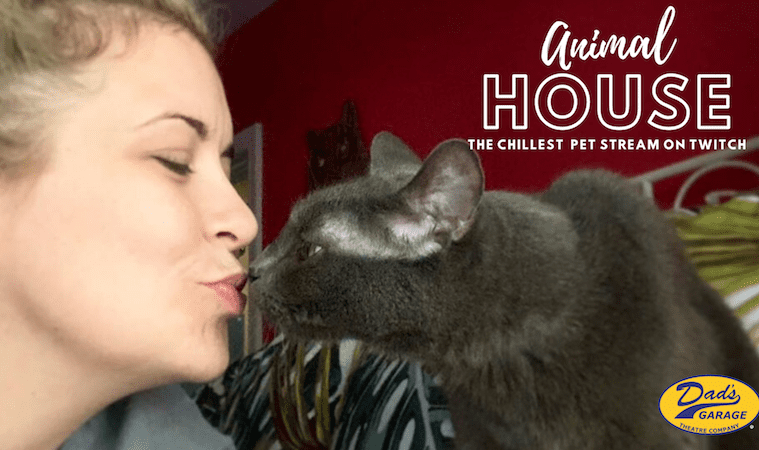 On "Animal House With Whittney," Whittney Millsap narrates the daily dramas of her cat-and-dog family. It's one of a growing list of streaming options on Dad's Garage's Twitch.tv channel. The titles are typical Dad's -- quippy, funny and irreverent.

Dad’s Garage Theatre Company, the self-described “lil chuckle hut” on Ezzard Street, is doing what it does best: thinking on its feet. As artistic director Jon Carr puts it: “Fundamentally, we’re an improv theater, so we’re going to be flexible and ‘yes and’ every situation.”

This quick pivot to embrace a new normal around the coronavirus pandemic includes the theater’s launch of the Social Distancing Spectacular, shifting its Big Stupid Parking Lot Carnival fundraiser to a Big Stupid Silent Auction & Fundraiser, and establishing a new streaming channel on Twitch.tv. (Bidding on auction items begins Wednesday, March 25. Go HERE to donate to Dad’s, contribute to the auction or buy a gift card.) Carr, who became artistic director less than four months ago (although he’s been a Dad’s performer and administrator for years), says that he and others on the team saw an opportunity to try other performance mediums, something they’d been contemplating but hadn’t tested amid a calendar chockablock with shows, corporate training sessions and classes.

What better time to experiment?

So Dad’s launched its Twitch.tv channel on March 16, with such shows as Quarantine Cooking With Meg, Animal House With Whittney, Lunch Time With Lucky, Songs With Hobbsy and Drunk Aunt With Gina Rickicki, among others.

Meg Ansteensen hosts Quarantine Cooking “because the stores are empty right now like our souls.” On Animal House, Whittney Millsap narrates the daily dramas of her cats and dogs. On Lunch Time, Lucky Yates — an original Dad’s performer — offers a midday attitude adjustment. And on Drunk Aunt, longtime actor/improviser Gina Rickicki shares “all the advice you never knew you needed.”

Other ideas are still percolating — shows with parkour and stunts, for example, musical improvisation, makeup tutorials, and a version of Dungeons and Dragons. Dad’s Garage is also streaming scripted shows, like “The Wrath of Con” and “Wicket: A Parody Musical.’

Dad’s also is using Twitch to broadcast recordings of previous scripted shows, like Wrath of Con and Wicket: A Parody Musical, giving second life to videos that Carr says were conceived solely for archival purposes. (Wicket, from 2018, streams at 8 p.m. Saturday, March 28.) Perhaps most importantly, viewers can donate during programs or via the Dad’s website, with half the funds raised going to the artists themselves. In its first week, Dad’s Twitch platform raised almost $1,500.

“The way we’re working is kind of a Wild West situation,” Carr says. “So if you have an idea for something, we’ll go for it. It’s a trial by fire. At the end of it, I think the theater and the staff are going to have confidence that we can adapt. I’m excited about a new challenge, where we’ll have to learn and grow.”

Associate artistic director Matt Horgan is hosting a Twitch show titled Horgan Goes Bananas, which, he says, he’s inventing as he goes. For his March 18 premiere, he tapped the wild world of public domain videos, settling on a black-and-white silent film of Zorro to screen while offering commentary. “This is some of the thrilling action you can’t get on Netflix,” he quips, as the masked hero untethers his sword and chain-smokes.

At 2 p.m. Wednesday, March 25, Horgan will pay tribute to what he calls the “best and most-forgotten buddy-cop movie ever,” 1986’s Running Scared, with Billy Crystal and Gregory Hines. Associate artistic director Matt Horgan (right, minus mask) chuckles at the antics of Douglas Fairbanks in a silent-era “Zorro.” Horgan came up with “Horgan Goes Bananas” when he began running out of things to watch while self-quarantining.

“We don’t need to pack the shows with lots of jokes about coronavirus,” Horgan says. “What we’re offering is escapist entertainment. If I have a ridiculous idea, I’ll just explore that, have a lot of fun with it, and share the joy.”

The show schedule is regularly updated to keep pace with additions and lineup changes. If you can’t tune in live, don’t worry. Previously aired shows remain in the video library for you to watch at your leisure.

In terms of monetizing, it’s a start, says managing director Lara Smith. Dad’s is in a good place, she says, having received an operating reserve grant of $100,000 from the Community Foundation for Greater Atlanta two years ago. The company operates with a budget of about $1.9 million, more than True Colors Theatre Company, Horizon Theatre and Actor’s Express, all with budgets ranging from $1.2 million to $1.5 million. The Alliance Theatre, by comparison, operates on an annual budget of $16 million.

Dad’s did extensive strategizing in 2018 around possible operations crises, too. Still, the worst-case scenario then looked like a major roof repair, not a pandemic.

What’s clear is that the audience is definitely still there, looking for ways to keep laughing. As of March 24, the Dad’s Twitch channel was gaining traction, having accrued 710 follows, with an average of 300 people watching the stream at any one time.

“Arts comforts and informs people, brings smiles to people,” Carr says. By supporting arts organizations now, people are “investing in the light at the end of the tunnel. That’s an important way to remember that this won’t be forever.”