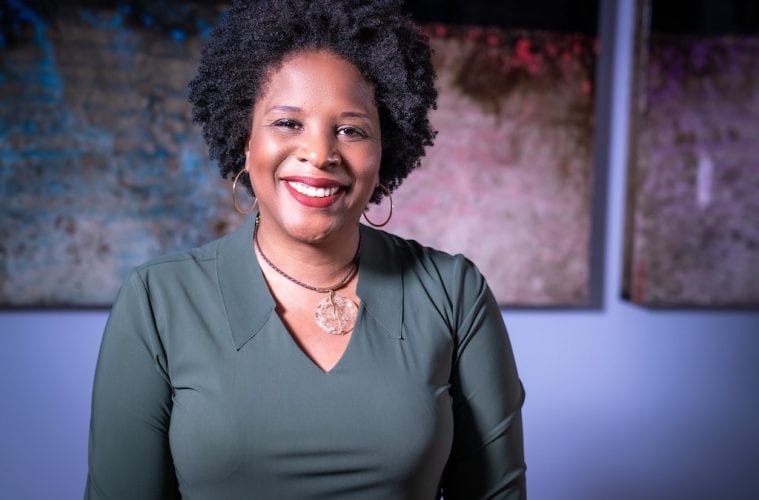 Tayari Jones was researching race, incarceration and the criminal justice system during a fellowship at Harvard’s Radcliffe Institute when the idea first struck for her fourth novel, An American Marriage. But it wasn’t until she overheard a couple talking at Lenox Mall that the story’s main characters came into focus.

An American Marriage tells the story of Roy and Celestial Hamilton, newlyweds whose happy marriage gets torn apart when Roy is falsely accused of a horrific crime. Jones fashioned Roy as a kind of modern-day Odysseus, traveling a long and difficult journey, overcoming huge obstacles to get back home to his wife.

Jones’ exploration of this journey, of the true toll of presuming a man’s guilt, resonated with famous bookworms like Oprah Winfrey, who selected the title as her first book club pick of 2018, and former President Barack Obama, who added the book to his summer reading list five months later.

Jones’ own journey as a storyteller began with Pearl Cleage, her first teacher at Spelman College in 1987. In Cleage, a 16-year-old Jones found a mentor who modeled a writing life and showed commitment to her community that Jones could work to emulate. Jones attended salons in Cleage’s home called Live at Club Zebra, where artists cross-pollinated over ideas, dance, music and poetry.

“This was before Pearl was an internationally known playwright,” says Jones. “I was just a kiddo sitting there [with] all these eccentric, brilliant people who were making art in public. I didn’t know who was who at the time, and if Pearl told you the names of the people [in attendance], the fact that I was in their company as a little whippersnapper would be stunning. But I knew what I was seeing and that I wanted to live this expressive, creative life that she and her friends in the creative community demonstrated.”

After graduating from Spelman, Jones completed her master’s degree in English at the University of Iowa. The homogeneity of Iowa’s student body and course syllabi triggered a culture shock that not only left her feeling marginalized but craving intellectual and emotional stimulation that was more representative of a wider world.

Jones also studied at Arizona State University. Later, she moved to New York, where she would go on to become an associate professor in the MFA program at Rutgers University in Newark. She laughs remembering a shopkeeper’s horror at being called “Ma’am” and at the reactions of Gothamites who acted like she’d made her way to Brooklyn via the Underground Railroad. Those lost-in-translation moments were well worth the opportunity to be near the center of publishing, though, where she could give her writing career a chance.

Jones debuted as a novelist with the coming-of-age fiction Leaving Atlanta in 2003. The Untelling, a novel about the unraveling of family secrets, followed in 2006. Her third book, Silver Sparrow, was named the #1 Indie Next Pick by the American Booksellers Association in June 2011, and five years later, was reintroduced to audiences as a National Endowment of the Arts Big Read.

An American Marriage was published on February 6, 2018, and the subsequent whirlwind book tour and speaking engagements it kick-started took Jones on a road trip that even Homer’s Odysseus would have had trouble imagining.

“It has been thrilling, exhausting and in many ways such a dream-come-true,” says Jones of the book’s success and acclaim. “It’s hard to explain. Is there a way you can be so tired and so wide awake at the same time?”

Writing the book also reawakened in Jones her deep love for the city that made her.

“I’ve written four novels about Atlanta,” she says. “But even before the publication of An American Marriage and the response that followed, when I turned this book in, it became really clear to me that it was time to move back home. I think it made me miss Atlanta and realize that when I’m here, in real life or in my imagination, I’m most myself.” Jones graduated from Mays High School in Atlanta before going on to earn degrees from Spelman College, the University of Iowa and Arizona State University. (Photo by Mack Jones)

And who exactly is she?

Well, for one, Jones is a self-avowed analog person. She loves pencils and pencil sharpeners. She believes in landlines and uses a rotary phone at home. When traveling, she stays connected to loved ones by hand-writing notes and letters with a fountain pen. She geeks out over stamps, and her voice actually lowers to a conspiratorial pitch when asking with not a single trace of irony, “Don’t you love that awesome eclipse stamp the post office released last year that changes color when you press on it with your thumb?”

She can tolerate e-readers when absolutely necessary, but give her a hardbound book and a place to curl up on her front porch, and she’s in heaven. She takes her New Yorker magazine the old-fashioned way, routinely underlining favorite passages with a pen. And whether it’s reading or writing, she insists on taking her time.

“If I’m writing on deadline, I’ll do it on the computer because it’s fast,” she says. “But when writing fiction, I like to get into this slowed down meditative space that [one of my 10 manual typewriters] allows. It’s so much slower than writing on a laptop keyboard. The sound of the typewriter kind of hypnotizes me in a way. And if I type too fast, the keys get tangled.”

Jones joined Emory University’s faculty as a creative writing professor last fall, and she is thrilled to call Atlanta home again after a near-30-year absence.

The homecoming feels most real, she says, when she’s shopping at the Publix on Cascade Road and runs into her fifth grade teacher or when she bites into an apple walnut cobbler at Houston’s.

Another important part of Jones’ homecoming has been bringing the voices of emerging writers to the forefront by encouraging them to write with love about the world they know.

Hers is a career that’s both coming full circle and just beginning.

Now, she says, “Pearl loves to tell people she doesn’t think of me as a mentee anymore but a friend. And I ask, ‘What? Are you kicking me out the nest? What’s happening here? I won’t go!’”

Jones seems to be the last one to realize that she’s not only flying on her own, she’s soaring.