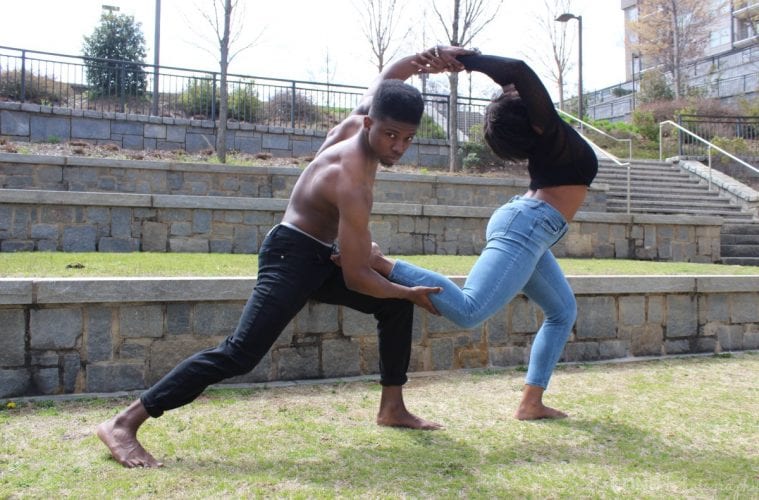 Skid. The production takes a provocative look at Metro Atlanta’s homelessness and gentrification while celebrating the vulnerability and strength of humanity through innovative set design to show the human connection between art and social justice. January 25–26 at 8 p.m. Ferst Center for the Arts.

Body as Resistance: Fueling the Spectator with Power and Motivation. A brunch and dialogue with Israeli artists and choreographers Niv Sheinfeld and Oren Laor will investigate the potential of art to trigger and inspire activism in audiences. January 27 at 1 p.m. 7 Stages.

Perspectives: A Group Exhibition. A collection of original works by 32 artists from the Women’s Caucus for Art of Georgia, including paintings, photography, glass and other art forms. Opens January 24 at 5 p.m. Through March 17. DTG2 at Cornerstone Bank of Decatur. Am I Enough: The Representation of Black Women in Global Popular Culture artist talk will be held January 24. (Courtesy of Gallery 72)

I Am Both. A two-person exhibition of mixed-media textile pieces and sculptural works made by Georgia-based artists Sonya Yong James and Trevor Reese. Through March 9. Chastain Arts Center.

Am I Enough: The Representation of Black Women in Global Popular Culture artist talk. Hosted by Yema Thomas of The Atlanta Ginga Project, the panel discussion will explore the ongoing struggles of Africans and African descendant women for aesthetic and cultural equity in a world still fueled by the myths of black pathology. January 24 at 7 p.m. Gallery 72.

A Star is Born. Jackson Maine, a country music star on the brink of decline, discovers a talented unknown named Ally, and the two begin a love affair. But when one becomes more famous than the other, their relationship turns troublesome. January 21–24. Plaza Theatre. Nelson Patton is the experimental duo of Dave Nelson and Marlon Patton. (Courtesy of Nelson Patton)

Jon Mueller with Poèmes Électroniques. Percussionist and drummer Jon Mueller presents his uncommon technique, rigor and virtuosity for which he is celebrated. Topping off the evening is an immersive electronic performance inspired by “Poème Électronique,” a piece by Le Corbusier, E. Varèse and Xenakis. January 22 at 8 p.m. The Bakery Atlanta.

Catalyst Arts Atlanta presents K2. An immersive experience in which guests are guided through a snow-covered base camp complete with sherpa tea. Opens January 25 at 8 p.m. Through February 9. The Bakery.

Roshani Chokshi: The Gilded Wolves. The author discusses and signs copies of her latest book. January 22 at 6:30 p.m. Little Shop of Stories.

Writing Memoir: How To See the Forest Through the Trees. Dr. Kerry Neville hosts a workshop on how to expand a brief, concentrated short moment into a longer nonfiction narrative. January 26 at noon. Elevator Factory.

Moonlight and Magnolias. This show offers an inside look at the men behind the writing of Gone With the Wind. Ultimately, the group locks itself in an office with five days’ worth of peanuts and bananas. Through January 27. Georgia Ensemble Theatre. Deborah Dancy: The Edge of Time. The artist presents her oil works on canvas, which embrace the natural ambiguity of abstraction. Through February 2. Marcia Wood Gallery. A Doll’s House, part 2 takes an unexpected twist on the original play by Henrik Ibsen. (Courtesy of Aurora Theatre)

A Doll’s House, Part 2. Based on the classic play by Henrik Ibsen, the coproduction between Aurora Theatre and Actor’s Express takes the story in an unexpected direction. Nora, who left her husband and family to become a successful author, returns 15 years later to her old home to ask her husband for a divorce. Through February 10. Aurora Theatre.

January Group Exhibition at Mason Fine Art. A variety of artists present works including a juried exhibition by artists from the Goat Farm, a selection of work by Atlanta artists and a special exhibition titled Between the Deep Blue Sea and the Universe by metal artist Corrina Sephora Mensoff. Through February 16. Mason Fine Art.

Human Trafficking: The Battle Continues. The exhibition features more than 20 artists who use their craft and skill to display works that bring awareness to the issue of human trafficking. Through March 12. The Shambhala Center of Atlanta.

Fernando Gaspar: Floating Machines. Composed of 15 paintings, the exhibition advances the artist’s interest in the ancestral biologics within and between a primeval earth and sky while giving a nod to his Southern European mannerisms. Through mid-March. Bill Lowe Gallery. Dandy Lion: (Re) Articulating Black Masculine Identity, which shows fashion as a form of resistance, is on view through April 28. (Courtesy of Hammonds House Museum)

Run! Jump! Fly! Adventures in Action. Families are invited to participate in activities designed to teach youth to maintain happy and healthy bodies. Activities include kung fu, surfing, snowboarding and yoga to build strength, coordination, balance and endurance. Through May 27. Children’s Museum of Atlanta.