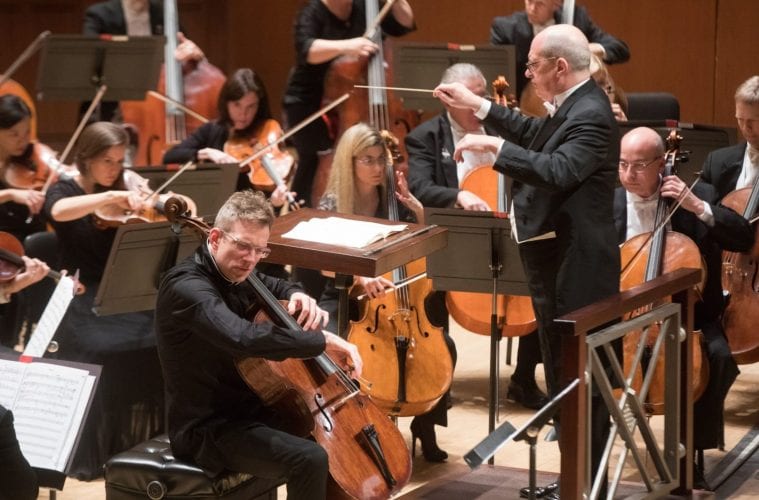 ASO performs a powerful concert of music by Bernstein and Shostakovich

Emotionally powerful music by Leonard Bernstein and Dmitri Shostakovich marked Thursday night’s performance at Symphony Hall by the Atlanta Symphony Orchestra, led by music director Robert Spano, with cellist Johannes Moser as the evening’s guest soloist. The program will be repeated on Saturday.

In contrast to the previous week’s more popular Bernstein-fest, which presented a flavorful balance of seriousness and entertainment, last night’s concert opened with a more intensive work by the composer, titled “Three Meditations from Mass.” The composition was drawn from the 1971 stage work Mass: A Theatre Piece for Singers, Players and Dancers, a setting of the Latin Mass with additional English tropes by Stephen Schwartz and the composer himself.

Moser, who is now Oregon Symphony’s artist-in-residence, performed as the cello soloist in the evening’s performance of the “Three Meditations.” The work is not the kind of music recommended for evoking a sense of relaxation. On the contrary, the compositions are deeply emotional forays into the human spirit, and the music is often laden with anxiety and a sense of inner conflict and doubt.

This is true in particular for the first two pieces, which were lifted intact from Mass for their transcriptions — the first from between the “Confession” and the “Gloria,” the second from between the “Gloria” and the “Epistle.” Both are tautly crafted and intense in expression. The third, cobbled together from music found in other parts of Mass, is less effective overall but has an attractive multi-meter passage reminiscent of Eastern Mediterranean dance and also includes some thoughtful moments drawn upon the tune of the theater piece’s closing “Almighty Father” chorale.

Moser and Spano were well in sync for this all-too-brief 17 minutes of music, which comprised the first half of the concert prior to intermission. But the real weight of the concert was yet to come. The monumental Symphony No. 7 by Russian composer Dmitri Shostakovich began after the intermission. Nicknamed “Leningrad,” at almost 70 minutes duration, it is the longest of the composer’s 15 symphonies and one of his most revered.

By traditional accounts, Symphony No. 7 represents the Russian resistance to the German invasion of Russia and the destruction of Leningrad in World War II. The symphony quickly became an international wartime symbol in the fight against fascism.

The first movement begins confidently, followed by a “theme of war” that is introduced quietly but builds through a series of variations to a frighteningly savage apex, followed by a threnody for the victims of the war. The second is a lyrical scherzo with a hint of underlying sadness. The slow, emotional and sometimes agitated third movement led without pause into the stirring final movement, which built itself into a triumphal climax of assured victory with a joyful conclusion.

Prior to Thursday night’s concert, a group of ASO musicians and guest colleagues performed a recital of chamber music, for the second time this season — the preconcert recitals continue to prove themselves a valuable extension of the ASO’s diverse creative offerings. The music was dedicated to Evans Mirageas, who stepped down from his position as the ASO’s VP of artistic administration at the end of December.