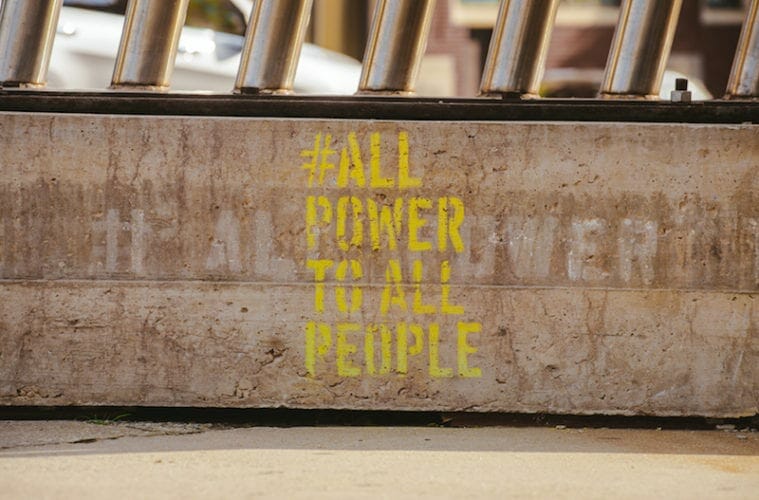 The sculpture, "All Power to All People," is on the Atlanta BeltLine's Eastside Trail through August 13. (Photo by Ryan Purcell)

When Hank Willis Thomas’ 28–foot–tall, 7,000–pound sculpture All Power to All People went up on the Atlanta BeltLine’s Eastside Trail late last month, it invited a broader conversation about who we are, what we value and the role artists play as cultural historians. The touring exhibition — featuring the Afro pick and the Black Power salute — is here through August 12, then moves to Washington, D.C. “I’ve always admired the sculptures of Swedish–American artist Claes Oldenburg, who could take any quotidian object, such as a garden spade or badminton birdie, and monumentalize it,” Willis Thomas wrote in an essay for CNN.com. “In Philadelphia, where my mother is from, [Oldenburg] made a colossal clothespin that sits outside of City Hall. But his sculptures tend to be of Western, American, middle-class iconography.”

Not so for Willis Thomas, whose conceptual mixed–media art has been a 20–year–long exploration of themes related to perspective, identity, systemic racism, popular culture and the commodification of African American athletes. His reimagining of the Afro pick, embellished with a raised fist and peace sign, symbolizes unity, pride and a self–love that speaks to African Americans. His choice to elevate an emblem of 1960s counterculture and raised consciousness feels prescient as monuments to Confederate leaders and slaveholders are being toppled, beheaded and slam-dunked from Richmond, Virginia, to Boston to Bristol, England.

“It feels like déjà vu,” says Camille Russell Love, executive director of the Mayor’s Office of Cultural Affairs, who collaborated with sponsor Kindred Arts to find a spot for the site–specific piece (and rocked an epic Afro herself back in the day). “I distinctly remember the night John Carlos and Tommie Smith raised their fists at the Summer Olympics in Mexico City. Over 50 years later, the same thing is happening with Colin Kaepernick, the #BlackLivesMatter movement and protesters around the world as young people are forcing the world to deal with persistent racism.”

Willis Thomas — whose mixed–media works have been exhibited at New York’s International Center of Photography, the Guggenheim in Bilbao, Spain, and Paris’ Musée du quai Branly — comes from a long line of agitators and good–trouble makers whom he credits for insisting that he think critically and creatively. Deborah Willis, his mother, is an award-winning photographer, curator, historian, author and educator. Her 12-year tenure at the Schomburg Center for Research in Black Culture at the New York Public Library left an indelible impression on her son, who says, “There was never a time I didn’t know that Black people were beautiful, brilliant and had done incredible things.” His father and namesake, Hank Thomas Sr., was a Freedom Rider, Black Panther, musician, scientist and visual artist. And Ruth Willis, his 98–year–old maternal grandmother, still exemplifies her conviction “that love overrules and nothing can take away the integrity in our heart when we have faith.” The 28-foot-tall sculpture “All Power to All People” depicts an Afro pick, the Black Power salute and peace signs. (Photo by Ryan Purcell)

Willis Thomas, 44, learned from his mother’s photography work that we each have a responsibility to bear witness and share what we’ve learned, he says. His output indicates that her lesson continues to resonate.

Incarceration Nations: Writing on the Wall, his recent public–art collaboration with academic, cultural critic and activist Baz Dreisinger, centered prisoners’ fears of Covid-19 contamination by projecting their quotes onto criminal justice buildings in lower Manhattan. For Freedoms, the nonprofit Super PAC he co-founded, is an ongoing nationwide billboard–art initiative intended to provoke debate around voting and encourage voter registration. (Its name was inspired by the Norman Rockwell series in 1943.) His Raise Up sculpture was curated by Bryan Stevenson, founder of the Equal Justice Initiative, for the National Memorial for Peace and Justice in Montgomery, Alabama.

Raise Up mirrors an iconic black–and–white photo from South African photographer Ernest Cole’s 1967 book House of Bondage. Cole (1940—1990) exposed the horrors of apartheid by taking clandestine photographs in the late 1960s and smuggling them out of the country. One striking image shows a row of nude male miners facing a wall with their backs to the camera and arms held high in preparation for the daily strip search. “I always felt that [by] looking at their exposed bodies I was somehow gawking, or reinforcing the trauma or pain of exploitation of their bodies,” Willis Thomas says. “So I chose to crop my sculpture at the shoulders.” The “Raise Up” sculpture is at the National Memorial for Peace and Justice in Montgomery, Alabama. (Courtesy of the artist)

In doing so, the artist turned a moment of humiliation into one that reflects the motion of people rising for air after being baptized in a large body of water. Five months later, on August 9, 2014, it took on a different meaning. That was the day that 18–year-old Michael Brown was shot and killed by a police officer in Ferguson, Missouri, giving rise to the chant “HANDS UP, DON’T SHOOT.”

Willis Thomas says he feels a responsibility to live up to the legacies of such moral leaders as Congressman John Lewis and author/minister/civil rights activist C.T. Vivian by using art as a catalyst for civic dialogue. And he’s fueled by responses to his call for action.

“I’m super-excited to have my work in Atlanta, the shining city upon a hill,” he says. “People are in awe, inspired, enthusiastic, eager and proud of All Power to All People. Seeing how necessary, important and impactful this work is has been incredibly humbling, and I look forward to seeing what other work it inspires.”

The sculpture will be on exhibit in Washington, D.C. (August 15–28), to coincide with the Commitment March: Get Your Knee Off Our Necks on August 28 and to mark the 57th anniversary of the Rev. Martin Luther King Jr.’s “I Have a Dream” speech.