Pulitzer Prize-winning journalist and Emory University professor Hank Klibanoff explores the mysteries and injustices behind unsolved Civil Rights cold case murders in his new podcast, Buried Truths, with new episodes now airing each Monday. ARTS ATL’s Gail O’Neill visited Klibanoff during the recording process at WABE studios to talk about the sociopolitical climate in the South in 1948, the suppression of the black vote and his incessant curiosity surrounding a handful of Georgians who’d decided they’d had enough of a system that was rigged.

ARTS ATL: What was the genesis of Buried Truths?

Hank Klibanoff: The six part series and bonus episode is based on a course I teach at Emory called The Georgia Civil Rights Cold Cases Project. Season one of Buried Truths opens with the all-white Democratic primary [primary elections in the South in which only white voters were allowed to participate, in defiance of a 1944 Supreme Court ruling] in Georgia in 1946. When blacks won the right to vote in the Democratic Party’s primary elections, the NAACP began having meetings in Georgia to enlist more people and instruct them on how to register to vote. Isaiah Nixon was one of 84 men [most of whom were farmers or sharecroppers] who joined the effort and put it all on the line. He cast his vote in the race for governor between Herman Talmadge and Melvin Thompson in 1948. The consequence was an ugly, awful and, ultimately, fatal day.

ARTS ATL: What do you want listeners to know about Isaiah Nixon? 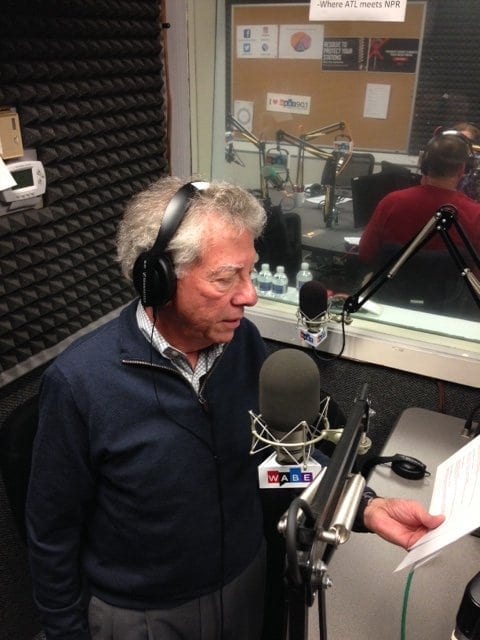 Klibanoff: Isaiah was a 28-year-old father of six who lived on a 59-acre farm in the rural town of Alston, Georgia. Most of his income was from farming a wide range of crops and the sale of turpentine [tapped from his pine trees]. Audiences will hear, very powerfully and poignantly, from his daughter, Dorothy Nixon Williams, who was six years old when she and her siblings witnessed their father being shot and killed [by two white men he had known since he was a boy] for exercising his right to vote. When we found Dorothy, I flew her to Atlanta [where] she came to my class and just mesmerized the students for two hours. It was phenomenal. She was our greatest source of information.

ARTS ATL: The series is being billed as a cold case podcast, yet you name the segregationists and Klansmen who stopped at nothing to intimidate black voters. What makes these cases cold in your mind?

Klibanoff: Killers have gone unpunished. Justice was not served. We say we know who did it, when, where and how, but we don’t always know why. As we learn why, we’re going to tell listeners why. And the why isn’t always what was going on in that guy’s head when he did it. The why is what was the context [in which] a white guy could feel like he could just, on his own, show up on a black man’s property after he voted; ask him if he voted; ask him who he voted for; not like the answer; and kill him. We explore why so many white men were acquitted for so many years. We’re going beneath the headline and behind the curtain to explore that.

ARTS ATL: You pull back the curtain on some very, very hard truths about the South in this podcast. Was the task made more difficult by the fact that you are a Southerner by birth, or easier because you know the culture, history and people?

Klibanoff: [Telling the truth] is always made easier by the facts. You cannot look at a certain set of facts, of who we were back in the 1940s, without understanding that we were a certain way and ought not be proud of it. There were some terrible, shameful things that were done . . . and I’m not even talking just about the violence. The violence is awful. You’re not going to find too many people who would disagree with that. But it’s the more insidious violence, in effect, through the court system, the electoral system and all the manipulations that were designed to foster and maintain white supremacy. It’s just as plain as it can be.

ARTS ATL: How far would white supremacists go to preserve their racial dominance in the Jim Crow South?

Klibanoff: There is no doubt that racism existed up north. But it wasn’t a passive thing in the South. You were required to discriminate here. Legislatures went into session with the intent to bolster laws that mandated segregation and discrimination. If you were a principal who wanted to allow a black pupil into your school, you couldn’t. Newspapers could get in trouble if they ran an obituary for a black person — because the DA could come in and invoke some vague law. We all know about the Poll Tax and literacy test where voting was concerned. [The latter] was a fairly common way of keeping poor, uneducated blacks out by requiring them to recite long passages from the Constitution, from memory; or asking applicants how many constitutional offices were in the state of Georgia; or how many governors had there been in the history of the state. Of course, no one could respond correctly, not even the county registrars asking the questions. But they would only [administer literacy tests] to prospective black voters. It was so clearly built as this really tight screen to keep them out.

ARTS ATL: Do you think Americans really know our history? And if the answer is no, can we possibly navigate an intelligent path going forward?

Klibanoff: I don’t think any of us know enough. I don’t know enough, and I grew up in the South. I was about to enter the fifth grade when Brown II, the implementation order of Brown v. the Board of Education, came down. If the Supreme Court had said to the South you must integrate now, I would have had the benefit and privilege of having gone through a diversified school system my entire schooling — from first grade on. But because Alabama resisted for 11 more years, it’s not till I was a junior in high school that we finally did it. And, I might add, 11 bloody years in which a lot of people died. I don’t know how to prove this, but if we had gone forward with the Court’s ruling in 1955, where would we be today? I cannot believe we’d be worse off. I believe we’d be better off.

ARTS ATL: The circus-like atmosphere, fear-based rhetoric and speeches that fomented hatred were hallmarks of Eugene and (his son) Herman Talmadge’s political campaigns, according to Buried Truths. Do you hope listeners will heed the past and have it inform their powers of discernment going forward?

Klibanoff: Absolutely. I have been talking about this for years. I grew up in the South under George Wallace. The one thing that is so clear is the power and the danger of demagoguery . . . political bullies who will pick lesser targets and beat up on them, mercilessly. In this case, it’s [Eugene] Talmadge elevating blacks as a danger, and a threat. He doesn’t have too much difficulty given the prevailing myths about African Americans at that time. He could make any poor white Georgian think, “that black man, hanging back over there near the woods, watching us from afar? He wants your job. He wants your church. He wants your school. He wants your daughter.” You do that long enough and often enough, and people will start to believe it. Flashing forward, demagoguery seems to work. [Governor] Jimmy Davis used it in Louisiana. [Governor] Orval Faubus did it in Arkansas, in spite of being a progressive who knew better . . . [Governor] Ross Barnett did it in Mississippi. And [Governor] George Wallace did it in Alabama. You would think that we, in the South, would be on to that. But it still works politically and it destroys governance.

ARTS ATL: It destroys democracies too.

Klibanoff: Absolutely! Ralph McGill visited Europe in the 1930s and witnessed Hitler’s rise. It scared him to death. When he saw that same kind of demagoguery here, he started writing about it in 1942.

ARTS ATL: Decades later, you followed in McGill’s footsteps as managing editor of the Atlanta Journal-Constitution after a long career as a reporter. You went on to win the 2007 Pulitzer Prize for History for co-authouring The Race Beat: The Press, the Civil Rights Struggle and the Awakening of a Nation and currently direct the journalism program at Emory. What has it been like for a veteran of print media to venture into the world of podcasting?

Klibanoff: I was interested in finding a new platform for sharing these cold cases, but the thought of writing a book didn’t grab me like the idea of doing a podcast. As a journalist, I am always in search of a million holy grails. Podcasting allows me to write in an all new way and have the same impact . . . maybe even more. It’s a different form or journalism, and I just love it!

Klibanoff: You can’t count on visuals to inform the audience of what’s going on when writing for radio. If you’re relying on archival audio recordings of [Eugene] Talmadge giving a speech during a thunderstorm, when he’s running for his fourth term as governor of Georgia in 1946, and the technology of 1946 is lacking, you have to set things up for your listener. You want them to follow the narrative without a whole lot of coaching, but some explanation is required so they won’t get lost. You and I both know that as listeners, it’s a frustration to say, “Wait a second! What’d he just say?” 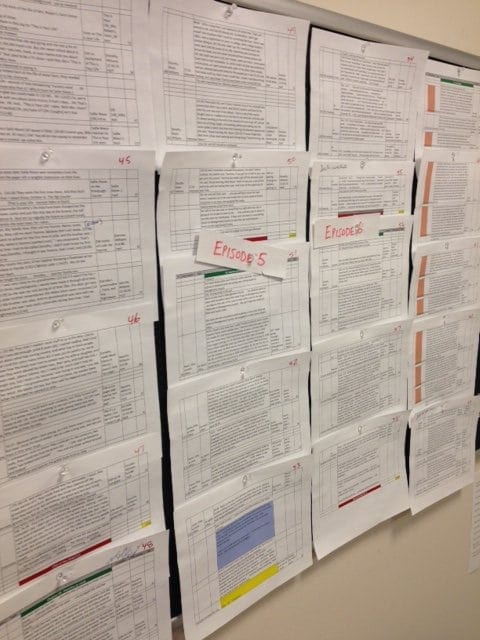 A storyboard in the WABE studios shows plans for the various episodes of Buried Truths. Episodes of the new podcast examine civil rights cold case murders. (Photo by Gail O’Neill)

ARTS ATL: Despite the 235 pages of FBI documents you were able to obtain, thanks to the federal Freedom of Information Act, there were many holes in record-keeping required for your research. How do you cope with that frustration?

Klibanoff: I always believe there are records yet to be found, and they will surface. In this particular case, we don’t have documentation about a particular trial that took place. But hope springs eternal in my throbbing heart that somewhere, in a closet in some rural county, lies a transcript; or a court recorder’s punch tape; or a court reporter’s hand written notes in shorthand that could reveal to us all the things that were said and done at this particular trial. My hope is that whoever the court reporter was back in 1948 turned over her court reporting business to her daughter, and that her daughter turned it over to her daughter, and now — three to four generations later — someone keeps moving those boxes of old court records. And that some day we’ll find them.

ARTS ATL: Will there be an opportunity for listeners to gather, engage in dialogue and help reconcile these buried truths in a group setting?

Klibanoff: At the close of each episode, WABE will invite listeners to leave a voice memo at Stories@buriedtruths.org. We want to see what the reaction will be . . . If there’s a groundswell of interest from a particular community, asking to organize so we could talk about it, certainly we would do that. Without giving away some really interesting developments that take place during the podcast, I think people will see the path toward those discussions.

New episodes of Buried Truths are released each Monday. Downloads are available on Apple Podcasts, Google Play and Stitcher.