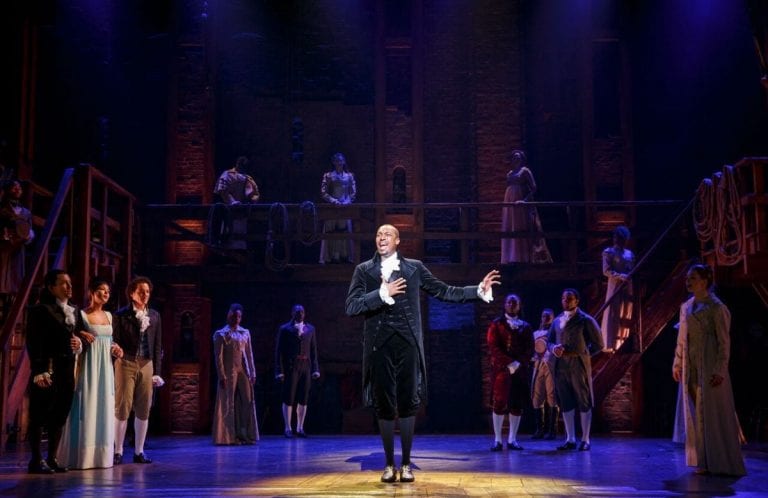 Hamilton arrives in Atlanta May 22 for a run at the Fox Theatre.

Tickets for the Broadway smash Hamilton at the Fox Theatre will go on sale April 8 at 10 a.m.

The highly anticipated show will be at the Fox May 22 through June 10. Tickets will be available through the Fox Theatre website.

There will be a limit of four tickets per person, with prices that range from $80 to $330. There are a select number of $550 premium seats available. There will also be a lottery for 40 $10 orchestra seats at each performance.

Hamilton is the story of Alexander Hamilton, an immigrant from the West Indies who became George Washington’s right-hand man during the Revolutionary War, became the country’s first Treasury Secretary and fought an infamous duel with former Vice President Aaron Burr.

The musical — which incorporates hip hop, jazz, blues, rap and R&B — opened at the Richard Rodgers Theatre on Broadway in 2015 and received 11 Tony Awards, including Best Musical. It also received the 2016 Pulitzer Prize for drama.

The book, music and lyrics are by Lin-Manuel Miranda.

Hamilton producer Jeffrey Seller urged fans to obtain their tickets through legitimate channels. “It’s tempting to get tickets any way you can,” Seller said in a press release. “There are many sites and people who are selling overpriced, and in some cases, fraudulent tickets. For the best seats, the best prices and to eliminate the risk of counterfeit tickets, all purchases should be made through the Fox Theatre.”