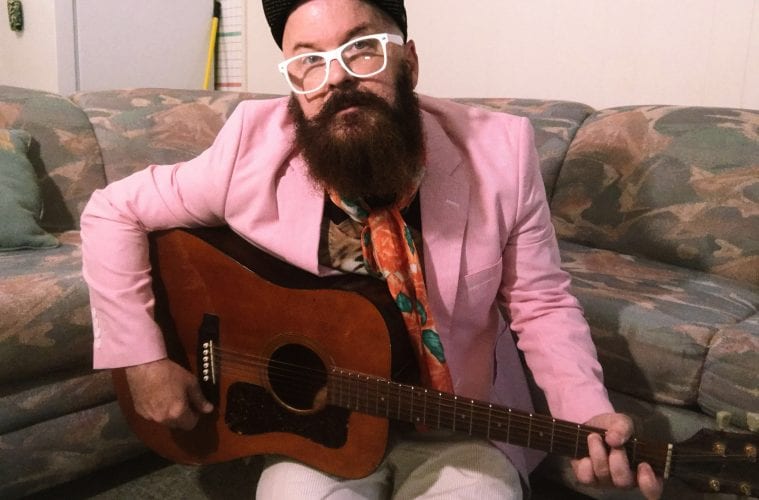 For recovering singer-songwriter Angie Aparo, life is a flower, life is a gun

The title of Angie Aparo’s most recent album, Life is a Flower, Life is a Gun, is about as autobiographical as it gets. In 2002, already a singer-songwriter on a rising trajectory, the then-41-year-old former Atlanta music scene regular turned Nashville asset earned widespread acclaim when Faith Hill notched a hit with her rendering of “Cry,” originally composed by Aparo for his 1999 album The American. Around the same period, Hill’s husband, Tim McGraw, covered “Free Man,” another Aparo song from The American.

The ensuing years were distinguished by a handful of albums under his own moniker, solo tours and a guest appearance in 2009 singing “Junkyard” with the Zac Brown Band, which was captured for posterity on Pass the Jar: Zac Brown Band and Friends from the Fabulous Fox Theatre in Atlanta (Live). Despite the success, Aparo was growing weary of the Nashville grind when a friend bequeathed to him a virtually perpetual club gig on Hilton Head Island. Happily ensconced with his wife in a bungalow off the South Carolina coast, Aparo was writing songs for a new album, putting the finishing touches on a “meta-reality app” on which he had been working for eight years and “doing some comic and animation stuff” when, in April 2016, he suffered a thoroughly debilitating stroke.

The flower and the gun

“What’s weird, I had just had a physical in Atlanta where my doctors are,” Aparo relates in a phone interview in June, several weeks before his two-night stand on July 19-20 at Eddie’s Attic in Decatur. “I’ve always been athletic, a runner my whole life. No cholesterol, no fat. Two months later, I end up in the hospital with the stroke and they can’t figure out why.”

The “why” turned out to be a carotid artery dissection: one of the arteries in his neck was torn. The injury is rare, typically incurred during a car accident, a boxing match or a mugging. In Aparo’s case, while the cause remains a mystery, the result produced blood clots, some of which reached his brain, triggering the first of multiple strokes.

Stricken on Hilton Head, Aparo spent a few days in the local hospital before an emergency transfer by ambulance in the middle of the night brought him to Savannah Memorial Hospital. The harrowing ambulance ride inspired “John the Baptist,” one of a dozen original tracks on the new album Life is a Flower, Life is a Gun.

“I was trying to remember what my mother told me about praying, how to do it, but my mind was going crazy, and the headache was insane,” Aparo says. “I kept seeing this image of John the Baptist standing there, preaching in the river, saving souls.”

The doctors in Savannah managed to stabilize his symptoms to a degree. Eventually, Aparo’s condition necessitated a trip to Atlanta, where he spent a month under neurological care at Emory University Hospital. A period of convalescence at his sister’s house followed before Aparo returned to Hilton Head.

Thanks to anticoagulants and adherence to a strict regimen of taking it so easy lifting a book was a no-no, Aparo’s injury slowly began healing. Unfortunately, his brain had forgotten how to speak, much less compose 21st-century country-crossover chart-toppers.

“My neurologist said, ‘If you’re going to have a stroke, you had the best kind because language is the quickest thing to come back,” Aparo says with a wry chuckle.

He was lucky, in a sense, according to the neurologist. Music is one of the few activities that engages both sides of the brain at a high level. There is a reason why children learn the alphabet by singing it.

“On doctor’s orders, I walked around Harris Teeter in Hilton Head, singing, ‘There’s the ketchup and there’s the mustard,’” Aparo says. “In a month, I was ten percent better, which is a lot.”

Five-and-a-half months after the stroke, Aparo played a sold-out, two-night stand at Eddie’s Attic, the site of countless gigs during his heyday in the city in the 1980s and ‘90s. In February of this year, Life is a Flower, Life is a Gun dropped, quickly garnering favorable reviews.

Born in Boston, Aparo spent his adolescent years in Florida before the family moved to Atlanta when he was 15-16 years old. A musical prodigy, he sang in choirs, soloing on “Ave Maria” at Catholic Christmas midnight mass. His voice was distinguished by a high-pitched, crystal clear tone that warbles in the right places, traits that remain characteristic of his natural instrument today.

While attending Walton High School in East Cobb, Aparo was recruited into a rock band after responding to a notice in a Buckhead music store. The band played some original material, but mostly popular rock covers, almost nightly in Underground Atlanta at clubs such as Mad Hatter and The Front Page.

“My parents were freaked out, but they made a deal with me,” says Aparo. “If you can keep up your grades, and don’t travel until the summer, you can do it. I would play and come home at three in the morning, catch a few hours of sleep, then go to school from six until noon, come home, do my homework and go to bed. I did that for about a year.”

Married at 18, Aparo says, “I got two good kids out of it, but I’m only good at marriage for about ten years. Been married three times; each one, ten years.”

In his early 20s, Aparo began a stint with Jerry Farber when the famed Atlanta comedian and jazz pianist was headlining at The Lark and the Dove, a popular restaurant and nightclub in Sandy Springs.

“I stayed with Farber for five years, through the time when he opened Farber’s Place in Buckhead,” says Aparo. “By performing all these jazz standards every night, I really learned the nuances of singing.”

Aparo also fronted a band called The Crush, which garnered some interest from “the labels.” But, when nothing panned out, he struck out on a solo journey, playing mostly east coast clubs and small- to medium-size halls. Sometime in the late 1990s, Aparo opened for Steve Forbert in Washington, DC.

“Backstage, I asked Steve what I should be doing. He said, ‘You have to take your guitar and go walk the streets of New York; live in the Village, live the story. The story will come to you and you will become the story.’”

At the time, Aparo was living in Kennesaw with his second wife with whom he had a son, Anthony, now a singer-songwriter in Atlanta. He told his spouse the family didn’t have to move to New York, but he would be spending a lot of time there.

“I had friends on Staten Island who gave me a cellar with a dirt floor to live in,” Aparo says. “I threw down a rug and would stay there for a weeks at a time.”

In Atlanta, he was hosting a song circle at Smith’s Olde Bar. The last such gathering, in 1998, featured Aparo trading tunes with Danielle Howe, Mark Bryan (Hootie & the Blowfish) and Paul Carrack (Ace, Squeeze). The following year, he was in the office of Clive Davis, auditioning for the president of Arista Records, one of the most powerful and influential people in the industry.

“Clive sat four feet away,” Aparo recalls. “I played for an hour, and he signed me that day in his office. I had never played ‘Cry’ in front of anyone. He made me sing the song twice and read the lyrics to him. A week later, he was pushed out.”

Aparo endeavored to persevere. He kept making records including 9Live, a live-in-the-studio performance at Atlanta radio station 99X, which was released in 2004. He toured with drummer Derek Murphy and sometimes with a full band, playing the main stage at Music Midtown and in front of a sold-out audience at Center Stage. He got divorced, became depressed, got some therapy, received a cowriting credit for Miley Cyrus’ “Two More Lonely People” (about guess whose divorce?) and watched with increasing dismay the music industry he had maneuvered through with measurable success evaporate into a streaming cloud of downloadable electromagnetic pixie dust.

Then came the gun (the stroke), followed by another blooming of the flower.

For the Eddie’s Attic gig, Aparo says he will be playing selections from the new album and the archives with regular sidekick Yannie Reynecke on guitar and mandolin. The all-acoustic set will be a departure from the electronically enhanced studio sessions for Life is a Flower, Life is a Gun, which prominently features computer effects including the voice of Siri, one of the singer-songwriter-stroke-survivor’s most cherished language relearning aids.

“I’ve been reading Ram Dass my whole life,” Aparo says. “I’m a Jewish Buddhist who loves Jesus. The one thing the stroke drilled home to me is that there are stories, and then there are songs. At the end of the day, as Neil Young once said, it’s all one song.”