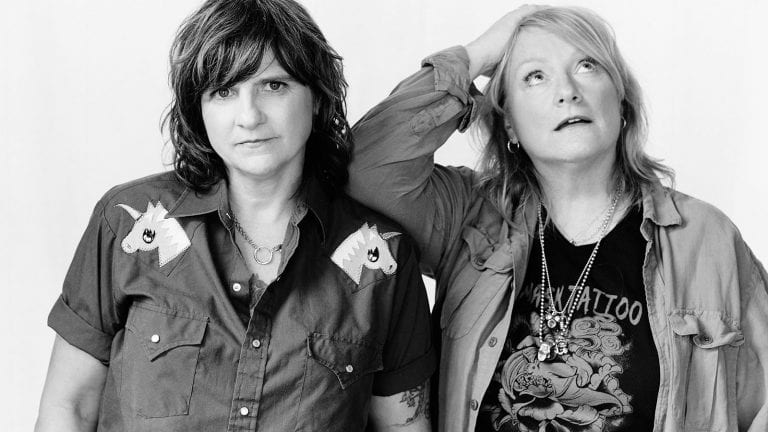 Emily Saliers and Amy Ray met in elementary school in Decatur, began to sing together in high school and had their first public performance in front of their English class. Four decades later, as the Indigo Girls, they are one of the most popular folk music duos ever and return home Thursday to perform at Chastain Park.

Saliers and Ray are on tour to promote their new album, Indigo Girls Live with the University of Colorado Symphony Orchestra. The album, recorded in Boulder with a 64-piece orchestra, features most of their cornerstone songs with orchestral arrangements written specifically for the album.

Saliers recently chatted with ArtsATL during a break in their summer tour, shortly before the album’s release. After the tour concludes, she says they will travel to London to work on a new studio record.

ArtsATL: How did this live album with University of Colorado Symphony come together? 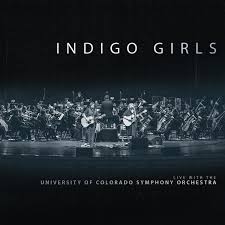 Emily Saliers: We do a handful of symphony shows a year, but it’s sporadic. We were invited by an agency that puts together artists with symphony orchestras. We were very excited. We picked a couple of arrangers — Sean O’Loughlin and Stephen Barber — and gave them 25 to 30 songs.

Sean does all the arrangements for Amy’s songs, and Stephen did mine. I had long conversations with Stephen. He would send me digital mock-ups. It was intimidating at first. The first live show, I was nervous. There was no click track (to keep time) and no drummer. We had to be very precise, and that was pretty scary. But it was a thrill. We were honored to have been chosen.

ArtsATL: This isn’t the first time you’ve worked outside traditional bounds. In 2001, the Indigo Girls performed with Atlanta Ballet in the Fox Theatre in Shed Your Skin.

Saliers: It was like, oh god, how did we get invited to do this? We immediately had a great rapport with [then-Atlanta Ballet artistic director] John McFall and [choreographer] Margo Sappington. You can’t make mistakes, because everything is set in place; that’s not what we were used to. Atlanta Ballet challenged us, and to do it in the Fox in our hometown was amazing. It was gratifying.

ArtsATL: Did you know from the start that there was something magical in your harmonies with Amy?

Saliers: We never stopped and said, “Wow, what we’re doing is good.” Amy has a lower voice, and I have a higher voice, and they blend. I grew up singing in choirs and doing state competitions in chorus. Amy had to learn how to sing harmony. She’s very physical in her guitar playing. We just, without any great intent, fell into it.

ArtsATL: The Indigo Girls have been together for more than 30 years. That’s longer than a lot of marriages. How have you managed that?

Saliers: We spend a lot of time apart and create our own projects. Amy has Daemon Records and her solo albums, and I went into the restaurant business. When we come back together, it’s fresh. We make a new set list every night. We have the same set of values. We are as different as night and day in so many ways, but everything that united us is still intact.

We met in elementary school. In high school, we played together and were friends in the chorus. I went over to her house one afternoon, and we learned some cover songs. Our English teacher asked us to play for our class, and then we got fake IDs and began playing in local bars. Caroline Aiken and Dede Vogt really helped us.

We never had any aspirations of becoming famous, getting signed to a record deal. We started out with a pure love for what we were doing. We started out playing cover songs.

Playing the Little Five Points Pub was the pinnacle for us. Then we opened for The Roches and other folks at the Moonshadow Saloon. Playing at the 688 club was a coup for us because they didn’t book girl groups. We just kept growing. We opened for Patti Smith, the Grateful Dead and REM. Looking back, it’s unbelievable what we’ve done.

ArtsATL: In the late ’80s, the Little Five Points Pub was at the center of an exciting Atlanta music scene. Benjamin formed his first band there, The Opal Foxx Quartet. Colonel Bruce Hampton played Monday nights. Tinsley Ellis played there. And the Indigo Girls. How do you reflect back on that scene?

Saliers: That was the funnest thing we’d ever done in our lives. There was a motley crew playing there. Benjamin was so different. The Ellen James Society was playing there. Tinsley Ellis, Colonel Bruce Hampton, Caroline Aiken. And The Georgia Satellites. It was a very nurturing scene around Little Five Points, and I don’t know if there’s anything like that anymore. Eddie Owen came in and saw us there, and asked us to play at Trackside (his club prior to opening Eddie’s Attic). So Little Five Points Pub was the anchor for us. Everyone was so different, but we were a community. The Little Five Points Pub was a profound experience.

ArtsATL: What guitars do you play?

Saliers: I have two Martins. One is a J-40 that is near and dear to me. It was the first nice guitar I bought. It’s blonde. Then there’s the D-45; it’s made of koa wood and a little lighter weight. It’s my baby.

ArtsATL: The Indigo Girls have always been activists in the tradition of great folk musicians. What’s your take on the current political climate in this country?

Saliers: I’m reading a lot of American history. There were times the whole universe seemed like it was teetering on the edge. We have a terrible, terrible president right now, and an environment of separation and racism. I have faith that the pendulum is going to swing back. Amy and I are involved in voter registration, sensible gun legislation. We try not to lose hope. These are very troubling times, especially the rise in suicide rates and bullying. It’s a toxic environment, and you have to hang on to your goodness.