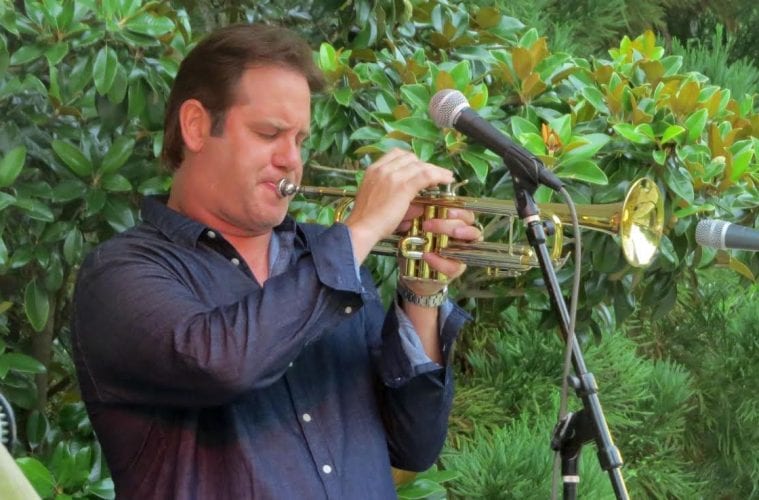 Friday the 13th proved lucky for last weekend’s “Jazz on the Lawn” concert by Joe Gransden at Callanwolde Fine Arts Center’s cozy outdoor amphitheater. A hazy sun occluded by an overcast sky steamed the air on an evening with better than 50/50 odds that thunderstorms would drown out the show, but in spite of a lightning show that began after intermission, the rain stayed away long enough for the concert to play out its full length and allow even those who had walked there to saunter home without opening an umbrella.

As for Gransden’s part, on this occasion he brought a quintet of top-notch musicians: himself as trumpeter and vocalist, John Sandfort on tenor sax, pianist Tyrone Jackson, bassist Neal Starkey and drummer Marlon Patton.

Gransden kicked off the show with two popular standards, “I Love Being Here With You” by Bill Schluger and Peggy Lee, and Jule Styne’s “Just In Time,” with lyrics by Adolf Green and Betty Comden, from the 1956 musical Bells are Ringing, presented by the band in a quartet configuration. Although he began his career as a trumpeter, Gransden — whose singing is redolent with vocal mannerisms of Frank Sinatra — began alternating trumpet with vocal early in his career after an Atlanta restaurant manager threatened to hire a different band if he couldn’t add a vocalist to the group without additional pay. To keep the regular gig, Gransden began doing the vocals himself, learning to sing on the job.

Saxophonist John Sandfort joined the group on stage for the popular Brazilian bossa nova standard, “The Girl from Ipanema,” with Gransden swapping over to the mellower flugelhorn. The song topped out at number five on Billboard’s “Hot 100” in 1964, spent two weeks at number one in the magazine’s “Easy Listening” chart, and from there made its way to every elevator in the country.

In a shift of gears, then came an original, “The First Time.” It was the first song Gransden ever wrote, at age 22, and proved a fine showpiece for all of the band’s members, with some complex rhythmic and metric moments for the whole ensemble, Starkey’s fast-walking bass underscoring the flexibly fleet-fingered Jackson’s right hand figurations.

Throughout the concert, Jackson, Starkey and the matched-grip set drumming of Patton were tightly in sync; Gransden and Sandfort, in passages when they were playing the same lines in octaves, sounded like one instrument, totally fused in tuning, phrasing and inflection, while turning out hot solos on their own, as did the other band members. Starkey got a nice lyric feature in the upright bass’s upper range in the slow ballad “Just The Nearness Of You” before swapping over to slappy electric bass guitar for the next song.

Of special interest to trumpeters, Gransden announced he was playing his grandfather’s trumpet, a 1931 handmade New York Vincent Bach, using a later-made Mount Vernon Bach 1C mouthpiece. In playing a number dedicated to his grandmother, Gransden demonstrated knowledge for historical technique, playing in the slightly different style of his grandfather’s era, with a faster vibrato and other characteristics of that earlier jazz age.

For the balance of the show, Gransden’s crew got in charts ranging from hard bop to pop ballad — from Charlie Parker to Glen Campbell. One number had Gransden and Sandfort up in the audience, playing in a long antiphonal dialogue, unaccompanied, across the middle section of seating that was between them, before walking back down to in front of the stage where the rhythm trio of bandmates at last joined in for the song’s home stretch.

The band brought forth a couple more Sinatra legacy songs in the course of winding down the concert, including “That’s Life” and closing with “My Way” in memory of deceased long-time fan Bob Lang.

Some of the same charts played by the quintet in this concert also are featured in 19-piece big band arrangements on Gransden’s latest album, Go Getta, which was recorded last September at Brighter Shade Studios in Atlanta and released this year on Cafe 290 Records, with saxophonist Kenny G featured as special guest on the title track. Joe Gransden’s Big Band is also scheduled to play a “Sunday Dance Party” this coming Sunday at the Vista Room.

Two concerts remain in Callanwolde’s summer “Jazz on the Lawn” series: Bradford Rogers on July 27 and Bob Baldwin on August 10.