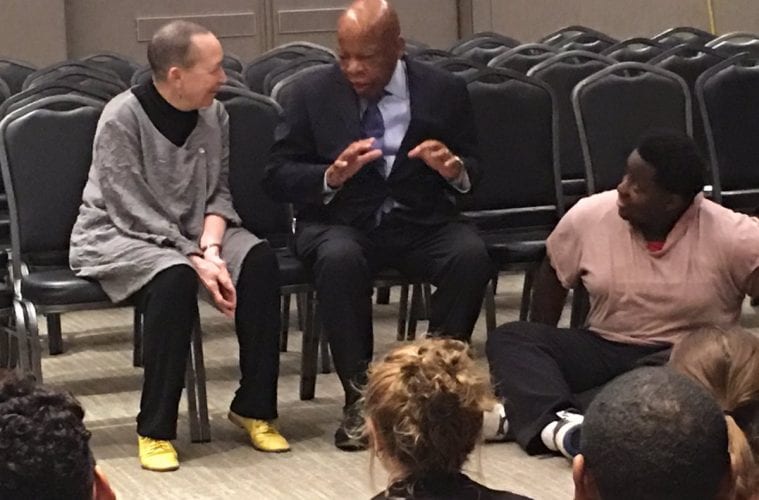 The Alliance Theatre’s Mellon Playwright in Residence Pearl Cleage will guide a group of Atlanta-area high school students in a production inspired by Our Town for the annual Palefsky Collision Project for Teens. The free public performances will be July 27 and 28 at the Rich Theatre at the Woodruff Arts Center.

Cleage has helmed the project for the past eight years. “Each group has been unique, bringing their own special gifts to the process,” she said in a press release. “This group is no different. Within our circle, we have a dynamic diversity that reflects the changing face of metro Atlanta in the most beautiful way. Working with these young people always energizes me, combats any cynicism that might be lurking in my weary brain and fills me with hope for the future.”

The teens will take Our Town as their inspiration to create a new piece that is sparked through their contemporary prism. The students will write and shape the new work. Cleage will be aided by director Patrick McColery and assistant director Rodney Williams.

The Opera Guild for Atlanta has established an endowment to support annual scholarships to promising young singers from area colleges and universities.

The Tommy Trotter Memorial Scholarship is named in honor of the native Atlanta tenor who had a 25-year career with such companies as the New York City Opera and Washington National. When Trotter passed away last year, his husband, Dr. Cecil Benoit, decided to honor his memory by establishing the scholarship. The scholarship fund now has an endowment of $23,000, allowing it to be awarded in perpetuity.

This year’s $1,000 Trotter Scholarship was awarded to Joanna Burrell, a soprano from Gwinnett County who is a graduate student at Georgia State University. Also receiving a $1,000 scholarship this year was Emma Robertson, a soprano studying at the University of Georgia.

“This wonderful donation makes a huge difference in our ability to fulfill the guild’s mission to support evolving vocal artists,” said Megan Mashburn, co-chair of the organization’s scholarship committee. Synchronicity Theatre has received a Managing for Excellence Award from the Community Foundation for Greater Atlanta.

The annual award recognizes operational innovation and effectiveness for nonprofits. The theater has offered a diverse array of theatrical productions, with a 49% increase in individual ticket sales since 2014. Each organization will receive a $75,000 grant from the foundation, consulting services and participation in a nonprofit management class at the Kellogg School of Management at Northwestern University.

“The award is humbing,” Rachel May, Synchronicity’s producing artistic director, said in a press release. “Excellence is always our goal as we engage, empower and uplift voices in our community. We do this while keeping our hearts set on collaboration and bridge-building. This award is a powerful recognition of our 20 years of service to metro Atlanta, and an affirming investment in our future.”

The YMCA of Metro Atlanta also received a Managing for Excellence Award this year. Cartersville’s Booth Western Art Museum will soon host the largest exhibition of works by Frederic Remington ever in the South. Opening September 8, Treasures from the Frederic Remington Art Museum and Beyond will feature more than 60 original pieces of Remington’s work from the Frederic Remington Art Museum in Ogdensburg, New York; the Buffalo Bill Center of the West (Cody, Wyoming); the Birmingham Museum of Art (Birmingham); and private collections, including several pieces on loan from Atlanta-area families. The opening event will feature a keynote lecture on the process behind Remington’s famous bronze sculptures from Michael Shapiro, former director of Atlanta’s High Museum, current senior advisor to Leslie Hindman Auctioneers and a leading expert on Remington’s work. The show will run through January 13, 2019.