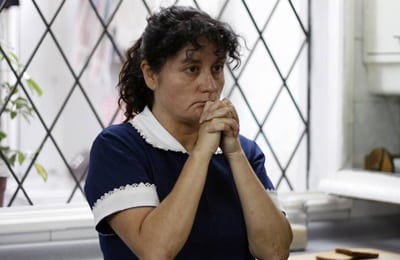 Half child, half crone, Raquel (Catalina Saavedra) has worked for two decades as a live-in housekeeper for a honey-blond, privileged Chilean family — who love and fear her in equal measure.

At first glance writer-director Sebastian Silva’s “The Maid” looks like a fly-on-the-wall, sociological study of class barriers. He gets the details right. Sure, the family surprises Raquel with a cake on her birthday. But most nights, she is expected to eat by herself, in the kitchen, with the door to the dining room securely shut. “The Maid” shows the gracious ease/condescension with which the household takes Raquel for granted. Yet it also reveals the ways she can be both servant and terror to her “superiors.” (The biggest example is a bitter cold war between Raquel and the eldest, college-age daughter — a feud whose source is never disclosed, which seems the right choice.) The 20-year status quo gets upended when Raquel’s severe headaches and fainting spells inspire the family’s well-intended mother, Pilar (Claudia Celedon), to give the maid some relief by hiring an additional servant. Or several.

Here we see Raquel as a sort of Latin American Bartleby the Scrivener — only in reverse. She doesn’t prefer not to do her job. Rather, she refuses to take a break, even when she’s just been hospitalized. One after the other, she targets the new housemaids — a sweet teenage Peruvian girl, a weary middle-aged cook — with tactics that are hilariously blunt. (Her most effective move? Locking the women out of the house the moment they stray outside.) The success of “The Maid” depends on the central performance, and Saavedra — with her bulbous eyes and grim slash of a mouth — delivers a doozy. Her Raquel comes off as borderline autistic, unfamiliar with the normal codes of emotional behavior that rule most people’s lives. (The script gives just enough hints about a thwarted childhood, without resorting to movie-of-the-week psychology.) But people, even oddballs like Raquel, can change.

“The Maid” is a quirky character study that twists its way with surprising confidence through many different moods: blackly comic, psychologically ominous, but ultimately tender and emotionally expansive. At times, it can make you laugh out loud, in discomfort. You expect the very worst to befall either Raquel or the family. (It’s hard, watching the movie, not to think of the grim French film “La Ceremonie” or Jean Genet’s play “The Maids.”) Writer-director Silva’s biggest surprise is that he sets us up for a wicked punchline, then ends his movie with something else entirely.