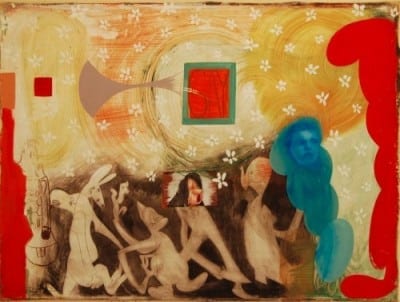 “More Mergers & Acquisitions” at the Atlanta Contemporary Art Center samples art from the 1970s to the present, finds treasures hidden in the homes of local collectors, mixes works of Atlanta artists with historical figures and peers from other places.

Artistic director Stuart Horodner’s installation of the show draws the works into dialogue with one another. Here is an excerpt from my review in the AJC about a section of the show titled “Familiar Faces”:

“William Wegman’s “Stomach Song” (1970-71) takes us back to early, ad-hoc days of video art. No production values here: just a view of William Wegman’s torso, which suddenly looks like a face and seems to make noises when he tightens his stomach. If you don’t think this is funny, you are way too serious.

In contrast, Arnulf Rainer’s 1975 self-portrait radiates psychological intensity. The Austrian artist has savagely scratched away at a photo of himself to suggest rage and a will to self-annihilation.

Rainer’s piece is echoed in “Farrah” (1995). Curtis Mitchell covers a photo of Fawcett’s face with a compound of dirt and cosmetics and melts it into ghoulish goo. All that is left is the famous hair-do. A comment on celebrity when it was made in 1995, the piece takes on a grimmer connotation in light of her recent death.”

This gallery includes three more familiar faces: the Man in the Moon, who pleasures a woman in a Joel-Peter Witkin photograph; Osama bin Laden, limned by Atlantan Heidi Aishman using make-up; and a Happy Face pressed into a sandwich–a drawing by Leah Busch, which documents what she did to her PBJ before eating it for lunch. You can make your own connections.