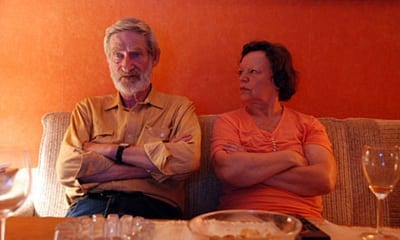 When Inge (Ursula Werner) tells her lover she can’t meet him on Sunday, her excuse is pretty uncommon: “I’ve got the grandchildren.”

The tale of a late-life extramarital affair, “Cloud 9,” from Germany, isn’t exactly heavenly. But it’s the sort of film whose bare-bones aesthetic is refreshing … until it becomes wearisome.

In his slice of kitchen-sink realism, director Andreas Dresen gives us Berlin residents Inge and her husband of 30 years, Werner (Horst Rehberg). She’s a 67-year-old seamstress who works from home. We don’t know much about him, except that he’s a little older, helped raise Inge’s children from a previous marriage, and still loves her very much. She loves him, too. So she’s as surprised as anyone when she falls in love (and onto the floor, in a pile of seasoned flesh) with her 76-year-old customer Karl (Horst Westphal). Fair warning for the prudish or the gerontophobic: “Cloud 9” gets its three lead actors out of their clothes repeatedly. The nudity and the dogged ordinariness of its characters are the film’s prime badge of honor, the reason it exists. As a study of three unexceptional people experiencing raw emotions years after they thought such things were gone from their lives, it is definitely unique. So let’s look at the film’s pluses first. There are no villains here. Inge doesn’t embark on an affair to punish Werner for some past slight. Neither is Karl a prince charming nor a scoundrel. Until a badly judged, melodramatic ending, the film is emotionally fair and modulated. Best of all, the acting by all three leads is deeply committed, and their weathered, open faces make for wonderful canvases.

Yes, it’s unusual for a movie to be as prosaic and unformed as real life. But “unusual” doesn’t always translate into “entertaining.” Working from an outline rather than an actual script, the actors improvise all their own lines. This freedom sometimes underscores why writers are useful. The actors are very good at making these characters “real.” They’re less successful at making them interesting. And, yes, it’s pleasing to see that Inge is given appetites as hearty (and, sometimes, reckless) as any man’s. But the lack of any deeper understanding of who this woman truly, deeply is makes some of her actions and attitudes seem increasingly selfish, or stupid. Even so, there’s a compelling purity to the filmmakers’ approach, as the camera lingers on shots of foliage or moody city streets, or follows the characters around the city in real time. But after a point, it’s a game of diminishing returns; you wish the film would just get on with things, and stop stretching 45 minutes’ worth of plot into twice the running time.