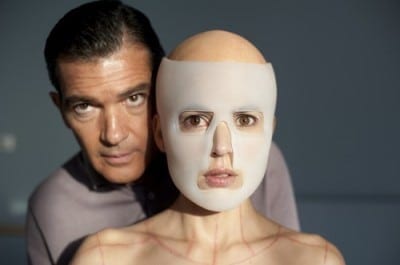 Review: Kinky plot in Almodóvar’s “The Skin I Live In” needs more juice

For a movie with its share of spilt blood, watching Pedro Almodóvar’s “The Skin I Live In” is a weirdly bloodless experience. Here’s something I never thought I’d say about a work by the Spanish writer-director, who made “Women on the Verge of a Nervous Breakdown,” “Law of Desire,” “Talk to Her” and more other remarkable films than you’d expect from just one man: it’s cold, and sometimes boring. That’s despite the inherent kinkiness of its plot, which at first glance seems perfect material for the filmmaker.

Working with Almodóvar for the first time since 1990’s “Tie Me Up! Tie Me Down!,” Antonio Banderas plays Robert Ledgard. A cutting-edge plastic surgeon, Robert lives in a splendid, isolated villa — equal parts aged, crumbling stucco and gleaming, antiseptic modernity. It even has its own operating theater, which comes in handy.

Robert’s housekeeper Marilia (Marisa Paredes, the theatrical diva of Almodóvar’s “All About My Mother,” with too little to do here) tolerantly oversees Robert’s mysterious housemate. That’s Vera (Elena Anaya), a stunning young woman sequestered in a minimalist chamber and swathed in a Band-Aid-colored body suit. She’s also, we discover, wrapped in a layer of skin genetically engineered by Robert to withstand the direct heat of a blowtorch.

Who is Vera? Why is she imprisoned? What has all this got to do with the doctor’s late wife, who suffered major burns in a car accident some years ago? Oh, and wasn’t there a daughter in Robert’s past, too?

This all sounds more intriguing than it plays. “Skin” feels like an almost pro forma version of Almodóvar’s now familiar structure, full of narrative Gordian knots, flashbacks and surprise revelations. But the result comes off like the work of a sincere but less talented acolyte. It’s unconvincing. Maybe that’s because the director is working from a novel by Thierry Jonquet. It’s only the second time he’s adapted someone else’s material (the first was “Live Flesh,” also lower-shelf Almodóvar).

The movie includes a few things you’d expect. Its interiors are flawlessly art-directed. And a casually rude exchange in a secondhand shop, about clothes for fat women, has the non sequitur tang of the director’s old work. But the familiar echoes aren’t all good. The intrusion into the movie of an on-the-lam criminal-turned-rapist feels like an ugly reprise of a similar setup in his uneven “Kika.”

“The Skin I Live In” lacks the juice and passion of Almodóvar’s better work, though Banderas and Anaya are both fully committed to trying to flesh out, so to speak, difficult roles. But Alberto Iglesias’ engaging, skittery score for strings suggests a level of tension that rarely emerges on screen. That said, even inferior Almodóvar is always worth a look.