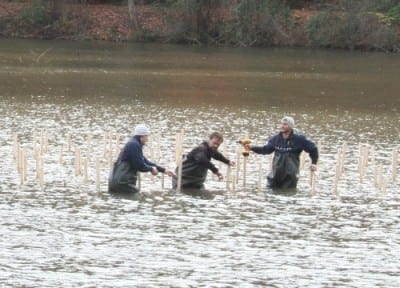 Atlantans have a unique opportunity to work with internationally recognized artist John Grade (pronounced grah-dee). He is in residence at Emory University through November 19, as part of the Center for Creativity & Arts‘ year-long focus on water, and needs volunteers to help him construct a temporary site-specific work.

I recently sat down with the environmentally oriented artist to hear about the project and how people can get involved.

Rebecca Dimling Cochran: You’ve come to Atlanta to create a work you call “Piedmont Divide,” an outdoor commission on the Emory campus. Can you tell us a bit about how the project came about?

John Grade: I had a visit here for two days in the summer and had that time to decide what the spark would be, how I would respond specifically both to this environment and the community. A lot of that had to do with meeting many, many people across campus and in different departments. The two biggest sparks came from the Environmental Science Department — I am very excited about the work they are doing with the West Nile virus — and the Dance [and Movement Studies] Department.

So just to back up, the project really has a lot to do with this idea of how we do or don’t understand the landscape of community. I really have a superficial understanding coming in, so I like this idea of dividing the sculpture into two parts so we have to necessarily experience it in an incomplete way and that it will involve a journey between two sites to understand the project in its entirety. So half of the sculpture will be sited so that it appears to be floating on the lake [in Lullwater Preserve], and the other will be floating up in the tree branches on the Main Quad. By experiencing one and then going to the other, you can put these two things together and eliminate that divide.

John Grade and assistants build the infrastructure for the sculpture in Candler Lake.

Formally they will be similar, but there will be some distinct differences, especially as you experience them. On the lake, you are not going to be able to have close proximity. You’re going to look across the plane and view it that way, unless you’re really adventurous. [Laughs.] In the Quad, you’re going to have this similar but inverted scenario of a plane, but you’re going to be able to walk under the piece and really understand the specificity of the material in a way that you wouldn’t at the lake. I think there’ll be this quiet rewarding moment when you realize that, hey, this is made out of recycled bottles . You may not quite know how they’ve taken this new shape, but you’ll at least understand that it is plastic.

Each of these kind of icicle-like extrusions that we are creating are going to cup at the bottom so they can hold just a little bit of water, the idea being that we’re referencing this kind of incubator of mosquito larvae, which is a problem in Atlanta. The short story with that is just that Atlanta’s waste-water system is overwhelmed, and as a result there is a bunch of stagnant water, which is the kind of water that this particular type of mosquito wants to breed in.

Cochran: You’ll be working with the students to build the piece. Is it true that you’d welcome additional help from the community?

Grade: Absolutely, because the whole idea behind this piece is to design it such that it is being made by as many people as possible and that each person will quietly affect the total outcome. So the broader the community support we have, the more interesting the piece will be and the more outside my direct control the piece will be, and therefore, I think, way more interesting. It will be something that one person couldn’t have envisioned or made.

Cochran: Your choice of materials is often inspired by your surroundings, and I was curious to see what indigenous plants and trees might attract you. Yet from what I’m hearing, “Piedmont Divide” is going to be made in large part in plastic. Can you explain your choice?

Grade: When I came, I was looking into materials that made sense that were indigenous to this region. And Coca-Cola is solely responsible for having made Emory what it is, or at least as I understand it. I saw their machines everywhere, and I thought about their recycling system that seems so cohesive and how I could simply tap into it, borrow from it for a while and then return to it.

Cochran: So your plastic “rain catchers,” if you will, are made from Dasani water bottles?

Grade: Not just Dasani, but any Coke product that came from a plastic bottle and was consumed on the campus or within the immediate community. We heat-form them and they don’t look like a bottle anymore, but when we are finished with them, we simply return it to the stream of recycling that already exists.

Already I’ve heard from the people who’ve been prepping the bottles over the last week or two how much water is involved in cleaning them and how much time it takes to remove the wrappers. We think we have this nice tidy system of what it is to recycle, and I’m sure they are more efficient than what we are doing, but there is a heavy cost to this. It’s not just “I can feel good about myself because I put this in a recycling bin.” We have to look a little more carefully and think about why we are drinking water out of plastic bottles. It just seems like I’m addressing water. I’m addressing the way we get rid of water. What more appropriate material than what we’re housing it in here in this kind of Coca-Cola epicenter?

Cochran: In previous works such as “Collector” (at right), you placed a sculpture in three different locations and watched how the environment changed it. For example, when it was placed in the ocean, sea kelp and barnacles grew on it. Then, moved to the desert, it dried out and the wood became brittle and broke away in places. Do you intend “Piedmont Divide” to have a similar evolution?

Grade: This material is so fixed that we’re not going to see, in this short of a window, the plastic break down or moss grow. But what we will get is what’s developing (and this is very subtle) in the bottom of these little spoon forms. At the bottom of each of these kind of stretched icicle forms there is a little place where the water can collect, and that water will stagnate. So it’s going to very viscerally reference this issue with West Nile virus, and hopefully that is where we draw some attention to that specific issue.

Cochran: Clearly, location is also very important to you. How did you decide on the Main Quad and the lake at Lullwater Preserve as the sites for your sculptures?

Grade: I like the visibility and the formality of the Quad. Knowing that it was going to get a lot of traffic, I wanted to juxtapose that with something that was a little more out of the way. The lake made sense on that front, but it also made sense in that it is literally a body of water, which is what we are trying to address.

In speaking with James Johnson, who is in charge of grounds, I learned it is an artificial lake and that at no point is it more than three feet deep. So it was just a wonderful opportunity. You can go out there and walk around in the middle of something that looks like it should be 40 feet deep. And we will be able to build a scaffolding that is just inches below the surface that we can affix all of our sculptural elements to. Plus the dancers can come in and essentially be walking on water out in the middle of the lake amid the sculpture as they take it apart according to whatever choreographed logic makes sense.

Cochran: So the disassembly of the sculpture will take place at a particular time, not by you but by a group of dancers?

Grade: Yes. Lori Teague in the choreography department and I are having this conversation, and we need to really develop it further along so that this is not something I build and she responds to. I want her to have input along with the people who will be performing and say, “I see what you’re doing, but can you do this? Can you make this? We’d like to swim under it here and arrive at this place, stand there.”

I’m also building the piece on the Quad like a spider web that is suspended on a plane 25 feet off the ground. It is attaching to only four trees, and each of these points will be pulley points. So all we do is release tension and this whole form can move and interact with the human form. It can collapse ultimately that way. So [Lori and I] have to figure out how that can come apart in an interesting way.

We have a timeline for the piece, which is about four or five months, and it culminates with how it comes apart. I think that is going to be a high point, but it certainly is not the only point that is interesting. I think it is very interesting to see it come together. The way we are constructing this is in the type of a spiral, so that both at the lake and up in the tree canopy you begin at the center and radiate outward. I have an idea what a scale that might be most compelling might be, but we may not arrive at that, we may double that. It is organic.

From left: John Grade with Seattle artists Travis Stanley and Dilyara Maganya, who are assisting.

Cochran: What are the opportunities for people to get involved in the project? Are there days and times that you need people?

Grade: The crux of this project is all next week, coming to transform the bottles into the heat-formed shapes. Then we will combine them on strings, on boards, and put them in the water and up above [the Quad]. So a person that says, “You know, I’d love to be here for three hours and help you,” that’s great. If somebody comes for three hours and says, “I’m into this, I’m going to come a couple of more times,” then maybe they get a little more involved in actually starting to choose how these things relate to the other forms as they’re put within the larger structure. So there’s room for a varying level of commitment, and as you commit more, your input begins to affect the way this thing ultimately ends up looking. It’s a pretty direct barometer of the level of engagement.