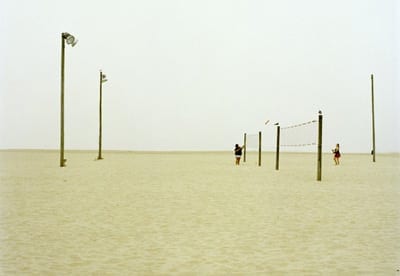 The color photographs in Holly White’s “Cinematic Language” at {Poem 88} mostly involve recording the intimate details of immense vistas. Where many other photographers would focus their attention on the scene as a whole, White worries about getting the complex individual circumstances exactly right, in order to bring out each component part more clearly than an inattentive viewing would allow.

This has involved waiting for the right weather and hour of the day, standing on ladders to accomplish the best camera angle, and waiting for the decisive moment in such places as a not yet populated beach (below), where the figure bending over on the horizon line at the left balances the figure on the right, already stretched out for sunbathing. The minimal geometry of the horizon and two distant human bodies makes for an elegance that turns into comedy as soon as the awkward aspects of the postures come to the viewer’s notice.

White’s completely depopulated landscapes have a similarly constructed combination of formal composition and what can only be called romantic lyricism. A number of them are from early fall, when vivid greens and autumn’s reds and yellows still compete for visual supremacy. In the photographs in which trees and houses predominate, the viewer’s eye is drawn inexorably from foreground to midground and deeper in, pausing at different levels. The more rural scenes are often about such things as the subtle deformations of a single sweeping expanse of grassy hill, or of a meadow interrupted by two small misshapen trees.

The curious thing about this dynamic is that the work isn’t about the nature that is so often spectacularly visible in it, but about how we have modified or completely overwhelmed nature. White writes, “I was drawn to the way we alter natural environments to better suit our needs, mainly for leisure and pleasure. We add grass, hills and trees to create a golf course. We add paths to get us places. Light poles to add light at night, and porches to create an outdoor space outside of our home. I drove alone for days throughout Maryland, Delaware, North Carolina and into small towns in Florida, seeking out quiet places, with minimal people and modern development. [This body of work] is about escape, the search for harmony and the act of dissociation that comes along with it.”

White’s sense of composition and search for the exactly right moment of balance has seemingly proven communicable to students. One of the other jurors (I was one of three) of this year’s “My Atlanta” exhibition noted the unusually perceptive quality of the photographs coming out of Paideia School, in particular how intelligently the elements of the landscape were juxtaposed via camera angle. At the time, none of us was aware that White was teaching there. However, recalling those photographs in the surroundings of “Cinematic Language” suggests a definite influence on the succeeding generation of photographers.