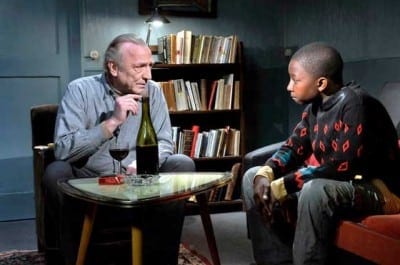 Review: Finnish director Aki Kaurismäki’s too hip by half with his dreadful “Le Havre”

A weird thing happens at film festivals. Deprived of sleep but jazzed by the buzz of the event, viewers — journalists, producers, film buyers — sometimes fall prey to a communal mind-set about a movie that really, really isn’t worth all the hype. Buyer’s remorse follows. (That was literally true for film companies that paid big bucks for such Sundance acquisitions and underperforming duds as “Happy, Texas” and “The Spitfire Grill.”)

Last spring at the Cannes Film Festival, a lot of warm chatter surrounded “Le Havre,” written and directed by terminal hipster Aki Kaurismäki. Let me state some history here: in the years that I’ve been writing about movies, I’ve had a real love-hate relationship with this Finnish director. I hate, hate, hated his “Leningrad Cowboys Go America” from 1989. I admired, with reservation, “The Match Factory Girl” and sorta really dug “La Vie de Boheme.”

That said, “Le Havre” stinks. It’s a con. André Wilms plays Marcel, a shoeshine boy (albeit 60-something) on the streets of the French port town of Le Havre. His wife Arletty (Kati Outinen) is terminally ill, but she withholds that information from her husband so that when she goes into the hospital, he can focus on caring for a teenaged African illegal immigrant named Idrissa (Blondin Miguel), who washed up in a cargo container in the port.

Miguel is such a deeply inexpressive non-actor that he seems chosen by Kaurismäki to telegraph the movie’s intrinsic insincerity. In a riff on the old it-takes-a-village meme, Marcel’s working-class neighbors (grocers, a bar owner) enlist in shielding the boy from not-very-urgent pursuit by police, led by Inspector Monet (Jean-Pierre Darroussin), who wears an old-fashioned fedora to remind us that this is a movie with only a tenuous connection to the real world. Nothing in it feels real.

Writer-director Kaurismäki traffics in a kind of deadpan style that requires his actors to perform with a mild, self-conscious awkwardness. This seems to be a self-protective tic, preserving Kaurismäki from criticism: how can you really rag someone who’s just having a laugh? His kind of “stylization” is baby steps away from amateurism and incompetence, not to mention a deep disrespect for the viewer.

When a filmmaker refuses to commit sincerely to his material, there’s no reason to buy a ticket. Instead, if this movie’s subject seems interesting, check out one on a similar subject that’s as unfashionably sincere (and smart) as “Le Havre” is not. That’s “The Visitor,” written and directed by Tom McCarthy (“The Station Agent”). It stars Richard Jenkins (Oscar-nominated, rightly) as a burnt-out college professor whose worldview gets jump-started when he meets a couple of illegal immigrants subletting his Manhattan apartment.

Yes, it sounds painfully sincere. It is. It’s also honest, shrewdly observed and exquisitely acted. And you won’t feel as if you need to take a bath with some anti-hipster soap after you see it.