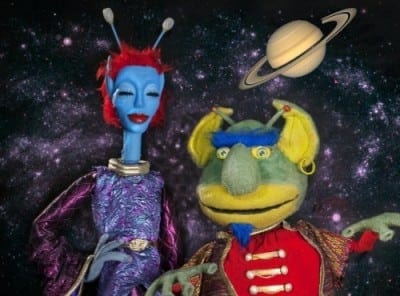 With a blend of puppetry, animation and projection, the Center for Puppetry Arts has created a fun, energetic show for children that explains the often abstract and unfamiliar objects in our universe. From red dwarf stars to the planet Neptune, from comets to black holes, the production uses shadow puppets, hand and rod puppets, computer animation and crystal-clear images from NASA to bring “Space,” at the center through March 11, alive.

The show is a musical — indeed it’s music almost all the way through — and the rousing rap and rock score and clever lyrics (try finding rhymes for “Jupiter,” “Europa” and “asteroid”) keep things lively and funny. Two rod and hand puppets, Ot and Eeema, are our alien guides, and they’re accompanied by a band of shadow puppets that sing songs about the planets as we travel first through our galaxy and then into the deeper reaches of space.

The use of so many different techniques — animation, projections, music, puppetry and often several at the same time — is surprisingly seamless and cohesive. The puppeteers are called on to do a great deal in the show, working a wide range and style of puppets while also singing, dancing and acting.

What’s especially nice is that everything has a slick, finished and professional look, but the viewer can still discern the hand of an artist in what’s on stage. The set, designed by F. Elaine Williams, is colorful, inventive and versatile. What opens as a hilly wooded landscape transforms into a flying saucer, an asteroid belt, the oceans of Europa, a black hole and more.

A scene on an asteroid belt is dazzling in its combination of puppetry, projections and music: the asteroids seem to be everywhere, and the puppet asteroids are cute and sing an especially good number. Illusions of floating in a zero-gravity environment — accomplished by puppeteers clad entirely in black manipulating puppets under black light — are especially effective.

The cut-out overhead projections of mythological and historical characters such as the god Mars and Isaac Newton are well done. But the three main aliens themselves — life-size projections of puppeteers wearing alien heads — were less effective. The heads didn’t connect to the bodies in a convincing way — the real head of the puppeteer was too visible beneath the constructed head — and the material of the headdress wasn’t stiff enough, causing it to bend and diminish the illusion.

In the end, the show conveys a surprising amount of information about space. Children and adults alike will be fascinated to learn just how inhospitable Venus is (sulfuric rain and volcanoes would make it a very unpleasant place for people or puppets) or that Mars once had oceans and still has polar ice caps. I especially liked a punk Saturn singing “I’ve got rings” a la Johnny Rotten. It was a cute joke to have Pluto enter, thinking he could do his own musical number like the other planets, only to have the other puppets point out that he’s not considered a planet any more.

It’s not surprising to learn that Jon Ludwig, the center’s artistic director, has written and directed 20 such shows for the Family Series. Fleetly paced, visually inventive and packed with interesting information memorably conveyed, “Space” effortlessly meshes information and entertainment. Kids’ reactions don’t lie, and the audience of schoolchildren at the opening morning performance I attended was obviously enthralled, clapping and singing along. With humor and music, “Space” will keep children (and grown-ups) informed, laughing and humming all across the universe.