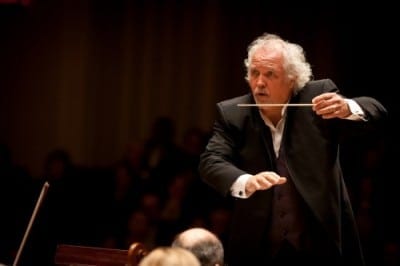 Donald Runnicles conducts the “Resurrection” Symphony by Gustav Mahler, a composer performed much too seldom by the Atlanta Symphony Orchestra. (Photos by J.D. Scott)

Gustav Mahler made one of his rare appearances at the Atlanta Symphony Orchestra on Thursday, when the orchestra performed his Symphony No. 2 in C minor (the “Resurrection” Symphony).

The program, and its repeat performance Saturday, had been planned as a sort of farewell for Donald Runnicles, who was scheduled to leave his position as the ASO’s principal guest conductor. But last week the symphony renewed his contract, so there was more “resurrection” going on than originally contemplated.

Strangely enough, that jibes with Runnicles’ interpretation of the piece. This is, very specifically, a work about death, a subject about which Mahler was quite conflicted. An agnostic whose background was Jewish, he converted to Catholicism, but this apparently was done in an attempt to avoid anti-Semitic prejudice.

Death looms over much of Mahler’s work, and the mood can get quite dark. The “Resurrection” offers opportunities for this, but Runnicles’ approach to it is almost Brucknerian. Anton Bruckner, whose works are often compared with Mahler’s, was a devout Catholic, and his symphonies reflect an optimism and confidence that eluded Mahler. Mahler was neurotic and obsessed with death.

To some extent, his symphonies, and especially this one, work only when a conductor has found a formula for getting the audience inside Mahler’s morbid head. Runnicles’ approach to the first few movements is self-consciously restrained and subtle. He offers introspection rather than craziness. It might not be the most obvious way to get Mahler across, but it provides considerable illumination along the way.

The massive opening movement is subtitled “Totenfeier” (“Funeral Rites”). Gentle beginnings soon give way to violent outbursts, and Mahler’s instructions were that they were to be played “with ferocity.” It’s not as though Runnicles ignored those instructions, but it must be said that he held back a considerable amount of the power at his disposal in the immense orchestra specified by Mahler.

Throughout the work, these dark forces alternate with sounds of the most profound sweetness, and it is on the latter that Runnicles places his emphasis. I don’t think I’ve ever heard a more refined string tone from the ASO. Runnicles’ light texture created a palpable sense of optimism that seemed to win out over the darker assaults, subdued in volume yet given a sort of power by the conductor’s usual emphasis on the lower strings. His pace was sometimes brisk, and even his slow passages were quicker than is perhaps standard, but he made them feel correct and inevitable. The orchestra negotiated the movement’s rapid-fire switchbacks with dispatch.

The genteel approach proceeded through the nostalgic second and third movements, which can be viewed as a look back at the life of the deceased, complete with dancing. What was impressive here was the unflagging focus of conductor and orchestra; every moment of the score was lucid, the sections well defined, and the playing virtuosic.

The fourth movement is where things change. The whole focus here is on death, and looking back becomes an obsession with heaven and eternity. And the music changes from a purely orchestral score to a sung text, with an alto soloist. We got Kelley O’Connor, who possesses a supple, dark-hued voice and an ability to telegraph feelings directly to the listener’s soul. Mahler wrote into the score a five-minute pause between the third and fourth movements, and although Runnicles didn’t go quite that far, he did stop for a bit of reflection.

Nicole Cabell (left) and Kelley O'Connor of the ASO Chorus.

The last of the five movements is where the “resurrection” takes place, abetted by the main orchestra, an offstage ensemble, a chorus, the alto and a soprano. The ASO Chorus was at its best here, whisper-quiet at first, then negotiating every passage with wondrous finesse. Rarely will one hear lower basses singing with such a clean, clear line. Judgment day is portrayed with a massive outburst, and here Runnicles finally unleashed his forces, their power made vivid by the previous restraint. The soprano was Nicole Cabell, and her voice soared effectively over the armies massed behind her.

Runnicles seems clearly able to transport us to judgment day and the resurrection. Whether his approach to the rest of the work is too simplistic, avoiding the conflicts inherent in Mahler and shunning the power of the composer’s darker side, is a question that the listener must answer for himself. Runnicles’ is an intelligent, forceful reading, but a measured and introspective one. With Leonard Bernstein, the great champion of Mahler and especially of this symphony, one left the concert hall drained of emotion and headed to the nearest bar for a drink. With Runnicles, the aftermath is more likely to be a cup of tea.

It must be said that the world of Mahler and Bruckner is one that the ASO visits much too rarely. The Second is perhaps the greatest of Mahler’s 10 symphonies, and it is the one most performed here. One reason is that, like the Eighth (another candidate for greatness), it uses a large chorus, which is the ASO’s great strength. But there is reason to perform the others. They are among the great tests of an orchestra’s mettle. And they are arguably the pinnacle of the entire orchestral repertoire in terms of intellectual heft.

Robert Spano, the ASO’s music director, seems interested in other things, especially modern works, which are a worthy enterprise. Then there are the warhorses, some of which seem to pop up virtually every season, which is a bit patronizing. A vast amount of the ASO’s energy is devoted to pop music, movie scores and the like. These are pleasant enough, but hardly challenging for orchestra or audience.

The people who decide such things have decided that this is what Atlanta wants, and it’s probably futile to argue for change on a major scale. But it would be nice if we could get a Mahler cycle someday, or even just a mini-cycle of a few symphonies. Runnicles brings much to Atlanta in his role as principal guest conductor, and one overlooked aspect is his championing of just this sort of material. Here’s to his success.