There are art festivals, and there are ART festivals. Conceived to showcase contemporary art and build community around it, FLUX 2010, an exhibition of temporary public art, aimed for capital letters.

The most critical challenge was to select artworks that would speak to a diverse audience and maintain a high level of quality and substance. In other words, FLUX 2010 needed to be a sophisticated but family-friendly one-night stand with benefits. 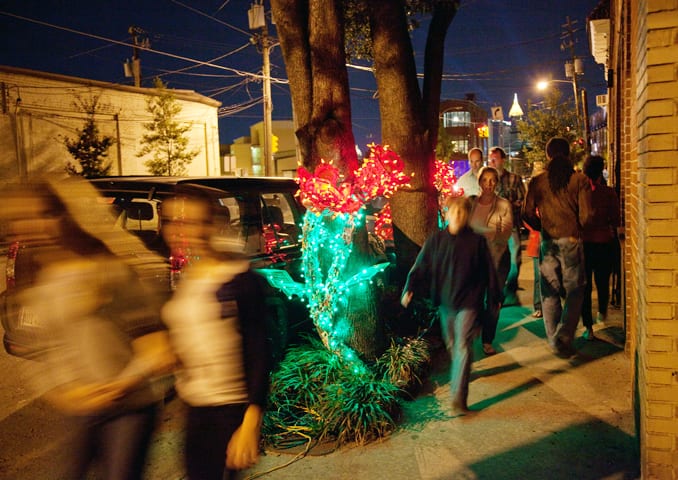 Marisa Dipaolo, “The Garden of Oz.” Photo by Laura Noel.

On Friday night, FLUX 2010 delivered. Blessed with Indian-summer weather and the Castleberry Hill neighborhood’s human scale and character, the organizer, Flux Projects, mounted an evening of serious fun. I was particularly impressed with the range of the scale, tone, content and media encompassed in the 25-plus projects. The roster offered a judicious mix of spectacle and subtlety, wit and seriousness, sensory experiences and amusement.

“Between You and Me,” a five-channel video projection by Atlantans Whitney and Micah Stansell, took the prize for scale, in terms of physical presence as well as artistic ambition. It was a pedestrian version of a drive-in movie, which reminded at least one viewer of the photographs of O. Winston Link. 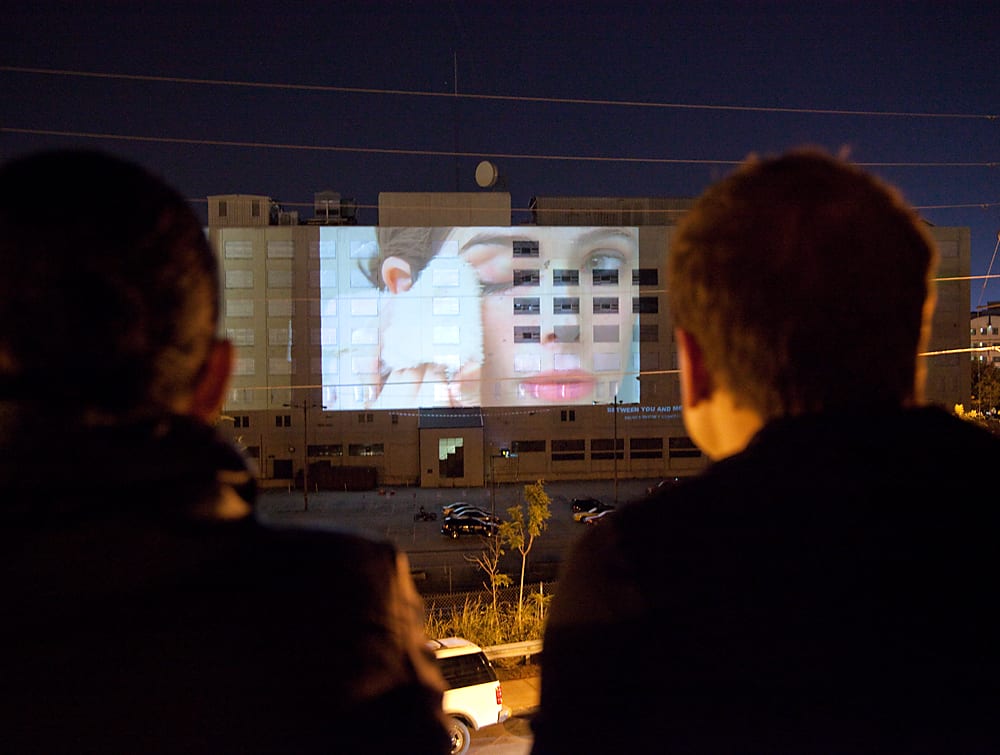 Micah and Whitney Stansell, “Between You and Me.” Photo by Laura Noel.

The gigantic projections, each about 80 by 140 feet and spread across the façade of the Norfolk Southern Railroad Building, wove an elliptical and non-linear narrative of intersecting characters and objects. For instance, a postman delivers a letter to a woman, who slips it, unread, into a copy of Mark Twain’s “Tom Sawyer,” where it remains after she returns the book and a librarian re-shelves it.

The setting enhanced the experience. A real freight train would occasionally rumble through the gulch below, at least once in sync with images of a woman riding a train. Though visible from several spots, the main view required peering through the mesh of a security fence and overgrown weeds, emphasizing our voyeuristic peek into the characters’ lives. Confusion surrounding the sound delivery system was the only glitch in an otherwise powerful presentation.

From spectacle to subtlety: For “Fireflies,” Stan Woodard created a vision of  insects beaming their bits of lit among the leaves of a tree atop a vacant lot on Walker Street. It was the kind of thing you had to slow down to notice, and talk to the Atlanta artist, who remained nearby, to fully appreciate.

Fireflies are, I learned, like canaries in a coal mine. Their disappearance signals the destruction of natural habitats. Woodard had chosen the site because it was untended and overgrown — atmospheric but also still natural. Ironically, right before the event, the owner cut down all the vegetation, so Woodard had to manufacture the habitat with branches cut from other places, as well as the fireflies. 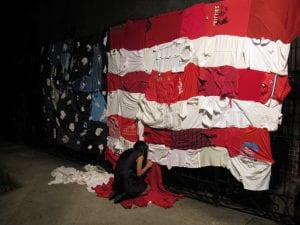 Carolina Rubio MacWright: “We Are All Immigrants Here.” Photo by Catherine Fox.

New York artist Carolina Rubio MacWright handled a combustible political issue, immigration, with grace in “We Are All Immigrants Here.” She reminded the audience that ours is a nation built of immigrants by constructing on site an American flag using articles of clothing contributed by newcomers from many nations. The performance was accompanied by a soundtrack of their stories.

Wit abounded, sometimes for its own sake, but more often as a vehicle for provoking thought. The video “Lima Lives” — a true-life Atlanta story about a runaway circus zebra named Lima and the attendant absurdities of police chasing “Perp 43” (to quote the police dispatcher) — was amusing and cleverly visualized. It also evoked the poignancy of a caged animal’s life, particularly the voice-over about Lima trying to “go home.”

But I wish this piece, created by Ralph Brancaccio and Linda and Ed Calhoun, had been presented as a large projection, instead of on a monitor propped on the doorjamb of a jewelry store, so that more people could have enjoyed it. 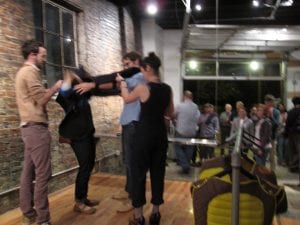 “Sabotage,” Stacy Scibelli’s interactive “tickle machines,” seemed like something you’d find in a boardwalk booth, but it sneakily explored the dynamics of power. The New York artist designed arty costumes that, when donned by a pair of participants, locked their arms to each other’s armpits. They stood in a ring (get it?) to tickle each other. I didn’t participate; just watching the public display of the pleasure/pain made me squirm. 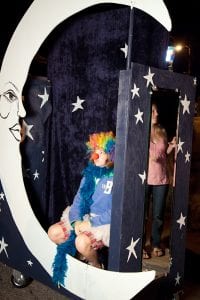 The carnival theme continued in “Traveling Menagerie,” an exuberant performance/interactive play piece by the fabulously costumed members of the Etc. Collective. The Greenboro, N.C., group charmed children and adults alike with their DIY music, dance, story nook and such. The impulse to stop and gather around the troupe made a nice counterpoint to the urge to keep walking.

Adding to the carnie scene was the funhouse sensory disorientation of “Artifact,” Castleberry resident Michael Gibson’s smoke-filled space, and “Diva,” the bodiless opera singer à la Tony Oursler’s talking video-heads, by Atlantans Wes Eastin and Stephani Byrd. Though I loved the absurdity of a high-art Humpty Dumpty (singing Italian opera arias) and the power of the music and the face to almost make us forget it, the piece didn’t top their interactive 2009 project.

“The Garden of Love” and”Sorrow, like Pleasure, Creates Its Own Atmosphere,” former Atlantan Amber Boardman’s visual concerts, accompanied live by flutist Jessica Peek Sherwood, were an enchanting experience. One can only respond with wonderment to the imagination behind the fantastical imagery, visual puns, mix of media and quirky ideas that produced it. (Pierre Ruhe, our classical music critic, reviewed a previous production.)

Some of the projects were one-liners. That was my take on The Art Officials’ autograph booth. Unveiling the two artists’ royal-looking portrait and getting people to line up for their signatures was meant to satirize celebrity. But the joke, and not in a good way, was really on the autograph seekers who were innocent of conceptual-art irony. Likewise, the intentional banality of “Mike Washing a Window,” by the team known as Osborn Brown, defeated its purpose, since the action wouldn’t compel people to watch the piece from start to finish.

Every event has its own personality. FLUX 2010 had a mellow vibe. I missed the energy and excitement that gloATL generated last year, the frisson of dancers animating the streets with their strange movements, but that may have been a one-off.  All in all, this year’s version was a success: well organized (thank you, Flux Projects executive director Anne Dennington), lively and full of good art. Yes, serious fun.