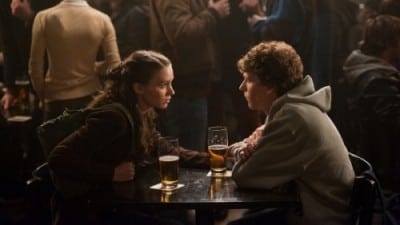 Is real-life Facebook founder Mark Zuckerberg really a relationship-challenged, wardrobe-challenged, ethics-challenged genius-jerk? Well, if he isn’t, “The Social Network” wouldn’t be nearly as fascinating a movie. Based on the book “The Accidental Billionaires,” whose writer never managed to interview Zuckerberg himself, “The Social Network” is structured around not just the story of the creation of the Web phenomenon, but the legal transcripts of the various people who later sued the newly minted billionaire for cutting them out of their share of the Facebook pie.

Jesse Eisenberg (in a scary-snarky, very accomplished performance) plays Mark as a brilliant but socially stunted Harvard student, whose Asperger-like remove from the realm of normal human emotions is spelled out in the first scene: an awkward beer date with his girlfriend Erica (Mara Rooney), in which he manages to say exactly the wrong things to make her dump him on the spot. “Network” positions Erica as Mark’s secret Rosebud, the root cause of all the things, great and petty, that he would later achieve. (Other astute writers have likened her to a Daisy Buchanan to Zuckerberg’s Gatsby.) The Erica setup is probably not based in any real fact, but it makes a terrific dramatic motor that screenwriter Aaron Sorkin exploits for all it’s worth. He also posits many of Zuckerberg’s actions as an ongoing grudge match — against his best friend Eduardo Saverin (Andrew Garfield), who serves as Facebook’s initial chief financial officer and is more socially adept than Mark, and the Winkelvoss twins (Armie Hammer and Josh Pence), moneyed golden athletes who represent everything the geeky, Jewish Mark is not. These guys, as you might guess, are the ones who wind up across the table at the legal depositions that director David Fincher nimbly leaps to and from throughout the film.

The direction and the editing are impressive, but the real power of the movie comes from Sorkin’s script. I mean, think about it: Who ever thought there was a movie to be made about, um, Facebook? But Sorkin, seasoned from so many seasons of “The West Wing” and the author of screenplays including “A Few Good Men” and “The American President,” is one smart writer. His lines snap with wit and anger, and Fincher had the good sense to make his actors rat-a-tat through the dialogue like Rosalind Russell and Cary Grant in “His Girl Friday.” (The strong cast includes a very fine Justin Timberlake as IT wiz and Napster co-founder Sean Parker, the West Coast snake who insinuates himself into Mark and Eduardo’s online Eden.) “The Social Network” is as Shakespearean as it is biblical. It casts Zuckerberg as a Web-savvy Richard III in hoodie and flip-flops, who in many ways represents the allure and dangers of the Internet. We’ve all probably had moments of misunderstanding over emails and instant messages, because words on a screen alone can’t convey anger or sarcasm or any sort of emotional nuance. Things get misinterpreted. (That’s why those annoying emoticons and tonal indicators like “LOL” were invented.) Online or in real life, the film’s Mark Zuckerberg seems unable to decipher (or care) what other people truly mean or how they feel. He sees every interaction as a binary, emotionless exchange. And yet, on some level, he senses what he lacks. He’s the smartest and saddest man in the room. And “The Social Network” is the best movie out there right now.

A technical note: Fincher shoots “The Social Network” with a stygian palette that makes most of the scenes smoke-and-shadow-filled, like a neo-noir. Be sure you check it out at a theater you trust, one that screens films with the proper bulb wattage. Otherwise, it will all be a very dark blur … with some fantastic dialogue.