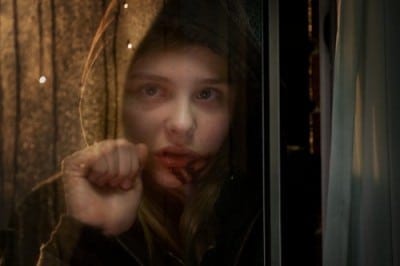 Review: Matt Reeves’ “Let Me In,” a remake, sinks its teeth into vampire craze

Nothing can replace your first love — and that holds true for movies, too. Even though writer-director Matt Reeves’ “Let Me In” is almost startlingly intelligent and mature for an American remake, it can’t stand as a true substitute for Swedish director Tomas Alfredson’s “Let the Right One In” (2008).

That said, from the moment news leaked of plans to remake the strange, stunning original, it seemed almost certain that — to use a vampire metaphor — it would really, really suck. Hollywood doesn’t have a good track record for re-vamping foreign films for the subtitle-challenged. For every decent example (Gore Verbinski’s “The Ring,” say, or Martin Scorsese’s “The Departed”), there are a dozen or more tone-deaf, dumbed-down ones (like “The Vanishing,” “Vanilla Sky” and every J-horror remake that is not “The Ring”). So, surprise, surprise! “Let Me In” is actually worth watching — while still remaining absolutely unnecessary. Set in wintry Los Alamos, N.M., in 1983, the movie introduces us to 12-year-old Owen (the near-translucent, faunlike Kodi Smit-McPhee). His parents are getting divorced, dad has already moved out of their apartment, and if things are tense at home, they’re worse at school. Owen is constantly bullied by classmate Kenny (Dylan Minnette) and a ubiquitous pair of thuggish yes-boys. (The timing of the film’s release is weirdly acute, coming in the immediate wake of suicides by four teenagers around the country who were bullied or humiliated for being gay or being perceived to be.)

It’s no wonder that Owen is open to possible friendship with new next-door neighbor Abby (Chloë Grace Moretz), even though she’s a little strange. She walks in the snow in bare feet, smells funny, and has shouting matches with the older man (Richard Jenkins) she lives with. Owen guesses the guy is her father, but the arguments he hears through his bedroom wall sound like those of an old married couple. Which is very close to the truth. When blood-drained corpses start dotting the winter landscape, it takes Owen a little longer than it does the audience to figure out that, as she puts it, Abby has been 12 “for a very long time.” And the old man isn’t her father, he’s her Renfield. “Let Me In” is less a vampire tale, though, than a study of that state of alienation, fear and occasional flickers of hope that we call pre-adolescence. Director Reeves summons up those dread days with great accuracy. But … so did Alfredson in the original.

“Let Me In” doesn’t achieve the bizarre, echo-chamber effect of watching Gus Van Sant’s shot-by-shot remake of “Psycho.” But if there were an International Filmmakers’ Court for Visual Plagiarism, Swedish director Alfredson would have a good case against Reeves. Well, what’s that old saw about the sincerest form of flattery? You could say that Reeves has good taste and knows what’s worth stealing. The director has claimed that “Let Me In” is based more on the original source novel than on the 2008 film. I’ve read the novel and, trust me, Reeves is flat-out fibbing. (The movie’s coolest, unique scene is shot entirely within a car, and there’s nothing like it in either the book or the first movie.) As the mismatched – or perfectly matched? – Owen and Abby, Smit-McPhee and Moretz are skillful, natural and at times very moving. They’re pros. (He was The Boy in “The Road,” she was the trash-mouthed Hit-Girl in “Kick-Ass.”) But in some ways I prefer the occasional awkwardness of the kids in the original film, who weren’t as polished. Director Alfredson got chills in his movie by having an older actress dub the girl’s voice, and he injected strangeness with visual sleight of hand. Reeves does what most American directors now do. He “solves” his problems with computer-generated imagery. Though he uses a relatively light hand, computer effects now scream “fake” and “unscary” whenever they appear.

Those moments are jarring — and may be a concession to Reeves’ Hollywood overlords. For the most part, “Let Me In” strives to be as somber as its predecessor, if not more so. The two films have exactly the same running time, but “Let Me In” streamlines or eliminates characters and subplots from the first movie, replacing them with what seems like a lot more tween moping and pauses between sentences.

The storyline is moody enough without so much underscoring. We don’t need the multiple references to “Romeo and Juliet,” either; we get the star-crossed lovers thing already (though I guess they’re more sun-crossed). But, to the movie’s credit, it intensifies the moral ambivalence of Owen’s alignment with Abby, forcing us to meditate on what is “right” and “wrong.” Ronald Reagan natters on TV about the existence of good and evil in the world. Jenkins, in his few scenes, conveys the sheer, unending fatigue of his life as Abby’s helpmate. And the change of one character (a neighborhood drunk in the first film) into a decent lawman (Elias Koteas) takes “Let Me In” to a sadder place than “Let the Right One In” did.

Still — and forgive me for saying this — the remake could sometimes use a livelier pulse. Matt Reeves has made a movie that honors the art-house tone of the original. Depending on how it scores (or doesn’t) at the box office, Hollywood may never forgive him for it. Neither may moviegoers, who go in expecting a gory good time only to get an unwanted dose of existential questioning along with their plasma splatters.