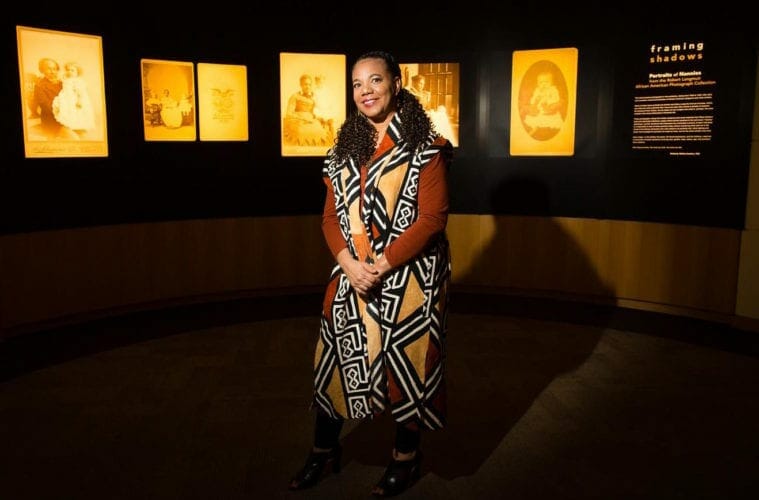 “You honor nannies by using their names when talking about them, paying them well and acknowledging that they are full human beings," says Emory University's Kimberly Wallace-Sanders, who curated the exhibition. (Photo by Stephen Nowland)

Based on some of the most enduring depictions of female African American caregivers and white children in literature, popular culture and advertising, it appears the only thing America loves more than apple pie is a mammy. But if prototypes like Calpurnia from To Kill a Mockingbird and Aibileen from The Help are any indication, the fantasy that such heroines are beloved is unsustainable because it’s impossible to love people we cannot see. Thanks to a pattern of incomplete truths in storytelling, we rarely see the alleged objects of our affection in full.

The exhibition Framing Shadows: Portraits of Nannies From the Robert Langmuir African American Photograph Collection at Emory University — on view through January 5 at the Woodruff Library — tells a different story.

Kimberly Wallace-Sanders, an associate professor of American and African American Studies at Emory, curated the show. She’s also the author of Mammy: A Century of Race, Gender, and Southern Memory (University of Michigan Press, 2008). The 20 or so sepia-toned archival images here, shot from the 1840s to the 1920s, are remarkable for their aesthetic beauty. The composition is clean. The lighting seems calibrated to flatter the adult subjects. And the framing forces viewers to recognize the women’s multidimensional aspects — whether resolute, melancholy, dignified, resigned or proud.

Framing Shadows’ subjects are as fascinating as the Mona Lisa and, arguably, even more enigmatic. These portraits don’t include names, dates and locations, which are largely absent from records of the time.

“Part of my mission is to rescue these women from obscurity,” says Wallace-Sanders. She approximated timelines on what historians call the “orphan photographs” based on the style of portraiture, hairstyles and fashions depicted.

“When you think of the anecdotes surrounding these relationships, it’s always one of undying affection and superlative love,” she says, “almost a supernatural relationship [in which] these women loved the white children more than they loved their biological children. That is an incredible insult to her maternity.” Wallace-Sanders rejects the notion that hearing the same mythology over and over again makes it true. She calls it propaganda. If seeing truly is believing, she says she hopes viewers might reconsider the microcosm of power dynamics reflecting race, gender, class, status and age by taking a closer look at these portraits.

Summer Evans, a producer for WABE-FM’s City Lights With Lois Reitzes, expected warm, fuzzy feelings about the show, but her perspective shifted as she walked the gallery with Wallace-Sanders.

“I came from a place of ignorance of this relationship between the nannies and children,” Evans says. “Because you see portrayals in movies of loving and caring relationships where the nanny just loves the children and sees them more than her own, I thought of it less as a job . . . and projected those ideas. But I didn’t see this sense of warmth. I saw stress and tiredness and a kind of detachment from the child. It was more, ‘This is my job.’ I thought about books and movies written about nannies from a white perspective, but Framing Shadows will change the way I reflect on movies and books in the future.”

Wallace-Sanders lives for reactions like this and says the icing on the cake has been watching visitors pull close, step back and collect themselves while reconciling images of “companion nannies” — little girls whose youth was a bonus to white parents seeking to spare their children the potential trauma of outliving an elderly caregiver. More often than not, in what seems to be an involuntary reflex, viewers’ hands wind up resting on their chests, if not cupping their chins or covering their mouths, in response to seeing this history. Undated photograph of a companion nanny and child

When it comes to upending misconceptions about smiling, happy servants, recognizing their humanity is half the battle. The other half comes from answering questions about what Wallace-Sanders calls the most complex interracial relationships in the nation’s history.

Queries about these caregivers are many. Who were these women? Who took care of their children? Who might they have been under different circumstances? How vulnerable were they to exploitation and abuse by those who enslaved or employed them? Where did they find the capacity to love children who were conditioned to presume their superiority and perpetuate an indefensible hierarchy predicated upon race?

“Employment doesn’t mean there was no closeness,” Wallace-Sanders says. “I’m not saying these African American women were sociopaths who felt nothing for white children. But nobody takes care of somebody else’s children day in and day out and doesn’t have a thought that ‘You are annoying to me. I would rather be someplace else.’

“Anytime money and affection are intertwined, it’s complicated,” she says. “For people who insist otherwise, I say that the relationship was a two-way street and [that] we have only heard from one side — the romanticized version.”

The shadow side to such revisionist history is the kind of magical thinking that persists today, where it’s perfectly acceptable to declare, “My family has/had a wonderful black nanny who loves/loved us unconditionally and is/was just like part of the family.” Wallace-Sanders maintains that reducing a human being to her color and using the language of ownership makes that kind of claim unimpressive, childish and selfish. Saying that a nanny is like a member of the family dishonors her unless you have a habit of paying family members to show up at a particular time and place. In this undated photograph, the nanny appears to have fallen asleep, likely from exhaustion.

“You honor nannies by using their names when talking about them, paying them well and acknowledging that they are full human beings with inner lives that do not involve you,” Wallace-Sanders says. “I don’t want anybody of any race to leave this exhibition, go home and fire anybody. I am in favor of employment. But we must stop replicating mindless stereotypes by thinking and acting differently.”

Shaking things up by encouraging visitors to reconsider old narratives is the driving force behind Wallace-Sanders’ mission as an educator and scholar. She believes that bearing witness is the best defense against ignorance and indifference.

“I will never forget you,” she says of the women featured in Framing Shadows. “I know you have a whole life behind you, and I will be the voice that you don’t have. I will find out about you, tell your story the best way that I possibly can and insist that people recognize you.”