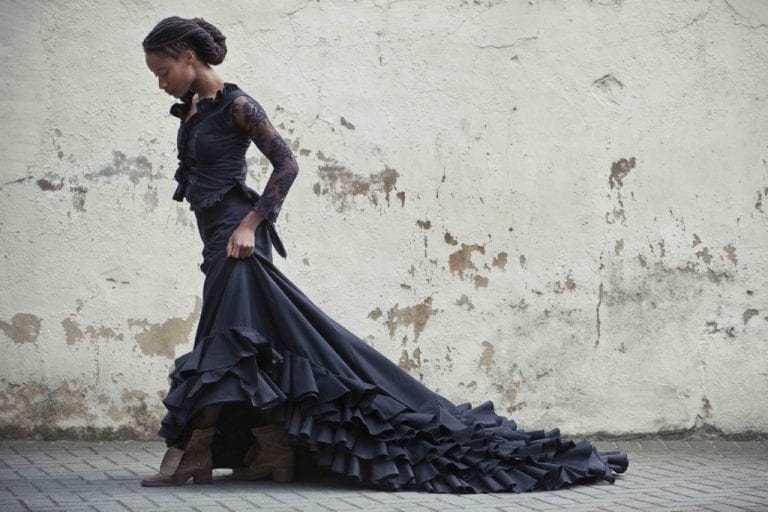 If women in flouncy skirts, black hair slicked into a bun and castanets are the first things that spring to mind when flamenco is mentioned, you are not alone. But the art form that has been synonymous with Gypsy culture since Spain’s romantic period has roots in Africa and its diaspora — a fact that has been overlooked by artists, scholars and devotees of the art form for 200 years. This week, a series of events including a book launch, film screening and live performance will likely shatter stereotypes by expanding awareness of the history of the art form that combines guitar, song, dance and rhythm.

The week-long series will kick off October 29 with a live performance featuring Yinka Esi Graves at the Red Light Café. This will be followed by a screening of Miguel Ángel’s film, Gurumbé – Afro-Andalusian Memories at the University of North Georgia; the launch of Meira Goldberg, Ph.D.’s new book, Sonidos Negros: On the Blackness of Flamenco, at the Rialto Center for the Arts at Georgia State University; and a panel discussion that will focus on slavery in southern Spain, as well as the connection between flamenco and art and music expressions in the Caribbean and South America, at the Auburn Avenue Research Library.

ArtsATL caught up with one of the presenting hosts, Julie Galle Baggenstoss, an Atlanta-based flamenco dancer, teacher and scholar, who serves as executive director of A Través, a cultural exchange initiative created to connect Spanish flamenco artists with Georgians. Baggenstoss talked about the Africanist influences on flamenco, the origin of the word “fandango” and why “bringing salt” is critical to honest expression as a dancer.

ArtsATL: When did you first become aware of the hybridization of flamenco?

Julie Galle Baggenstoss: I used to teach flamenco through the aesthetics of girls in flouncy skirts, but it became more interesting when I went beyond the stereotypes and spoke about the history of the art form. In the places where Spain colonized Africa, African traditions of singing and dancing mixed with local traditions. The prevailing white European colonizers would appropriate the African tradition in the form of some new expression. Invariably, the African roots went unacknowledged. This week, we are looking at what is missing, what was left out and the lost bits of African expression.

ArtsATL: What was left out?

Galle Baggenstoss: You can see evidence of Africanist influence on flamenco from its rhythm, visuals and philosophical ideas. The posture, below-the-waist alignment, percussive footwork and articulation of hands have their origins in the Congo region of Africa. The communication between the dancer and musician and the building of energy we see in flamenco were all ritual practices brought from Africa to Spain by way of the trans-Atlantic slave trade. If nothing else, I hope people will remember that the word “fandango” has its origins in West Africa — not the movie website — and means getting together in a circle to sing, dance, connect spiritually and have a bit of a hell-raising on different planes.

ArtsATL: Who is Yinka Esi Graves, and why are you excited to share her with Atlantans?

Galle Baggenstoss: Yinka is a London-born and Seville-based dancer who is of African descent. She is an electric, exciting, dynamic and emotive dancer within flamenco, and a maverick who will take the dance vocabulary to a new place by recognizing its connection to the African vocabulary. She is captivating, and her lines and aesthetics are beautiful. But beyond beauty, you have to have some salt in flamenco. You have to be willing to be ugly and expose something of yourself in service of expression . . . and Yinka goes there. Next week, she will also teach a flamenco dance class to university students and young children enrolled in an after-school flamenco dance and singing residency at Glennwood Elementary in Decatur!

ArtsATL: Who are the practitioners keeping flamenco alive in Atlanta today?

Galle Baggenstoss: I am in the mix of those keeping flamenco alive here in Atlanta, as is Ania Bartelmus, a professional flamenco dancer and a founder of La Candela Company; Marianela “Malita” Belloso runs Caló Gitano, a flamenco dance company and academy in Alpharetta and Atlanta. Daniel Benitez Perez is a Spanish flamenco/classical guitarist based here. And Martha Sid-Ahmed has been a private teacher in Atlanta since the 1970s.

ArtsATL: You see parallels between flamenco’s lost history and that of Atlanta’s rapidly changing face. What is the connection?

Galle Baggenstoss: I have been listening to people discuss gentrification and the disappearance of Atlanta neighborhoods so stadiums or new developments can be built. There can be so much division in the city over development of the Gulch, or the area around the stadium. Certainly, this loss of history is not only happening in Atlanta, and history does not happen in a silo. But we need people to know the histories of forced displacement. We must acknowledge the ways in which music and art have been informed by the African diaspora in the U.S., as was flamenco in Spain.

For a full schedule of events, visit atravesarts.com.