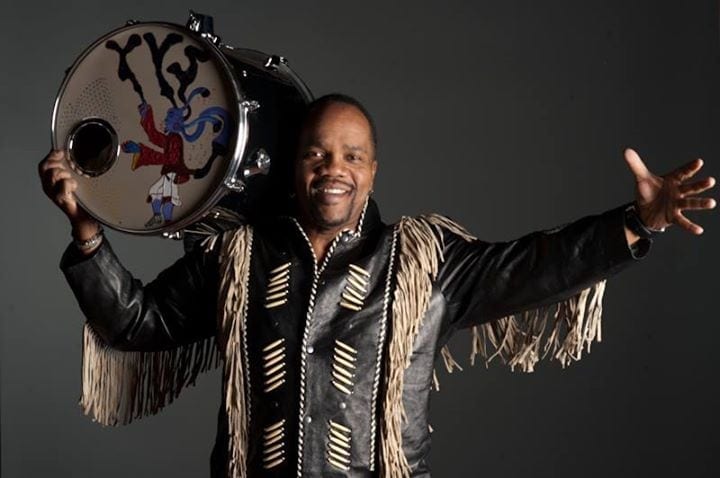 Yonrico Scott, one of Atlanta’s most prominent musicians and an artist known for his long tenure in The Derek Trucks Band, has died at age 63.

His death was announced Friday morning by Blue Canoe Records. “Mr. Scott was a drummer, percussionist, vocalist, visual artist, educator, and a true friend and champion of our label,” the statement said. “The people he touched with his gifts is unmeasurable. His spirit will live on, and we ask that you pray for his family during this difficult time.”

No cause of death was immediately released.

Atlanta jazz/funk guitarist Grant Green Jr. performed often with Scott in recent years. “We lost another great musician and my friend,” Green posted on Facebook. “I am just devastated from the loss of my friend Yonrico Scott. I’m glad I knew you and honored that we were friends, and I will miss my Detroit brother!”

Atlanta bassist Kevin Scott (no relation) also performed extensively with Yonrico Scott. “It’s hard to comprehend that Yonrico Scott has passed away,” Kevin Scott posted on Facebook. “He was such a pillar of the Atlanta music scene for decades. I always considered Rico as a mentor along with many other young musicians coming up. My heart goes out to his family and everyone else that he had an impact on as well.”

Cyril Neville, who played with Scott in the Royal Southern Brotherhood band, posted on Facebook that he was devastated by the loss. “Nothing can stop the pain or the tears!” Neville wrote. “I’m so grateful for the music we made together! We made lots of people happy with our music! Yonrico Scott and Charlie Wooten were the heartbeat of RSB, one of the funkiest rhythm sections I was EVER Blessed to play with!”

Scott moved to Atlanta in 1977. He  joined with Trucks in 1994 when the acclaimed guitarist was still a teenager.

Scott was a classically trained drummer who was born in 1955 and grew up in Detroit. He told ArtsATL’s Brenda Stepp in 2017 that his mother, Ruth Scott, was a gospel singer who was close friends with Sam Cooke and Johnnie Taylor. He grew up friends with the son of legendary Motown bassist James Jamerson, and apprenticed under Motown drummer George Hamilton.

“Everyone in Motown was playing music all the time back then,” Scott said. “I grew up in the time when Motown was at a peak . . . music was just a natural part of my life from as early as I can remember.”

Scott began to play the drums at age five and began his professional career with gospel groups at age seven. By age 11, he was playing church and club dates.

He played football on a scholarship at Kentucky State for two years, then received a music scholarship to the University of Kentucky and transferred there. “I got to play with the philharmonic orchestra and play on Broadway, and it was exactly what I’d been wanting,” he said.

Ironically, the Derek Trucks Band received a Grammy Award for Best Contemporary Blues Album in 2010, months after the group had split. “We knew were disbanding within a few months at the end of 2009 because Derek and Susan were going to start playing together and there wasn’t room for all of us [from both bands],” Scott said. “I spent so many years with Derek and he was so young when we began, that breakup was [tough]. When we started, Derek wasn’t even a teenager, and we all grew with him. We were absolutely a family.”

For two years after that, Scott played in the Royal Southern Brotherhood with Neville, Devon Allman, Charlie Wooten and Mike Zito. He became a painter in recent years, a move sparked when Colonel Bruce Hampton introduced him to folk artist Howard Finster.

“His paintings were so weird and I thought to myself, ‘I could do this,’” Scott said. “One day I started painting a drumhead and [former Allman Brothers Band bassist] Oteil Burbridge saw me doing it and said, ‘How much would you sell me that drumhead for?’ I told him a hundred bucks. He said he’d pay me three hundred. And he did. So, Oteil bought my very first painting. That was the beginning of it.”

Scott said he was influenced by a wide variety of people. “My mom, first — and not just because of the obvious for being my mom — but because she had such an influence on me musically and supported and encouraged me in every way. Patrick Arnold because he was one of my first percussion teachers. Stevie Wonder because playing with him has had such a profoundly positive effect on me. Jacob Lawrence, who is an African American folk artist, because his art has greatly influenced my painting. And, I’d also have to include Bruce [Colonel Bruce Hampton] because, you know, Bruce really does this thing from the heart. He’s not looking to be big, he just wants to gig. The dude is hanging in there. He and I are buddies.”

Scott is survived by children Rico Scott and Krista Scott.

When asked in 2017 about how he wanted to be remembered, Scott was succinct. “First and foremost, as a good father to my two great kids,” he said. “And then, as a good guy who had a lot of energy and passion for whatever I did and whose music somehow left a mark.”