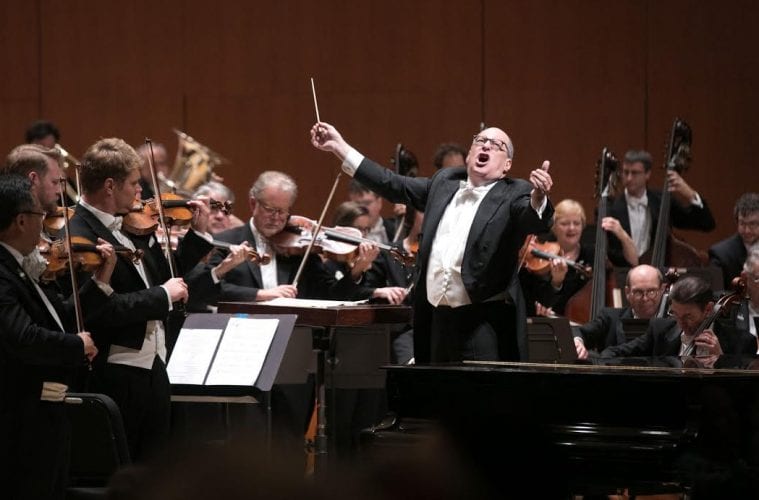 Spano will step down as the leader of the Atlanta Symphony Orchestra at the end of the next season. (Photo by Jeff Roffman)

The Atlanta Symphony Orchestra stands at a crossroads in 2019–20. After a two-year-long survey of Beethoven and Bernstein that commemorated Bernstein’s centennial and his love for Beethoven, the ASO is returning to a more conservative, late-romantic lineup.

With Robert Spano stepping down in the spring of 2021, marking 20 full seasons in the post of music director, the ASO has begun the process of finding his long-term replacement. Their search committee is traveling to hear conductors and finding out which person has the right fundraising abilities, conducting technique and rapport with players to be the public face of the ASO — and perhaps the most visible arts leader in Atlanta.

In this upcoming season, we will be seeing a number of marketable younger conductors, including James Gaffigan, Thomas Søndergård, Mark Wigglesworth and Nicola Luisotti. Among these, I am surprised that Søndergård is being given another chance, seeing as his interpretation of Beethoven’s Ninth Symphony in April was condemned as too fast by critics and, sotto voce, by ASO personnel. With the search slowly gearing up, more conventional repertoire allows for an easier evaluation of conductors while limiting costs such as composer commissions.

Who might emerge as the next music director? Both American and European conductors are being considered. Although overdue, women and minority conductors are also receiving a look, such as Karina Canellakis conducting the ASO in late January–early February.

In addition, the long-term direction of the ASO is open. Spano championed the commissioning and performance of contemporary works in his proclamation of an “Atlanta School” of composers. The focus of the future director may be completely different. Regardless of the incoming director’s interests, the ASO needs to snag a talented conductor before another orchestra hires him, or her. Several U.S. orchestras are searching for music directors, such as the Minnesota Orchestra, with its highly regarded outgoing leader, Osmo Vänskä. For this season, we will see Spano in his regular rotation, along with Principal Guest Conductor Donald Runnicles, Assistant Conductor Stephen Mulligan and Chorus Director Norman Mackenzie two to four times each, and prospective music directors sprinkled in between.

— Joshua Bell will take a break from his conducting and concertmaster duties at the Academy of St. Martin in the Fields to open the season with Spano at the podium September 20–22. He will perform two late-romantic warhorses: Wieniawski’s Second Violin Concerto and Sarasate’s Zigeunerweisen, both of which come close to being catalogs of virtuosic violin techniques. The rest of the concert will feature Wagner’s Prelude to Die Meistersinger, and Jennifer Higdon’s Concerto for Orchestra. Higdon’s music has an intuitive, rhythmic and often neoromantic style and tends to add gestures together in time, accumulating toward climaxes.

— The ASO will be joined by the ASO Chorus, the Gwinnett Young Singers, the Morehouse College and Spelman College glee clubs and a roster of eight top-flight vocal soloists November 14 and 16 in Mahler’s Eighth Symphony, the “Symphony of a Thousand.” Among the soloists, bassist Morris Robinson is not to be missed; he delighted in last spring’s “Fidelio” with a powerful, stentorian approach to Don Fernando, the king’s minister. This monumental symphony, sometimes compared with Beethoven’s Ninth, will uplift audiences with its message of redemptive love. The concerts will be recorded on the ASO’s label, ASO Media. — The eminent pianist and Grammy award winner Emanuel Ax stars in Brahms’s First Piano Concerto November 21 and 23. Ax has a great depth of experience in performing this work. He previously recorded it with the Chicago Symphony and Amsterdam’s Royal Concertgebouw orchestras. Rounding out the evening will be world premieres of a new unannounced composition by Brian Nabors and Richard Prior’s Fourth Symphony. Nabors is the 2019 winner of the Rapido! National Composition Contest and is known for his fusion of classical, jazz and funk styles. Prior is well known to Atlanta audiences for a vivid, neoromantic orchestral style. Until last month, he was Emory University’s director of orchestral studies but has since resigned. According to the Atlanta Journal-Constitution, Emory will not comment on the reasons for Prior’s abrupt departure.

— In its traditional holiday-season events, the ASO’s official Christmas program is December 6–8, with Mackenzie conducting, with contributions made by the ASO Chorus, the Morehouse College Glee Club and the Gwinnett Young Singers. This program continues a tradition started by beloved music director Robert Shaw (1967–1988): it contains performances of carols and hymns. On December 12–13, Norman Mackenzie, the ASO and the ASO Chamber Chorus will perform excerpts from Handel’s Messiah in its traditional liturgical context, Advent. The ASO performance will be competing with many other performances throughout Georgia and the United States. Perhaps the ASO should return to the practice of the work’s premiere in Dublin, Ireland, in 1742 and use the performance to raise money for charity? (It is no longer necessary to ask gentlemen to leave their swords by the door.) And on December 15, a family holiday concert entitled “A Flicker of Light on a Winter’s Night” will be conducted by Mulligan and will feature the Platypus Theatre, a Canadian theater troupe that weaves together puppets, costumes and music into a story line that is accessible to young children. This will be the ASO’s first collaboration on this particular Platypus program, following the Nashville and San Antonio Symphony orchestras.

— On March 11, for a single night only, violinist Itzhak Perlman and conductor Yoel Levi team up to present Bruch’s First Violin Concerto, along with Mahler’s First Symphony. Levi was the ASO music director from 1988 to 2000. Perlman, the winner of the Presidential Medal of Freedom in 2015, is a classical music superstar with a Grammy Lifetime Achievement Award. He recorded the work all the way back in 1977, and this passionate piece has been a favorite of his throughout his many years of touring. Listeners can expect an iconic performance with unparalleled expressive range and sensitivity. — André Watts headlines in Beethoven’s Fifth Piano Concerto, with Spano conducting, March 19 and 21. Beethoven’s Seventh Symphony rounds out the program. Watts is well-known as a romantic-music specialist, for his theatrical and powerful, but disciplined, approach to the piano. Watts first achieved fame in a Young People’s Concert in 1963 with Leonard Bernstein at the podium, where he soloed in Liszt’s First Piano Concerto. You can find a recent YouTube video in which Watts discusses the Beethoven Emperor Concerto here.

— An all-star cast of vocalists and the ASO Chorus will join the ASO in a concert version of Beethoven’s Missa Solemnis March 26–27, after they have performed the same work at Carnegie Hall. The soprano soloist, Susanna Phillips, is a lyric soprano from Alabama who has sung at the Met for 11 consecutive seasons. The mezzo-soprano, Sasha Cooke, is an established soloist with the world’s major orchestras. Benjamin Bliss is an American tenor who has an upcoming house debut with the Lyric Opera of Chicago. Matthew Rose is a British bass who has performed extensively in operatic and oratorio repertoires.

— Violinist Midori and conductor Nicholas Carter join the ASO in Bartók’s Second Violin Concerto April 16 and 18. Midori is world-famous and surprisingly young, born in 1971, for such an extensive career. While she is a violin virtuoso of the highest caliber, listeners may not be aware of her extensive educational and humanitarian endeavors. Over many years, she has promoted peaceful coexistence between people using the common language of music, leading to her being named a United Nations Messenger of Peace in 2007. Carter is a fast-rising conductor from Australia who worked extensively alongside the ASO’s Donald Runnicles at the Deutsche Oper Berlin in 2014–16. The remainder of the program will include Haydn’s underappreciated “Trauersinfonie,” a good example of Haydn’s “Storm and Stress” period, and Prokoviev’s Fifth Symphony, written during the last years of World War II and intended to exalt the ideal of freedom. Midori is one of the few soloists capable of drawing on name recognition alone. (Photo by Timothy Greenfield-Sanders)

— The ASO, ASO Chorus, Gwinett Young Singers and three soloists will present Carl Orff’s Carmina Burana April 23–25. This scenic cantata, based on medieval poetry, addresses a vivid succession of topics such as the ephemeral nature of life, the return of spring, drinking and gambling. The first movement, “O Fortuna,” has been used excessively in countless advertisements, movies and TV shows — for instance, in the trailer for Paul Blart: Mall Cop! In the ASO’s performance, conducted by Runnicles, we will hear from soloists including Puerto-Rican soprano Meechot Marrero, American tenor Andrew Bidlack and American baritone Stephen Powell. All soloists will be challenged by the uncommonly high vocal range of many arias, such as the “Olim lacus colueram” — or the suffering of a roasting swan — sung by a tenor in falsetto, or male head voice.

— On June 11, 13 and 14, the ASO will perform each day an act from Wagner’s almost four-hour-long opera Tristan und Isolde, creating a multi-day festival. Season-ticket holders to one of the ASO’s packages should note that they will need to purchase an additional concert but that the ASO will give a 25 percent discount. This entire work is an ASO premiere. In the mid-19th century, this piece foreshadowed the progression of Western art music toward increasing dissonance, all the way to Schoenberg’s experiments with atonality starting in 1908. Watch out for New Zealander heldentenor Simon O’Neill as Tristan, the American full lyric soprano Tamara Wilson as Isolde, and Georgia native Jamie Barton singing the role of Brangäna. Barton is the 2015 recipient of the Richard Tucker Award, a prize given to deserving American opera singers. Throughout, the singers will have to display tremendous endurance. We can look forward to the ASO’s imaginative concert staging that will be needed to make this work come alive in the Woodruff Arts Center.