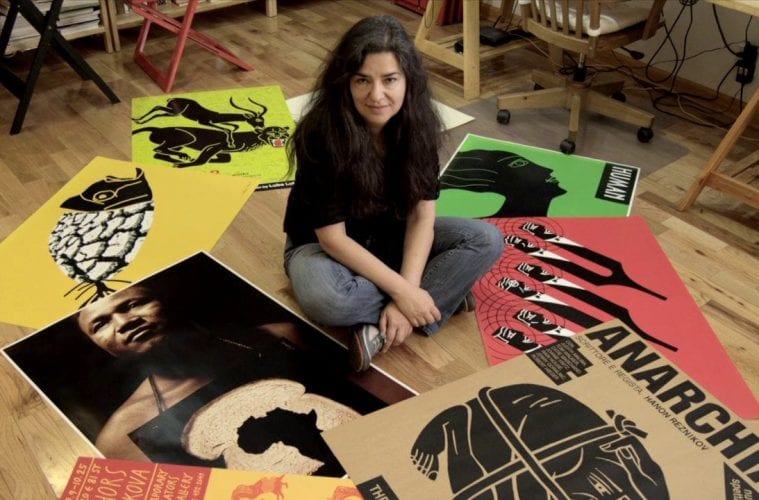 Design as a catalyst for change: Luba Lukova comes to MODA for “Designing Justice”

An anticipated and politically relevant exhibition, Luba Lukova: Designing Justice, will open at The Museum of Design Atlanta on June 4, following a private viewing on June 3.

Luba Lukova is a catalyst for change. She’s a designer and artist who uses her talent to develop thoughtful work that champions social justice. And she’s effective — her stark illustrations have been internationally recognized and collected by UNESCO, MoMA, The Library of Congress, Bibliotheque nationale de France and many others. The key is in her simplicity: by keeping to a visual direction of contrasting line work with only one or two colors, her work candidly portrays simple messages of humanity.

Yet somehow, with all of this success, the exhibition at MODA will be the first full exhibit dedicated to her entire catalog at a museum. Curated by herself, accompanied by quotes from Laura Flusche and exhibit design by Susan Sanders, the exhibition will feature 60 large-scale posters (original prints) of selected pieces from her archives. With each poster being displayed at 30” x 40”, the vibrancy and context of every artwork will be an incredible chance for patrons to reflect and empathize with causes seen and unseen around the globe.

One of Lukova’s most heralded designs.

Lukova’s style is intriguingly born from a combination of a background in theater and book publishing intertwined with a passion for social causes. Born in communist Bulgaria, she immigrated to the United States in 1991 at an invitation to the Colorado Poster Biennial and began work with the New York Times shortly after. From there she launched her studio and has been a leading voice in powerful visual metaphor for numerous global causes. This exhibition features many — now iconic — pieces of illustration that became emblematic of several movements. Notable to this designer is her Peace poster. Featuring a dove made from different weapons of war, it was widely influential throughout the Iraq War. Also featured are well-known illustrations Chernobyl, Fukushima… (energy dangers), Ecology (environmental causes), Say It Loud (censorship), Pride March (from the 2016 NYC Pride celebration) and Sudan (hunger).

But of course, the effectiveness of Lukova’s work is in its prompt for action. Thoughtfully, the exhibit will be accompanied by two interactive experiences for patrons to learn more about social justice work. One side of the main gallery will house an educational area on empathy, including simple steps to combat injustice in their communities. Another area will allow visitors to create their own socially minded protest posters in the style of Luba.

Laura Flusche, executive director of MODA, explains that people can merely view these posters and leave ready to protest/express their views publicly, but what they should really get out of this exhibition is the need for empathy. “You can march for your beliefs as a first step, but learning to start those hard conversations from this work is what’s most important. No, you won’t change someone’s mind right away, but you will facilitate that change for them to broaden their minds and build empathy themselves.”

Laura also says that what makes this exhibit special is that no one designs like Luba, and that her style is what gives her work a large following alongside the causes they stand behind. Flusche, who holds a PhD in ancient arts, observes very large connections to Greek vase painting, ancient theater and just a little Picasso in Luba’s work. She explains that because of this study of classical work, Lukova stands apart in the arena of protest/social justice art and draws us back to images that first entertained us thousands of years ago. Flusche adds that it’s also an incredible feat for such complicated issues to be effectively condensed down into the format of a poster.

A few weeks after the opening, Luba will return to Atlanta for a lecture in MODA’s acclaimed Design Conversation series on June 21 with a reception to follow.

As a designer who has spent a chunk of their career working on behalf of social justice issues, I believe this work will be a wonderfully timed opportunity for Atlanta, especially in a political climate with as many threats to our creative institutions abound. Viewing this show should be a reminder to everyone that we should not be afraid to speak out, and the powers that be are made so because of the everyday people who grant them trust.

The exhibition Luba Lukova: Designing Justice will be up at MODA throughout the summer and ends September 3.