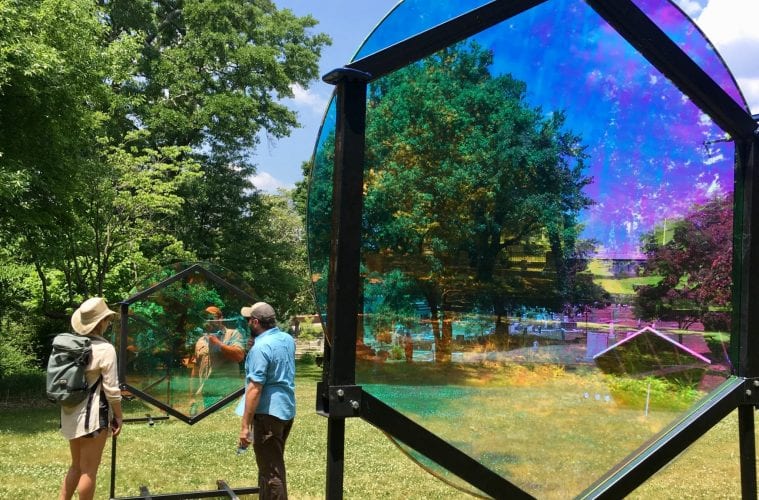 Dashboard prepares for its “Golden Hour” at Oakland Cemetery

More than any other place, Oakland Cemetery reveals a comprehensive narrative of Atlanta’s history since the city’s founding. Even so, as a holding place for the dead, the cemetery is not a place we typically think to visit when we’re seeking to learn about or engage with the city’s present. Oakland Cemetery’s first outdoor exhibition of art installations opening May 19 aims to change that.

The exhibition is a partnership between Historic Oakland Foundation and Dashboard, an Atlanta-based creative agency that produces shows nationwide. After being approached by Oakland, Dashboard cofounders Courtney Hammond and Beth Malone contacted New York-based curator Oshun Layne. The name she chose for the exhibition, Golden Hour, comes from Golden Time of Day, a song by Maze featuring Frankie Beverly from their 1978 album of the same name. “I always tell people, if there’s one song I want played at my funeral: no Amazing Grace,” says Layne. “I want Golden Time of Day.”

And that’s the direction she took when thinking about Oakland as a larger engagement with history and self. The show is multifaceted in that some of the 11 participating artists chose to concentrate on the historical relevance of the cemetery while others decided to focus on the self-reflective mood the cemetery evokes. As the lyrics of the song have it: “People, let me tell you, there’s a time in your life when you find who you are. That’s the golden time of day.” Layne believes there is something profound about both experiencing death and entering into life. “How do you heal from it?” she asks. “How do you talk about it?”

Like Oakland’s annual art shows that have recently been incorporated into its programming, installations like those in Golden Hour have the potential to bring new audiences into the space. Whereas historical landmarks have the tendency to become rigid in the minds of locals, Golden Hour shows that historical markers such as monuments and graves are not static in nature, but their significance moves in tandem with sociopolitical change.

Take for example Justin Rabideau’s Searching Our Foundation Like Tangled Roots, a sculpture that encourages viewers to examine their own relationships with past generations. The piece is constructed of towers that each hold plexiglass houses in various architectural styles found around Atlanta. The towers also contain hand-blown glass objects that contain materials such as Georgia clay, pecans, indigo seeds, rice and shards of building materials, all specific to the Southern region. As an exploration of race and space, Rabideau’s piece is timely in forcing viewers to examine the housing and commercial development that is changing neighborhoods directly outside of Oakland in contrast to those generations of Southerners whose labor built and sustained the city’s and the nation’s economy by being forced to harvest cash crops. By employing a seed, sand and a bent nail as roots, Rabideau constructs a monument honoring the generations who came before us.

There’s a tendency in American culture to consider the South as a distinct region with its own culture, problems and way of life. Where there is some truth to this, it must not be forgotten that the South and its history are part of an American culture that abides by no state-line boundaries. Dashboard purposefully included New York-based artists in the show who had previously not lived in Atlanta in order to generate a different perspective on the cemetery. Ruth Stanford, From the Ground Up

For the past several years, Eto Otitgbe of Brooklyn, New York, has been producing work that examines our relationships to public memorials. His piece, Near Future, is in dialogue with Oakland’s Confederate Memorial Obelisk. He recontextualizes the obelisk by constructing another that appears toppled. Large black panels made of valchromat form the base of the installation with the words “forced expelled” engraved on them. They are accompanied by glass picket signs that serve as gravestones. Near Future suggests an alternative future for the memorial in which liberation for all supersedes authoritarianism and white supremacy.

As much as the show confronts difficult histories, Layne is also invested in exploring the mutable space between life and death. She wants to show how cemeteries like Oakland are just as personal and intimate as they are public and historical. Though she’s lived in Atlanta for nearly two decades, InKyoung Chun had not spent time in Oakland. After being invited to contribute to the show, she visited the cemetery and immediately noticed the tension between the large presence of Confederate memorialization and the African Americans who were exhumed and reburied when the city ordered that cemeteries too were to be racially segregated. Even so, Chun’s Blue Gate is about the personal process of passing through a hidden space in order to gain energies for life. Rather than a gate, the piece is made of blue neon lights that outline the shape of a house. The color and feel of the sculpture symbolizes water that is an essential source for all living things. Walking through this gate exemplifies cleansing and reenergizing our lives — two things we often take for granted when walking so close to the dead.

Another installation that visitors are encouraged to enter is Karen Tauches’ Dead Letters, a walk-through post office inspired by the commercial buildings and empty lots on the rapidly changing Memorial Drive nearby. With walls made of clear plastic and one side consisting of a sign viewable from both inside and out, visitors can mail a letter or communicate to someone on the other side of life.

Atlantans are welcome to experience these works and others during opening night’s “Golden Hour” on May 19 from 6:30 p.m. to 10:30 p.m. In addition to touring the grounds after dark, guests get the special opportunity to engage with these pieces as the sun sets at 8:34 p.m. Featuring performances by DJ Cozy Shawn, Florista, and cellist Okorie Johnson, the event will also include local food trucks and bars.

With a host of programming throughout the exhibition’s tenure that includes a guided curator’s tour and a photography workshop, Golden Hour promises a unique experience to Oakland visitors. It focuses on the cycles of life and death that make it almost impossible to locate where one starts and the other begins. As Layne recognizes that we as people are constantly changing, in this eloquently curated show she acknowledges that our connections to cemeteries like Oakland are also included in that shifting space that we call life.