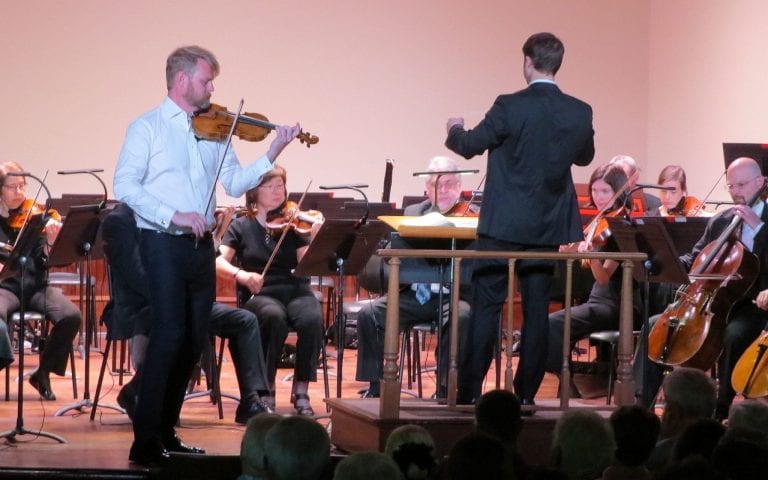 On Sunday’s sunny afternoon, the Atlanta Symphony Orchestra, led by assistant conductor Stephen Mulligan, with ASO associate concertmaster Justin Bruns as violin soloist, performed a concert of music by Rossini, Vivaldi and Mendelssohn at the Madison-Morgan Cultural Center in Madison, Georgia — one half of the ASO, that is, as the other half has been engaged in performances of Leonard Bernstein’s Candide in collaboration with the Alliance Theatre at Symphony Hall since last Wednesday. As much space as the ASO takes up onstage there, it is not the orchestra’s full complement of strings and winds under Spano’s baton.

So what was the rest of the orchestra to do in the meantime, one might ask? The answer: perform an attractive set of Italian-themed community run-out concerts with Mulligan at the helm. The first of these was scheduled as a free, open-air affair at the amphitheater in Atlanta’s in-town Historic Fourth Ward Park. That one was originally going to be the subject of this review, but an army of dark clouds rolled in across the sky in the hour or so before the concert was to start. It was canceled just minutes before the orchestra was to kick off the performance for the sizable crowd, which had overflowed the amphitheater and was still arriving at the time of cancellation. ASO executive director Jennifer Barlament promised the disappointed teeming hordes that the orchestra would reschedule an appearance in Fourth Ward Park, which they greeted with cheers.

In the interim, the program was repeated on Friday at Morehouse College’s excellent 550-seat Ray Charles Performing Arts Center and again on Saturday at the inimitable 392-seat Spivey Hall. This run-out series brought the orchestra to Madison for Mother’s Day, but that’s not the last of them: the program will be repeated again this coming Sunday afternoon at the University of Georgia’s 1,100-seat Hugh Hodgson Concert Hall. So if you missed it in any of these previous venues, there’s still a chance to catch this program. And if you can, by all means do. Based on the performance in Madison, you will find it well worth the drive to Athens.

Mulligan and the ASO opened Sunday’s concert with the Overture to Gioachino Rossini’s opera, L’italiana in Algeri. The opera as a whole was Rossini’s first smash hit when it premiered at the Teatro San Benedetto, Venice, in 1813, when the composer was just 21 years old. The eight-minute Overture, easily recognized by its quiet pizzicato opening in the strings followed by a “surprise” full orchestra outburst chord in bar eight, draws ample themes from the body of the opera – something atypical of Rossini. It has been as much a favorite of orchestral repertoire as the opera has been for the stage. Like Rossini’s overtures in general, it makes for a reliable curtain-raiser for a concert such as this one, and Mulligan and the ASO gave it an engaging performance.

Then came the highlight of the program, as Justin Bruns took the stage as soloist for that most popular musical edifice of the Italian Baroque, Antonio Vivaldi’s Le quattro stagioni (The Four Seasons), a set of four brief concertos for violin and string orchestra, which give musical expression to the seasons of the year in the countryside around Mantua, Italy, offered up in the order of Spring, Summer, Autumn, Winter. While it would be easy for the performers to walk through such a familiar work, that was hardly the case. This was, though unanticipated, the most energized and compelling performance of The Four Seasons I have heard live, an opinion corroborated by other experienced listeners present.

Bruns and the orchestra were hot, in tight ensemble. Summer especially sizzled, but the entire work made its mark on the the listener: an ebullient Spring, a buoyant, rustic-hued Autumn and a biting, quick-paced Winter with an especially urgent first movement; if any negative, perhaps the sheer velocity may be said to defy the marking “Allegro non molto.” Nevertheless, Bruns’ solo part was breathtaking, while Mulligan and the orchestra were fully in sync. Kudos also to ASO assistant principal cellist Karen Freer, sitting in the principal’s chair for these concerts, in her astute underscoring of Bruns’ solo passages with the bass line of the continuo part. Most fortunate was that, unlike the windy outdoors that would have been in Fourth Ward Park, the Cultural Center’s auditorium allowed delivery of the music with a surprising clarity and presence, which was, by the way, true for the whole concert.

After intermission, the concert was rounded out with a non-Italian composer’s symphonic take on the country, Mendelssohn’s Symphony No. 4 in A Major, Op. 90 (nicknamed, naturally, “Italian”). Mulligan and the ASO gave it a forthright, vibrant rendering. Mulligan clearly gets the wise notion of taking the first movement in one beat to the bar, instead of sawing away at the 6/8 meter with two beats to the bar. His tempo rode right on the edge of keeping that smoother, more sunny feeling intact, versus letting it fall back into the more common, somewhat stodgy manner of playing it, which can easily bog it down. But he could, advisably, also take that same approach at a faster tempo, which would unleash an even sunnier, cheerful quality without feeling rushed. Even so, the performance of this Mendelssohn symphony felt solid and refreshing, a fine cap to this delightful, well-played afternoon musical excursion.