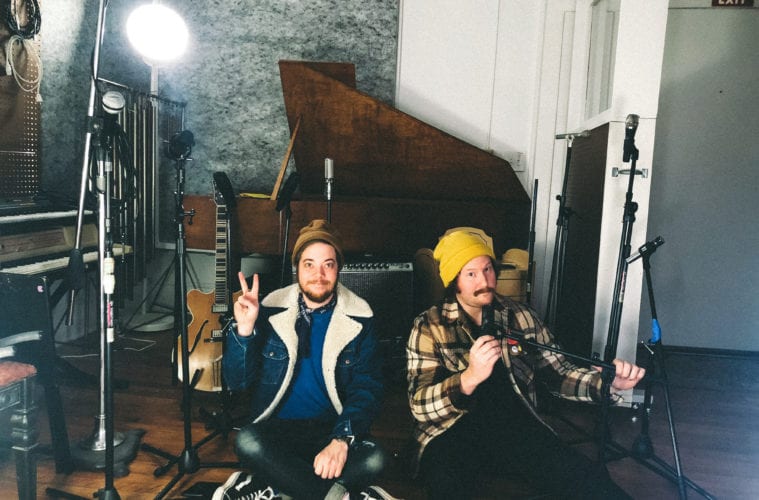 Standard Selects goes from the studio to the stage this Saturday at 529. (Courtesy of Standard Electric Recorders Co.)

Chandler Galloway and Damon Moon have quietly produced some of Atlanta’s most talked about music from a yellow bungalow off Memorial Drive. Standard Electric Recorders Co. officially opened in January 2017, though Galloway and Moon have been in the music and recording game much longer. The duo currently produces a series called Standard Selects, which gives listeners a sneak peek at some of the artists they work with.

These one-take videos are compelling in that they preserve authentic moments of musicians letting loose after a focused tracking session in the warm, tasteful lens of Galloway’s eye and a VHS camera. Galloway and Moon decided it was time to take the experiment out of the studio and on to the stage with a live show at 529 on Saturday.

Galloway and Moon pride themselves on creating an atmosphere of collective exploration, which has many local bands lining up to discuss their projects. Moon is a well-respected engineer and producer, and Galloway works in musical textures and arrangements and brings visual components to outgoing works.

ARTS ATL recently caught up with the two creators for a conversation about collaboration, connection and community.

ARTS ATL: Tell me about the Standard Method.

Chandler Galloway: The Standard Method is a model that we came up with in the early stages of developing the ethos of what Standard Electric Recording Co. would represent and how it would function best for us and the artists coming in to work with us. The idea wasn’t to limit ourselves or the artists to work within certain constraints, but rather to ask questions along the way of the creative process. We intended for these questions to serve as outlines with the content being filled in during the process. One other important thing we wanted to emphasize with the Standard Method was that the flexible questions could be answered in unexpected ways and from different viewpoints, such as by the artist or by the listener. We talk a lot about how our ultimate goal is to help the artist create the best version of whatever it is they’re trying to create, and we consider ourselves akin to sherpas to guide that process.

Damon Moon: It’s kind of our own little manifesto. It’s a guide to a workflow that we’ve sort of stumbled upon and believe that if you follow it, it’s pretty hard to be disappointed with the results. We believe that in the process of creating art, four points should be considered at all times: is something honest, timeless, challenging and relevant? If you can say yes to all of that, you’re probably on to something pretty satisfying. We honestly want to make good records. We’re not in this for the spoils, and we’re certainly not in this for our health. Music is power, and we need it now more than ever. “Music is power, and we need it now more than ever.” — Damon Moon (Courtesy of Standard Electric Recorders Co.)

ARTS ATL: Give us a little background on the Standard Selects and the showcase happening at 529 this Saturday?

Moon: A lot of the time the Standard sessions happen in the evenings, after normal sessions have wrapped up and everyone is pretty laid back and loose from the long day. It’s really nice because they’re low pressure, and by the end of the session, it feels like you just had a great hang with some new friends. So far, all the bands have been really into the whole experience, which feels really good for us. It’s nice to be able to give a little something back. We’ve naturally ended up with a really great community of musicians and artists who might not necessarily know each other otherwise. Of course I might be partial, but I feel like these are some of the best artists we know, and we’re hoping to show them off to Atlanta, as well as to each other.

Galloway: I’ve had a ton of fun working on artwork and playing on records, but really the Standard Selects are becoming some of the most fun things we work on. When we first came up with the idea of doing the Standard Selects sessions, we just wanted to put something out that showed off local music that we liked — we wanted to focus on showing how diverse and talented Atlanta actually is.

By doing our first live showcase with these bands, we hope people will meet that might not normally meet, becoming friends in the process. In order to have a really strong music and arts scene, it’s important for everyone to know each other and be exposed to a bigger picture — more than just the people they might naturally find themselves associating with — so hopefully this show will be helpful in achieving that goal.

ARTS ATL: The personalities of Standard Electric and 529 seem to match well. How did that relationship come together?

Moon: I think as younger folks we feel like we cut our teeth in the Atlanta music scene at 529 by playing in bands and going to shows there. In many ways, it still feels like we’re cutting our teeth over at Standard — 529 feels like where the working band plays, and so does Standard Electric.

Galloway: We both grew up playing or going to shows at 529, so it’s kind of a de facto place for us to do this showcase. They’ve always been a joy to work with and are very democratic in the sense that we hope we are. You can see a band play their first show there one night and then see your idol play the same stage the next night. They’re quintessential to Atlanta and a home base for so many scenes. “Ultimately, I don’t think they have to be the same thing in headphones and live to both be as equally impactful in different ways.” — Chandler Galloway (Courtesy of Standard Electric Recorders Co.)

ARTS ATL: Live performances and engineered records are often different characters in the same story. How do you work with artists to balance the two?

Galloway: I always like to say that a record and a live performance (almost) don’t even have to coordinate in order to be good. The studio is the biggest instrument of them all, so why not play that when you have the chance. I always enjoy seeing a band develop a creative solution to something that is very complex-sounding on a record.

If a song is a good song, it doesn’t necessarily need all of the studio tricks to make it work live. Of course, my favorite things do happen in the studio. We would never have people listening to these amazing songs without the layers and the emotional atmosphere that the studio creates. Ultimately, I don’t think they have to be the same thing in headphones and live to both be as equally impactful in different ways.

Moon: We have an idea we throw around sometimes: the record is a painting, and the live show is a Polaroid of the same painting. Sometimes a band wants to only capture the visceral thing that happens on stage. I think there’s totally a place for that, but a lot of the time we try to push the group to think of the record as something more open-ended. I love it when making a record is a discovering process for a band — finding a deeper identity that’s always been there but never fully tapped into, not just laying down the parts they play every night on the road.

ARTS ATL: Give me the first thing you think about for each of the bands performing at this Saturday’s show — no filter. First, Chick Wallace?

Galloway: Falling over in a tangle of cables but not stopping the take cause it’s just got that vibe, man.

Galloway: Laying down with a pizza pie.

Galloway: Staying up too late yelling about politics, but like, it’s cool.

Galloway: An alien race that came to show us how to more efficiently utilize all of our limbs.