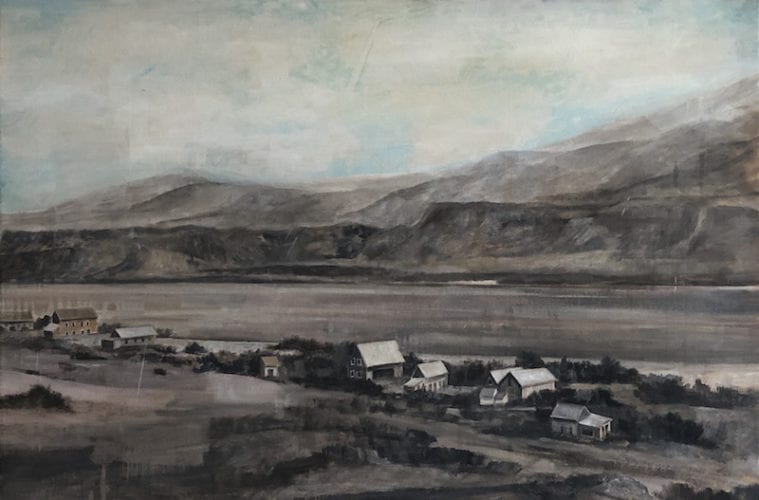 Tom Judd's "Settlement #2" (2018) is oil on canvas measuring 40 x 60 inches. See his work, which looks at the push and pull of the human condition and weather, through March 4 at Sandler Hudson Gallery.

Jerry Cullum’s Notebook is a monthly survey that highlights some of the more notable art + design happenings in metro Atlanta. Cullum has written about art + design in Atlanta, and beyond, for decades.

The paintings in Tom Judd’s Settlement, through March 4 at Sandler Hudson Gallery, present the evolution of the human condition in confrontation with the uncertainties of weather. The key paintings borrow images from 19th-century photographs to show the vulnerability of towns built on flat tornado-prone territory or perilously close to rivers.

A sequence of smaller paintings shows present-day houses being swept away by floods of unprecedented intensity and dimensions and/or the ruins of vacation houses destroyed by coastal hurricanes. This isn’t meant as climate-change messaging (one painting shows an isolated farmhouse on fire without benefit of environmental catastrophe), but the cumulative impression is that while pioneering settlers anticipated challenges, recent alterations in weather patterns have exceeded their inheritors’ worst expectations.

This exhibit dovetails nicely with the recent Apocalypse Simulacra at Spalding Nix Fine Art and Anthropocene at Swan Coach House Gallery. Many consider the Anthropocene a new geological epoch that sees how human activity has taken a dominant role in setting larger natural forces in motion. Its status as “epoch,” however, is still in contention.

Josh Dorman’s bravura exhibition Higher Ground — curated by Georgia State University printmaking faculty member Stephanie Kolpy — raises the stakes on all levels. It may, in fact, suffer from its combination of technical skill and breadth of vision. See it through March 13 at GSU’s Ernest G. Welch School Galleries.

The 4-foot-square How This Will End, for example, appears to be nothing less than an immense allegorical collage depicting the evolution of life out of the oceans, the rise of civilizations mostly devoted to warfare with neighbors and within themselves, and the eventual collapse of civilization back into rising waters. It’s an accomplishment reminiscent of the greatest Renaissance masters in terms of complexity and scope, but it requires a visual familiarity with biology, anthropology and art history for full comprehension, or an immense key to important moments. 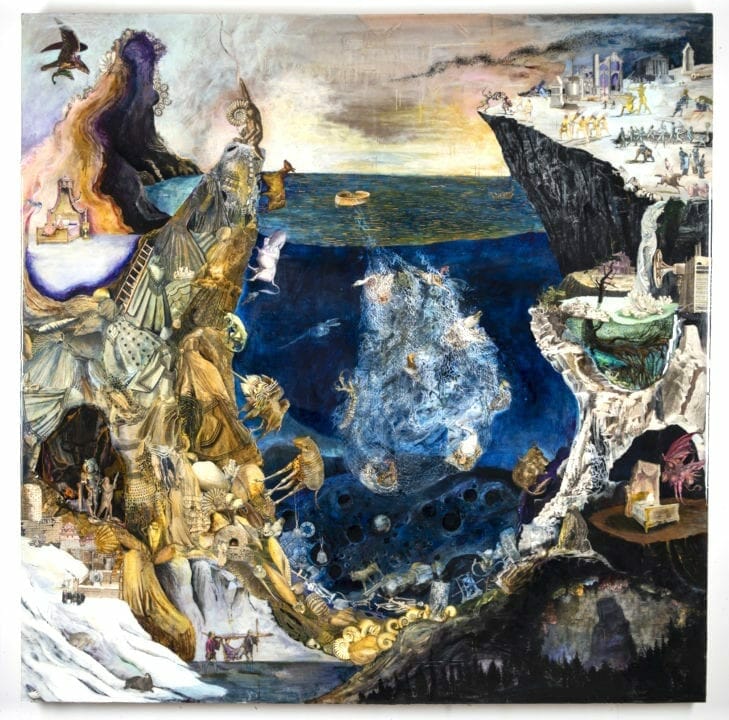 Josh Dorman’s impressive “How This Will End” collage is 4 feet by 4 feet.

That sort of key would be impossible, and beside the point. These works are not allegories. They are intuitive, yet only partly surreal, acts of free association shaped by a great deal of background knowledge. The collaged images may come from scientific sources, but their final arrangement is a matter of subconscious choices that outstrip rational ones in terms of impact, and sometimes insight as well. For that reason, Dorman’s work has been celebrated by similarly minded writers of experimental fiction, such as Paul Auster and Michael Chabon, both of whom use reason for deeply subrational purposes.

To make matters worse (or better), Dorman creates highly poetic animations that engage the viewer on the more contemporary ground of the moving image.

This is the sort of exhibition that should have been accompanied by an interdisciplinary conference, but Dorman is not a household name and such a conference likely would have been poorly attended. Still, this is the sort of show that opens dialogues far in excess of the work itself, which is spectacular enough to hold our attention long before its multiple implications sink in.

Within the planetary scope of the Anthropocene, multiple categories of humanity live out new and different destinies, and two or three inadvertently overlapping exhibitions make that abundantly clear. 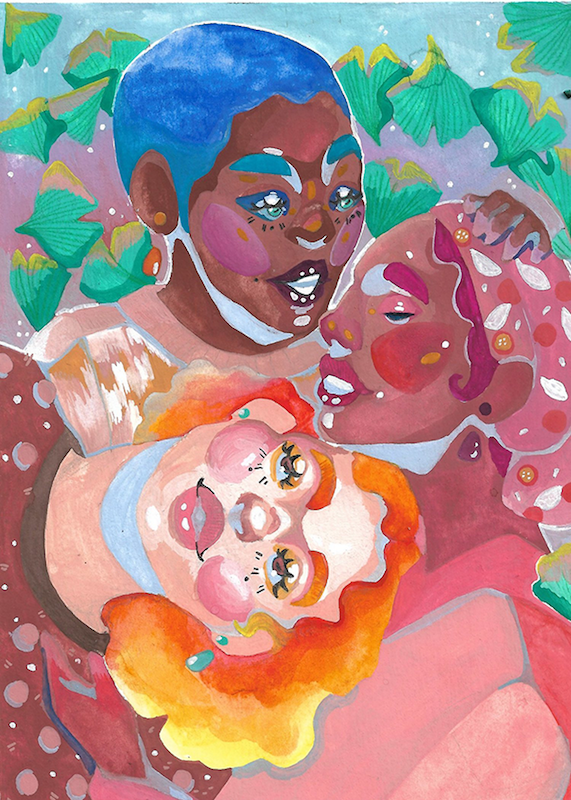 “Gingko Girls” by Chiomma Hall is part of the “Let Black Folx Be” show at The Bakery through March 5.

The Bakery has just opened Let Black Fxlk Be (through March 3), self-described as “a black queer art show” featuring artists Chiomma Hall, The Color Cienna, Talecia Tucker and others. Its combination of watercolor paintings, illustration and film photography reflects on queerness in the South and asks viewers to share a moment of community moving into the new year. The diverse works display love, friendship, community and identity with vulnerability.

The exhibit includes a workshop and artist talk at 2 p.m. March 1. Through March 5.

The ArtsXchange in East Point was founded some 40 years ago in response to challenges of community and identity. Through February 2, its Jack Sinclair Gallery presents Back in the Day: The Neighborhood Arts Center and Atlanta’s Late 1970’s Art Scene, an exhibition curated by Lisa Tuttle and Ric Washington. The show presents the history of exhibitions that sought to bridge racial and aesthetic chasms and bring communities together. Like The Bakery, today’s ArtsXchange seeks to respond to the challenges and realities of a moment in which diversity has become more diverse than ever, and the gulfs and collisions even more problematic.

378 Gallery’s Triad (through February 29) is a three-artist show that on some level addresses identity and the masculine condition, but the level is so multilayered and the identities so fluid it’s difficult to summarize what the diverse works of art by John Arge, Chris Beat and Robert Sherer are about. 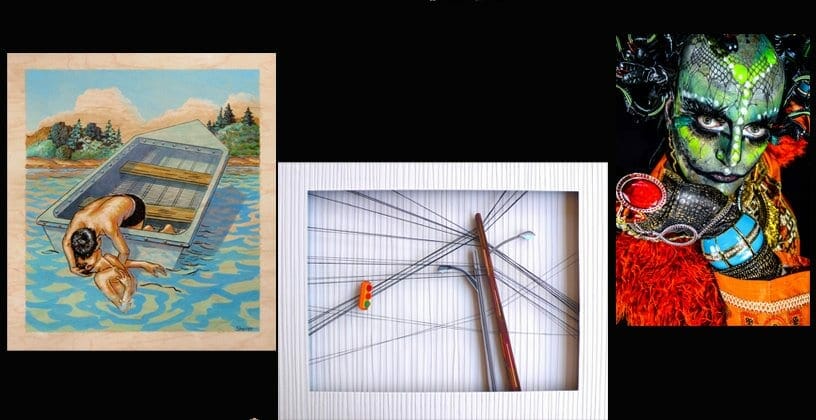 Artwork from “Triad” by (from left) Robert Sherer, John Arge and Chris Beat.

His Power Lines series, Arge says, features visions from the addresses of now-defunct Atlanta nightclubs; his Beauty Fades Into the Background series seems to spring from anything and everything his imagination creates.

The same goes, mostly for Beat and his long-running collaboration with model/designer David Richardson on a portrait series that is “an irreverent juxtaposition of the sacred and profane . . . reimagin[ing] mythological gods and goddesses in a postmodern world.” Perhaps the freshly launched book containing the photographs of this Deities project will permit greater consideration of “where we find meaning in a contemporary society characterized by titillation, ostentation and excess.”

Sherer’s appropriated images in wood-burned panels highlight the homoerotic subtext of 1950s Scouting manuals are well known, so it may be less necessary to contextualize them.