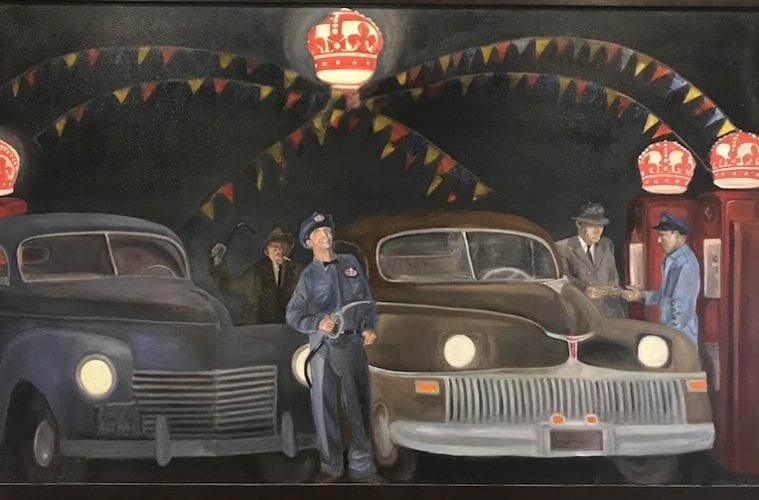 The oil painting "Red Crown is part of his "A Slice of the Pop Culture PIe" retrospective at 378 Gallery only through January 18. His paintings turn photos and ads from vintage magazines into a hallucinatory version of 1950s popular illustration.

Cullum’s Notebook: Fascinating art for thinking people with a certain sense of fun

Jerry Cullum’s Notebook is a monthly survey that highlights some of the more notable art + design happenings in metro Atlanta. Cullum has written about art + design in Atlanta, and beyond, for decades.

In a year in which four front-runners in the presidential race (including the incumbent) are in their 70s, perhaps it should come as no surprise that January begins with major shows by two largely overlooked artists in the 60-plus age group.

In fact, Art Vandenberg’s Three Score and Ten — Books of Art (at Poem 88 through January 18) concludes on the Atlanta artist’s 70th birthday with a 2 p.m. reception. The show has transformed five decades of Vandenberg’s idea-laden sketchbooks into 70 print-on-demand volumes produced in single-copy editions. The most provocative combinations of notes and drawings have been scanned and reproduced in a wall-filling grid format. One related set of drawings has been turned into a wall-sculpture scroll that can be wound from one roller to the other. Vandenberg’s juxtapositions of written and pictorial elements can be mind-bending, shifting from collage-making rules to hypotheses about the limits of knowledge and descriptions of relevant dreams. This vast array of knowledge and imagination is impressive enough, but Vandenberg ups the ante with a playful tone. He combines poetry, profundity and occasional slapstick in pursuit of Art — and the double meaning of “Art” as “artwork” and as the artist’s first name — is a play on words that Vandenberg uses himself. I’m tempted to explore his use of the all-caps “HIMSELF,” but this is better explored with Vandenberg himself, who’ll be at the gallery from 11 a.m. to 4 p.m. Saturday (January 11) and at the show’s closing.

Jim Wakeman, whose A Slice of the Pop Culture Pie is at 378 Gallery (through January 18), is very nearly Vandenberg’s polar opposite despite their shared tendency to engage in wildly associative connections. In this 20-year retrospective from the Avondale Estates artist, the paintings combine figures from vintage magazine photos and ads into a hallucinatory version of 1950s popular illustration that brings the flavor of genuine surrealism into a genre of art that too often settles for hip critique or nostalgic irony.

We may not know why the figure from a Quaker Oats box is lurking outside a window with a gun in one painting or feeding oatmeal to an injured Canadian Mountie in another, but on some level it scarcely matters. This is the dream logic of surrealism without the self-important tone that undermines so much second-tier surrealist art. Whether he portrays moviegoers wearing 3-D glasses as they engage in passionate back-row make-out sessions or renders stereotypical cowboys and Indians in all their offensiveness to present-day sensibilities, Wakeman pursues a vision that is distinctly his own. A painting from the Chase King “Where Do We Come From?” exhibition in the downstairs space at 378 Gallery.

The exhibition Where We Do Come From? in 378’s downstairs gallery comes from Woodstock’s Chase King, a younger painter who’s tough to categorize. His expressionist renderings of flora and fauna address the immense question asked in his title, a quote from a portion of the title of a famous Paul Gauguin painting.

Unlike Wakeman, whose work has rarely been exhibited in recent years, King exhibits frequently in Atlanta’s burgeoning DIY gallery scene and elsewhere, and his exploratory expressionism has gained some degree of recognition. Viewers may or may not experience the mythic depth that King intends, but his paintings clearly stir emotions. Atlanta-born Robert Hightower lands somewhere between the niches of Vandenberg, Wakeman and King. He returns to Atlanta with a conceptually ambitious immersive short-term installation The Apocalypse Simulacra at Spalding Nix Fine Art (January 18–29). The gallery promises a show that reflects the skills Hightower honed in his New York design years, a combination of “stage-set constructions, ready-made plastic models and paintings.” They’ll create, the gallery says in promotional material, “a narrative presentation of the twilight of humanity, at the fulcrum of extinction.” Note: Hightower’s 6 p.m. opening reception January 18 dovetails nicely with Vandenberg’s closing event.

For some of us, going from a closing that marks the beginning of another year to an opening that seeks to define the possible ending of pretty much everything might provide one of the more uniquely stimulating experiences of 2020.