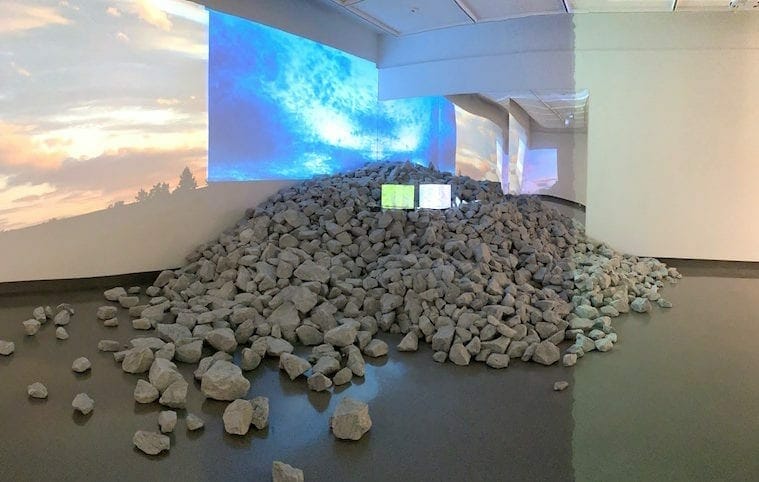 "Sky Box Mirror" by Atlanta artist MaDora Frey, is part of her "Stargaze" exhibition at Georgia State University's Ernest G. Welch Gallery through Friday only. She primarily does sculptural paintings and installations.

Cullum’s Notebook: Four to see — at GSU, Whitespace, Sandler Hudson — if you hurry

Jerry Cullum’s Notebook is a monthly survey that highlights some of the more notable art + design happenings in metro Atlanta. Cullum, the winner of a 2020 Rabkin Prize for arts journalism, has written about the art world in Atlanta and beyond for decades.

Like many other art exhibitions in 2020, two shows at Georgia State University’s Ernest G. Welch Gallery are about to close with less recognition than they deserve. MaDora Frey’s Stargaze presents such things as (quoting from her eloquent artist’s statement) “the disappearing light of a summer evening” in mirrored panels atop an immense pile of (by Frey’s calculation), eight tons of granite. That alone would make it worthy of attention, without its videos and sculptural elements designed to evoke “a mode of viewing, one in which recognizing our insignificance in the cosmos brings a sense of wonderment and transcendence.” The use of materials with mystical and mythical associations creates a space in which, given time by the viewer for sufficient immersion, contemplation can blossom. 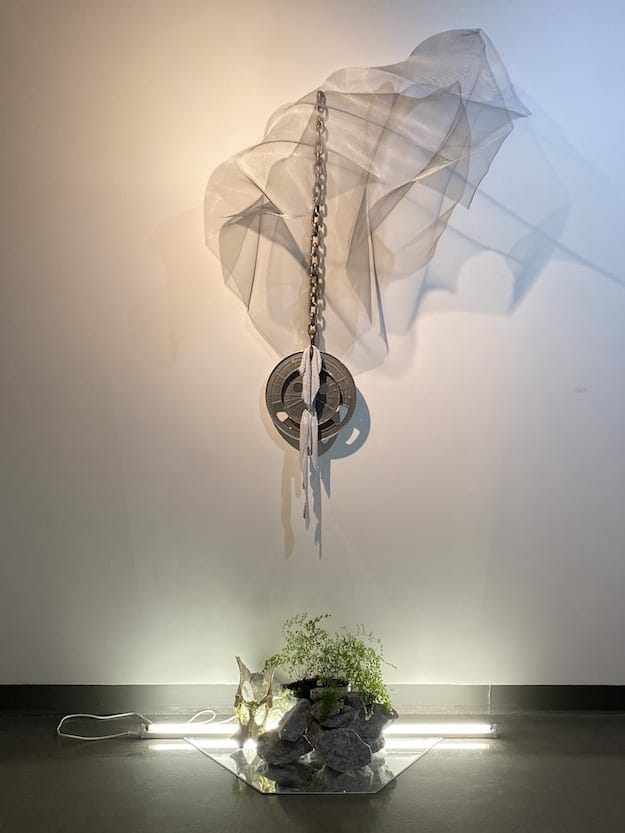 A Facsimile of Events, a companion exhibition by New York-based curator Jesse Penridge, presents a visual dialogue among the documentation left by land artists of the 1970s and the alterations of nature that Fredric Law Olmsted planned for his linear parks along Atlanta’s Ponce de Leon Avenue. The sheer variety of interactions between vast stretches of nature and the artist’s mind and body allows the viewer to think differently, not just about the desert Southwest or Niagara Falls, but about the stretches of greenery on a major east-west traffic artery that ordinarily go by in a barely noticed blur.

Together the two exhibits — both up through Friday (November 13) — illustrate the value of a university gallery in its capacity to combine a fresh show by an Atlanta artist with a companion show that sets the past in a new context. No commercial space could afford to present such an ambitious range of work that challenges viewer expectations and, for the most part, cannot be sold.

Because of COVID-19, Georgia State requires sign-up in advance but same-day and almost same-hour time slots are available.

Whitespace’s three venues present their own challenging vision of humanity in the natural environment. Stephanie Dowda DeMer’s Sandbagging (a field manual for care) in Whitespace itself, and Dorothy O’Connor’s A Long Walk is in the Whitespec project space and freestanding Shedspace through December 5.

DeMer’s photographs of stacked sandbags and placid-looking but threatened undergrowth are accompanied by an allegorical video in which the narrative moves from tranquility to well-nigh mythic apocalypse. O’Connor presents a more unified approach to human beings in natural surroundings in color photographs in which their bodies and their clothing become part of the environment (some black-and-white prints have a more disturbing undertone). The Whitespec photos are accompanied by arrangements of branches and birds’ nests that rhyme remarkably with the photographic artwork. The Shedspace installation continues the theme in site-specific style.

Whitespace requires masks and admits four viewers to the main gallery, two to Whitespec and one to Shedspace at any one time.

Renée Stout’s “Hoodoo Assassin #6 (the Chameleon)” is part of the “Before, During and After” exhibit at Sandler Hudson. The 2019 piece — oil on handmade paper — measures 12 x 12 inches.

Another case of art that deserves greater attention is the group show Before, During and After at Sandler Hudson Gallery through November 28. Renée Stout’s Hoodoo Assassin #6 (the Chameleon) is probably the star of this collection of single works by 17 gallery artists, but the whole show is full of unanticipated pleasures. The standouts include Michael Reese’s Georgia Emancipatory Iteration #1, Don Cooper’s EM1 and Michele Schuff’s Rubicon. The entire show is presented in an attractive online catalog.