Michael Haverty always knew that adapting Albert Camus’ 1942 novel L’ Etranger / The Stranger would be challenging. And he always envisioned it in its workshop versions as live theater with projected film elements. When COVID-19 locked everyone down, he had to change course. The Stranger has morphed into a full-fledged puppet–film adaptation.

The world premiere opens Thursday (November 12) and runs for four nights via the  7 Stages website, as part of the company’s Home Brew @ Home series. Talkbacks are planned on opening night and after the 1 p.m. Sunday performance. Tickets are FREE. 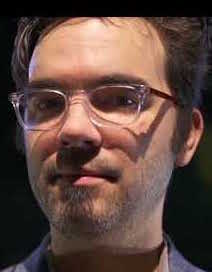 The Stranger comes with Punch and Judy-style hand puppets and noir / New Wave cinema animation. It’s coproduced by Haverty’s nonprofit The Object Group — he’s been producing artistic director since its creation in 2012 — and 7 Stages. The venture allows him to do “wacky” events, he says, such as installation and performance art. The Object Group usually does multimedia theater for adult audiences that blends puppetry, live actors, experimental movement and sound (Gilgamesh and William Faulkner’s As I Lay Dying, for example).

When Haverty joined the 7 Stages administrative staff later in 2012, The Object Group grew dormant. When he left 7 Stages in 2018, he returned his full attention to it.

Haverty has worked on a few major Object Group projects — including a walking version of 20,000 Leagues under the Sea at the Georgia Aquarium four years ago — but The Stranger is by far his biggest production. It’s set during France’s colonial occupation of Algeria and explores such themes as the lack of empathy in Western society, the effects of oppression on society and the soul, and cultural alienation as its central character (Meursault) attends his mother’s funeral and later kills a man.

The Stranger has always been one of Haverty’s favorite books, one that people still talk and write about. It’s also full of depth, he says. As he was adapting it, he realized anew how complex and messy it is. “I had always loved it for the antihero feeling, the absurdity, and it being set in a historical period was fascinating to me,” Haverty says.

All of the characters in the show. Meursault (center) is in the prison uniform, with X’s for eyes.

“Once I dug into it I realized how perfect it is for right now,” he says. “I feel that the author was born into a very specific historical situation — an apartheid society — and as hard as he tried to get out of it, he was educated in a certain way and had developed as a person who devalued Arab people. He had a way of looking at them that wasn’t quite as human as he was, as a Frenchman. I felt there was a lot missing in the conversation about this.”

Haverty’s goal is to give the work more context and a more critical reading. The Arabs in the book, for instance, do not speak, do not have names and the audience rarely sees them. “When the main character sees them he describes them as rocks or dead trees that are just there,” Haverty says. “I think it’s here that Camus misses. He still portrays Arabs as scary or not human. We try to point that out: ‘How is the main character misunderstanding the situation?’ We give more breadth to the Arabs, not portraying them like Camus portrays them.”

The decision to use Punch and Judy puppets fits. “Punch is the ultimate antihero who doesn’t care about anything,” Haverty says. “By translating that this way it becomes funny. It’s easier to laugh at the absurdity, but it also plays up how controlled and caricatured these characters are.”

Meursault (far left, in prison stripes) has his day in court.

Haverty says that in his happy-go-lucky attitude and ability to care only about what makes him feel good, Meursault reminds him of Donald Trump. When Meursault kills an Arab, nothing happens to him. It’s almost impossible not to see the parallels to today. “White supremacy is the root of Camus’ problems and those of Meursault,” Haverty says.” The societal and psychological privilege that allows Camus’ characters to treat Arabs as less than human is the same privilege that today blinds so many White Americans to the concerns and experiences of BIPOC individuals.”

The Stranger was always meant to debut in the fall, albeit a bit earlier. When the quarantine came down in March, the team decided to make it a film, not just a filmed version of a play.

The team — Haverty directed and designed sound and video, Bryan Mercer directed and Marium Khalid codirected — worked on the project for year, filming it this fall. Haverty invited performer / puppeteers Luis Hernandez and Jake Krakovsky to his home in September. The sound design, which is striking, if a bit unnerving, is mostly a combination of soundtrack clips from French and Czech New Wave cinema.

“We felt more comfortable with what SAG had done with safety precautions for puppeteers working in film,” Haverty says. “Plenty of puppet work is still going on. We were masked the entire time, took temperatures and got tested. We got through it and I am glad that my puppeteers were safe.”

For Haverty, deciding to do the a film made perfect sense, and he felt that it was in his artistic wheelhouse. “I realized pretty quickly I could adapt this to film. I feel lucky to have been in puppetry as long as I have. It lends itself to film. It was more natural. I do look forward to being onstage again, but I was so happy just to work again with a group.”