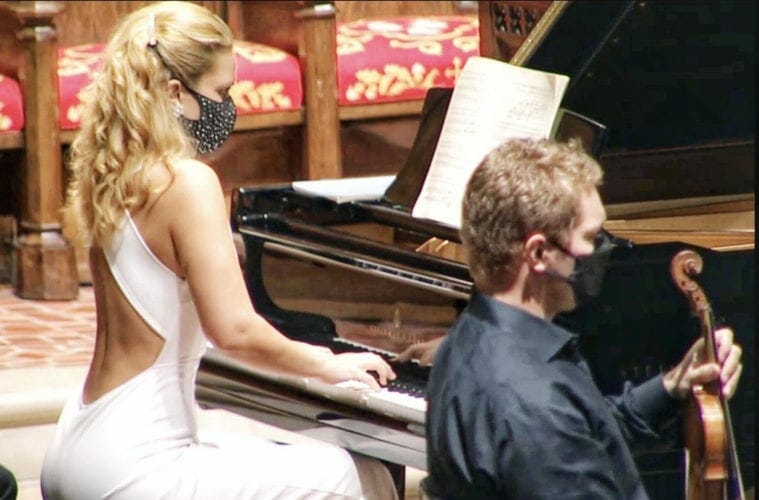 Siblings David Coucheron and Julie Coucheron were among the chamber music players who performed Sunday. Their joy to be back in front of an audience was palpable.

Review: An all-star session of chamber music players relish return to the stage

The hermetic life of the COVID-19 lockdown has hit the music world especially hard with performers and concert-goers unable to indulge in the therapeutic, medicinal ritual of the live event. Having not enjoyed a good concert myself since February, the announcement of an all-star chamber music concert at First Presbyterian Church of Atlanta — before a small, socially distanced audience and also livestreamed — was a welcome surprise and blessed relief (see a video of the concert, go HERE).

Described in event organizer Julie Coucheron’s opening remarks as “a lot of fun, random pieces,” the afternoon’s conceptual focus seemed to be less on celebrating specific composers and more on the restorative power of the concert experience.

It was indeed clear from the opening strains of Robert Schumann’s Piano Quintet, Op. 44 part IV: Allegro ma non troppo that these were players who had been chomping at the bit, straining for a much needed return to live performance. The piece erupted like rolling thunder — deep and majestic but tinged with an energetic undercurrent of enthusiastic intensity. There was an almost confrontational sense of intimacy to the playing, as though one were witness to a far more private act than a mere concert. That feeling would permeate the afternoon’s proceedings with performers who were clearly enjoying themselves and even indulging in that one concept that is so often illusory in the classical world: fun.

Featured prominently throughout the afternoon were the Coucheron siblings — pianist Julie and violinist David, concertmaster for the Atlanta Symphony Orchestra. Performing in the more intimate confines of First Presbyterian afforded David Coucheron the opportunity to be heard in greater detail, no longer constrained by the acoustics of Atlanta Symphony Hall, which so often elevate the ensemble and blunt the soloist. He turned in a startlingly rich, brooding performance that captured a level of tonal depth and detail often eschewed in the ASO’s more large-scale works. Of particular note was his playing with the Vega Quartet on Beethoven’s String Quartet No. 11 in F Minor Op. 95 Part IV: Allegro, with its dark, sonorous opening.

Julie Coucheron emerged with a dazzling display of virtuosity on Mendelssohn’s Piano Trio No. 1 in D Minor, dancing nimbly in and out of her brother’s remarkably mournful, almost sinister, melodic passages. She returned to shine again on a duet for single piano alongside William Ransom, performing a stripped-down rendition of Tchaikovsky’s Waltz of the Flowers and her delicate tones on Piazzolla’s Oblivion, providing a lush, willowy backdrop for the swirling phrases laid down by violinist Helen Kim and cellist Charae Krueger.

If the evening suffered at all it was in Wieniawski’s Duo for Two Violins, which felt less like a duet and more like a forum for directionless virtuosity. While this would owe more to the composer than the performers, it still seemed superfluous. On a similarly unfortunate note, soprano Maria Valdes’ performance of La Boheme: Donde lieta usci felt mired in a thick and often distracting vibrato.

Perhaps the afternoon’s most surprising standout came from trumpeter Stuart Stephenson’s showstopping performances on the Aria from J.S. Bach’s Jauchzet Gott in allen Landen and Giuseppe Torelli’s three-part Trumpet Concerto in D. Stephenson is, simply, a master of tonality, drawing from his horn a pure, unadulterated sound that allows the melody to exist on a transcendental, eternally pleasing level. He is truly a player to watch.

With COVID-19 rendering the live music world painfully dormant for the better part of 2020, the announcement of the Concerts@First series is a gentle reminder that there is light at the end of the social-distancing tunnel. With an entire series of events planned through May 2021, Concerts@First promises the first morsels of sustenance to a city starving for live music.